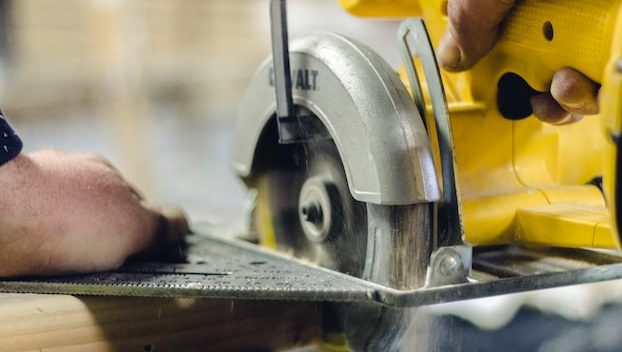 FARMVILLE – Parents want fenced-in play areas at Prince Edward County schools. They also want metal detectors, locks on bathroom stalls and panic buttons for all teachers and staff. Those were some of the 20 responses the school district received from a survey given out over the last month. Now the school board will take that list, add it to another one from district staff and determine what projects get priority.

As part of the state budget this year, the General Assembly set aside funds to help school districts with construction needs. Prince Edward County Public Schools received $1.4 million out of that allotment. There are some rules for the money, however. First, it can’t be spent on sports facilities. Second, it can’t be spent on parking lots or roads, anything that the Virginia Department of Transportation or a local county typically funds. Finally, these have to be projects that can be at least started within a year’s timeframe, as the money has to be spent by June 30, 2023.

The district staff, teachers and other administrators first put together a list of what projects they wanted to see. That included repairing parts of the roof at Prince Edward High, upgrading the PA system at the middle school gym and upgrading the marquee signs at all schools.

“Everybody on our team, for instance, wanted the marquees,” Prince Edward County Superintendent Dr. Barbara Johnson told the school board at their Oct. 5 meeting. “I really wanted the auditorium renovated, but they overruled me and said no, bathrooms are more important. The touchless sinks, the touchless paper towel dispensers are more important and they were right.”

The administrative list also calls for bathrooms to be upgraded, including stalls and the aforementioned touchless sinks and paper towel dispensers, which would be activated by motion.

There is nothing on the administrative list about the elementary school. That, Johnson said, was by design.

“There is nothing because the goal for the elementary school is renovation,” Johnson said.

Instead of patching issues, Johnson and her staff are working to get funding for a full renovation of the elementary. That would address issues like the continuing leaks in the building. 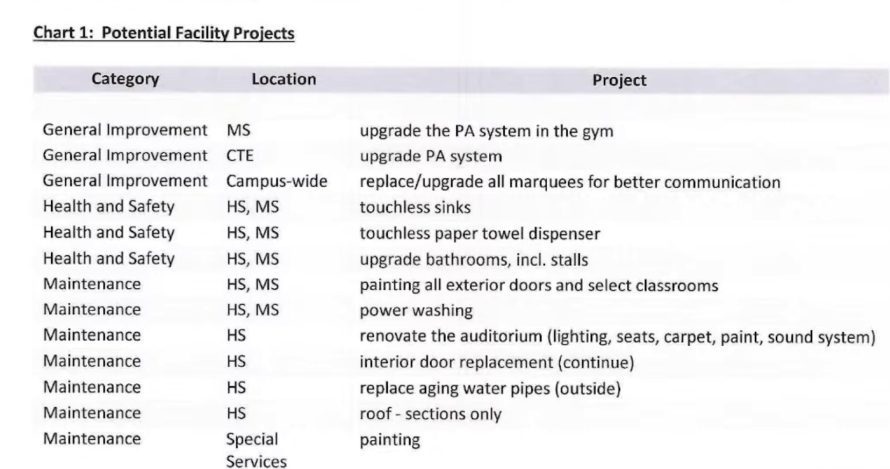 A look at projects recommended by district staff members.

In addition to school administrators, the district staff reached out to the Prince Edward community. They asked what parents and other residents saw as priorities, keeping the survey up on their website until Monday, Oct. 3.

One of the most requested changes involved door security at all entry points. In the wake of school shootings across the country, parents wanted to see entry doors locked and secured at all schools in Prince Edward County.

They also asked for an alarm system at all schools, alerting staff when outside doors are left open.

“If a door is left open for more than five minutes at a time, someone in the front office would know,” Johnson said.

Multiple people also asked for an emergency text system to be set up. This is similar to a panic button (which was also requested). The idea is that when there’s a crisis, an administrator could text and notify everyone on the campus very quietly. They could also notify the police department this way rather than having to call.

Also on the list were requests for bathroom renovations, locks on bathroom stalls, repairs to the gym floors at all schools and new classroom HVAC units.

There were also suggestions about building a sports complex, but that would take much more than $1.4 million to finish. For example, the new soccer and baseball sports complex that opened last April in Abingdon took $12 million to complete. And that one only made it across the finish line due to several million in American Rescue Plan funds. Louisa County is currently discussing a sports complex as well, with the price tag coming in at $16.5 million. Also, as mentioned earlier, these funds can’t be used for that.

“We cannot use this $1.4 million for parking lots and we cannot use it to build or renovate sports facilities,” Johnson said. “We couldn’t use this money for the track, for instance.” 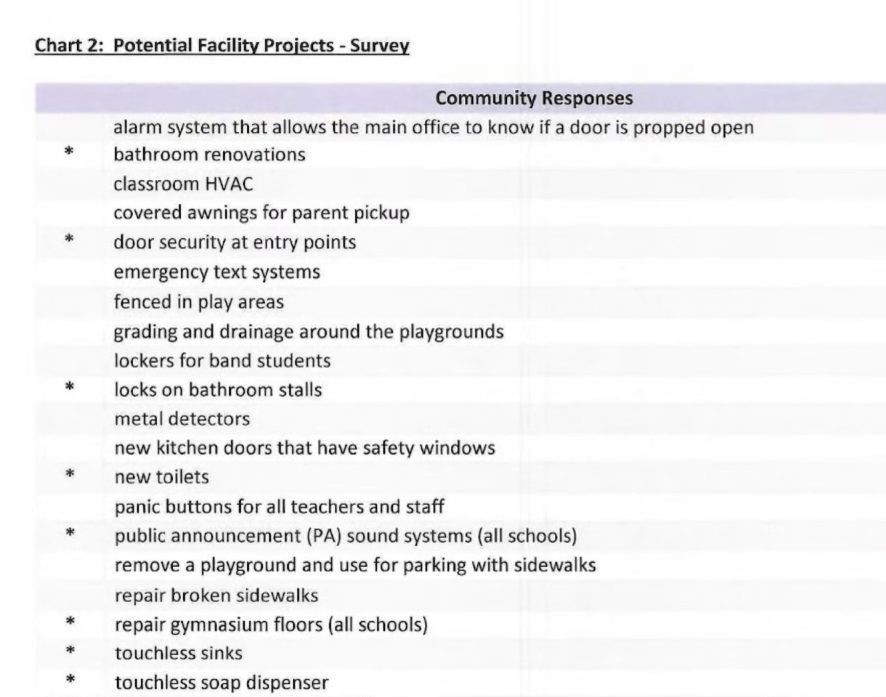 A look at the 20 responses the school district received, when they asked residents to identify the most needed projects. Any with an asterisk beside it means it was mentioned by multiple people.

How do projects rank?

With that in mind, Johnson asked the school board what projects they’d like to prioritize out of the combined list. Before that happens, board members said, they need more information.

“I need to know how much these things cost,” said school board member Susan Kimbrough. She pointed out that one bathroom renovation could cost as much as 5 to 10 other projects and wanted to get as many done as possible.

Johnson said staff members are working on that and should have numbers for the board’s next meeting.

Kelly Forsythe, who just took over as the interim representative for Ward A, asked if there was a division safety committee who identified any immediate safety needs.

“We do have a safety committee,” Johnson said. “The safety committee has not listed anything that we necessarily need to do. (We work) with the sheriff’s office every year. We look at all blind spots on the campus, things we need from a safety perspective.”

Forsythe also asked if there was a way to get student input, to identify the issues students see on a daily basis. She was told they would look into that as well.

Other board members wanted to add their own items to the capital improvement list. One suggestion included installing cameras in all classrooms. Another focused on replacing all leaky windows. A third, by Kimbrough, involved telephones.

“We don’t have telephones in the classrooms for our teachers and that feels like it is a safety issue and just a communications issue,” Kimbrough said. “They need a telephone.”

To be clear, she was talking about installing landline phones, rather than cell phones.

What happens next for Prince Edward County schools?

In the end, board members agreed that there wasn’t enough information to prioritize five projects as requested. Instead, they asked that costs for each of the items on the list be researched, with at least estimates given out at the next board meeting in November.