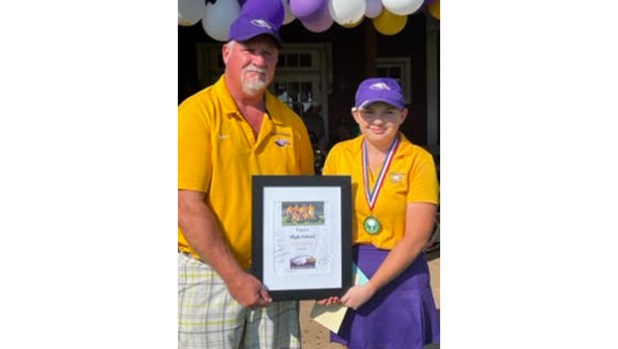 Prince Edward senior Emma Lewis moves on to compete at the state tournament in golf this week. She’s pictured here with her coach, Mike Weaver, during the high school’s senior night event. 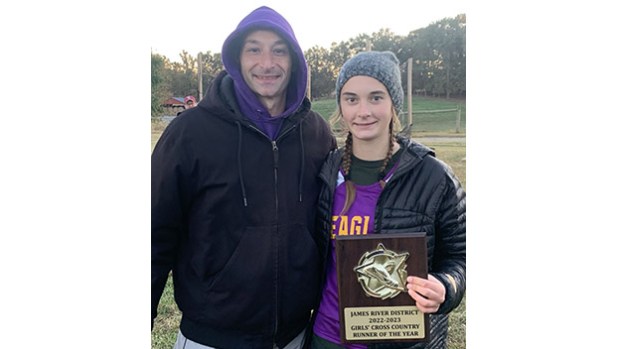 Sylvia Hemmer is pictured here after winning her cross country event with her coach, Aaron Barber.

Over the last few weeks, several athletes from Prince Edward County High won local and regional competitions, picking up trophies and moving on to bigger events.

It’s been a busy month for Emma Lewis. The Prince Edward senior won the James River District golf tournament with a low score of 79. She then went on to the Girls Regional Qualifier, held on Monday, Oct. 17 at Greens Folly in Halifax County. She shot a 79 there as well, winning the Zone 8 qualifier and earning a trip to the Virginia Girls State Golf Tournament, which took place this week.

Emma shot an 86 at the state tournament. That +14 was good enough for 35th place on the state level.

She and the Prince Edward County High Cross Country Team will move on now to regional competition, taking part in the Region 2A Cross Country Meet on Wednesday, Nov. 2. That’ll be held at 1 p.m. at the Bruton High School Cross Country Course in Williamsburg.