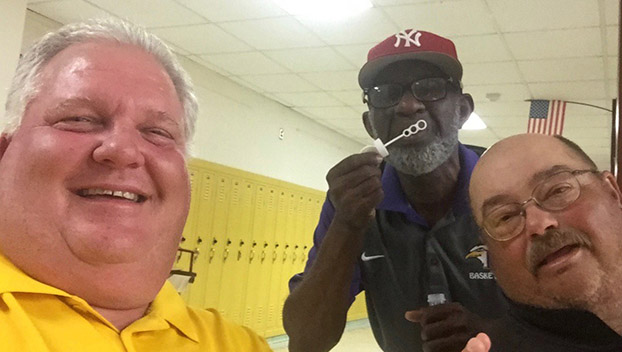 FARMVILLE – Everyone knew Marvin Meadows. And that didn’t end when you left Prince Edward County.

“Whenever I went anywhere in the state, after finding out I was from Prince Edward County, high school coaches and athletic directors would say ‘you work with Marvin Meadows’ and then proceed to tell me a Marvin Meadows story,” said Rodney Kane. Kane, who serves as Athletic Director for Prince Edward County High School, said that was just the way Meadows was. He left an impression wherever he went.

“Everyone that met Marvin Meadows will not forget him,” Kane said. “He made a difference in the lives of our students at Prince Edward County High School.”

Meadows passed away at the age of 64 on Tuesday, Oct. 11. Born in Farmville on Nov. 22, 1957, athletics caught his attention from an early age. He started playing baseball at the age of 7. At Cumberland High, he lettered in football and baseball, before also discovering a passion for golf.

He was also a two-sport star in college, playing both baseball and golf at North Carolina Wesleyan College. Once out of college, he made his way back to Prince Edward County, becoming a teacher and coach to help future generations. And help he did. For 40 years, Meadows taught and coached at the school, encouraging students to give their best in all things.

Former students and faculty alike recall a saying of his, when asked why players were pushed at practice.

Meadows coached for more than 20 years at the school, leading the girls’ high school volleyball team to over 242 wins. That included 14 district titles, 15 district tournament championships, 15 regional tournament appearances and two state tournament appearances. He was named district coach of the year 12 times in his career, in three different districts. Meadows also was voted regional coach of the year twice. He coached Prince Edward’s softball team, managed the game clock for basketball games, led the golf team and generally did everything possible to help when needed.

“Mr. Meadows was an inspiration to all who knew him.” said Prince Edward County High Principal Gwendolyn McQuaige-Hicks.

Even beyond the classroom and the field, Meadows stood out. He was real. That’s something The Herald staff heard time and time again, when asking people for their memories of Marvin Meadows. He was a real person who loved his students, loved his players and loved his community.

From volunteering to go as a field trip chaperone to helping a local basketball league that needed a clock operator, everyone has a Marvin Meadows story. And they all either start or end with the same sentence. “He will always be remembered”.