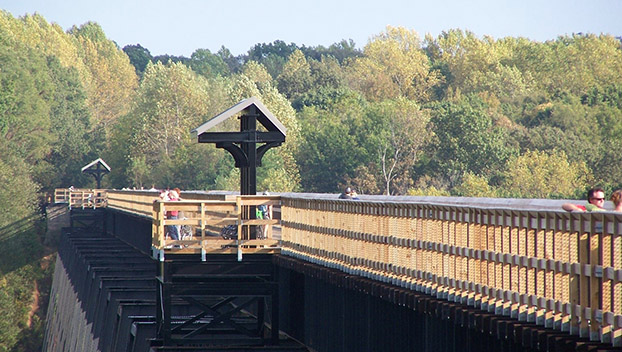 Since the beginning, when High Bridge Trail State Park came into being, there was a plan to do more. Those early conversations in 2006 included more than just what we know as the park right now. During the pandemic, the first of two final pieces was added and soon, the expansion project will begin.

Officials with Virginia State Parks will be in charge of the project. High Bridge Park Manager Daniel Jordan said the goal here is to improve the overall park experience for both frequent and new visitors.

What will the expansion involve?

In 2006, Norfolk Southern Railway donated 31.2 miles to be developed into a rails to trail, he added. The railroad kept approximately 1.25 miles on the Burkeville end (east) and 1 mile on the Pamplin end (west) to be used as rail storage.

“In 2020, Norfolk Southern sold the last mile into Pamplin, which would allow the trail to expand into the Town of Pamplin,” Jordan said. “After this sale, Norfolk Southern and Department of Conservation and Recreation began the process of purchasing the Burkeville end of the trail, which we hope to have

finalized in 2023. Both of these acquisitions will anchor the trail on the east and west. The trail currently ends in the middle of the woods on the east and at a roadway on the west. These anchors will improve the overall visitor experience for park guests and will benefit the towns along the trail.”

Jordan also notes how the expansion plan has been in the works since the beginning.

“This was the plan from the beginning, that the additional line would one day be sold to Department of Conservation and Recreation,” Jordan said. “After these two acquisitions, the trail will be fully built out along the old rail line.”

Jordan discussed how the new change will provide a much better experience for High Bridge Trail visitors such as improving parking and the various racing events the park holds.

“It will allow better access and an enhanced visitor experience,” he said. “As mentioned, at this time the trail just ends at not so amazing spots. With the expansion, it will allow users the ability to park at one end or the other to enjoy the trail. With this there are numerous benefits, parking to more amenities, ultra marathons can run the course completely on the trail (they currently run on side roads in Pamplin for the last mile), and an economic opportunity to these small towns.”