Happy To Be Here: Let’s talk about freedom of speech 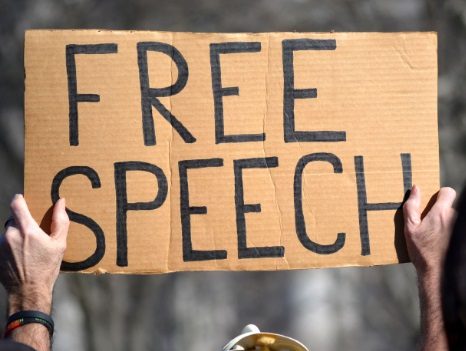 Last August, author Salman Rushdie was attacked and seriously injured while onstage for a panel discussion at the Chautauqua Institution in western New York. Chautauqua was founded in 1874 to provide an opportunity to learn while vacationing. It continues today as a community that fosters appreciation of the arts, encourages interfaith dialog, and provides a venue for discussing freedom of speech and a wide variety of public issues.

The book allegedly behind the assault was Rushdie’s The Satanic Verses, published in 1988. I’ve read it. Twice. It presents an abstract, surrealistic blend of social issues and symbolism. It recognizes the way history bleeds into the present. It is a profound, creative work of fiction.

Rushdie’s style blends magic and realism, presenting splinters of concepts as if viewed through a kaleidoscope. I love it. His style lets me enter the story in a way that challenges my preconceptions. It encourages me to consider what the characters, their actions, and the story’s symbols might mean from multiple perspectives.

Admittedly, this fantastical, bizarre style isn’t for everyone. Some people prefer books that feature stories built from the narration of events along a series of unambiguous plot points that lead to a satisfying denouement. If this describes your literary taste, you can probably skip Rushdie. But please don’t condemn him.

According to some news reports, the man accused of attacking Rushdie had read only two pages of the book. My copy runs 561 pages. A two-page excerpt, especially from a nonliteral work, cannot be understood in context. Although I haven’t seen confirmational details, some reporters speculated that the assault may have been inspired by a “fatwa” (an Islamic legal ruling) accusing Rushdie of blasphemy and calling for his death. It was issued by Iran’s Ayatollah Kohmeini more than three decades ago.

Before you chalk this anti–free speech episode up to Islamic extremism, I would like to reflect on some similar dark times in Christian history. For just one example: Do you remember William Tyndale, the linguist responsible for the first translation of the Bible from its original languages into common English? As a result of his work and his opinions, he was condemned for heresy and executed in 1536.

Ancient history? Perhaps, but such episodes were known to the American Founding Fathers when they created the Bill of Rights. These ten amendments to the Constitution were ratified on December 15, 1791. The very first among them guarantees important freedoms, including freedom of religion and of speech. Still, throughout our country’s history, books have been banned and burned, including many that are considered classics.

Here are just a few examples: Uncle Tom’s Cabin, written by Harriet Beecher Stowe in 1852, was banned in many communities because of its anti-slavery theme. It is still sometimes challenged because it includes racially charged language. Elmer Gantry, written by Sinclair Lewis in 1927, is among a lengthy list of titles that gained notoriety for being banned in Boston.

It was banned in other places as well. Religious critics complained about its unfavorable portrayal of a preacher who was hypocritical. The Grapes of Wrath, written by John Steinbeck in 1939 (and honored with the Pulitzer Prize in Fiction in 1940), was banned in multiple localities, including some in California, because of a few words deemed obscene and its thematic content, which negatively (and some said unfairly) depicted migrant labor practices.

There are more. A lot more. A list compiled by the American Library Association of the 100 most frequently banned and challenged books during the decade 2010–2019 includes these well-known titles: The Bluest Eye, by Toni Morrison; The Kite Runner, by Kahled Hosseini; To Kill a Mockingbird, by Harper Lee; Nickel and Dimed, by Barbara Ehrenreich; Anne Frank: Diary of a Young Girl, by Anne Frank; Ender’s Game, by Orson Scott Card; I Know Why the Caged Bird Sings, by Maya Angelou; and even The Holy Bible.

Banned Books Week was observed September 18–24. It draws attention to the problem of censorship, which limits freedom of speech, access to information and hinders conversation about notable topics. If you’d like to show your support for authors who dare to share important stories, consider reading a book that has been challenged or banned.

Karen Bellenir has been writing for The Farmville Herald since 2009. Her book, Happy to Be Here: A Transplant Takes Root in Farmville, Virginia features a compilation of her columns. It is available from PierPress.com. You can contact Karen at kbellenir@PierPress.com.

Matthew Sorenson: The Word — Light in the deep darkness