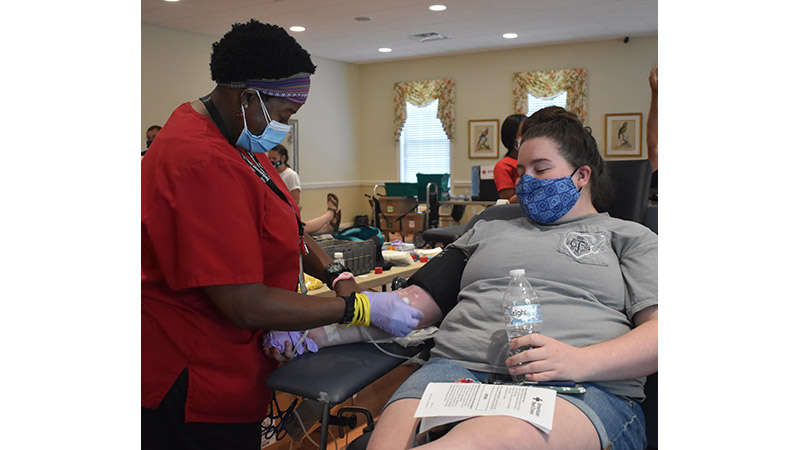 Phlebotomist Sharon Roberts helps to prepare Taylor Tyree for a donation. Tyree said she is a nursing student and gives blood often.

FARMVILLE – Hurricane Ian caused more than just physical damage. According to the American Red Cross, it also caused more than 130 blood drives to be canceled, with more expected in the next few days.

“We expect additional blood drive cancellations in the Southeast over the coming week,” said Christy Carneal with the Virginia Red Cross in a statement. “(Also), fewer donors (will likely) come out to donate at drives in and around affected areas due to poor weather conditions.”

Here in Farmville, we didn’t experience anywhere near the full extent of the storm. Yes, trees fell, lights flickered and some low lying areas saw some flooding. But our homes and cars weren’t carried off by water or ripped apart by wind. Those areas where that did happen, including Florida, Georgia and the Carolinas, need help. They need blood at a time when regions still haven’t fully recovered from the summer shortage.

Carneal said an estimated 29,000 units of red blood cells are needed every day in the country. That’s on a normal day, without any emergencies or severe weather. At Centra Southside in Farmville, red blood is used for surgeries, to treat people with chronic illnesses and in the emergency room. For example, a single car accident victim can require as many as 100 units of blood. And that can only come from donors.

Now add in the aftermath of a hurricane and you start to see the problem. There’s also one more issue. Blood doesn’t last long.

All blood types are needed, but two are in very short supply. Type O Negative red blood cells and Type AB blood plasma are the most needed. Only 7% of people across the country are Type O Negative, but they can be given to patients of any blood type, putting them in demand. The same goes for AB plasma, but it’s even more rare. Only 4% of people across the U.S. have Type AB blood.

So after saying all that, the big question is what can we do to help? The answer is you can give during one of the Farmville blood drives coming up. For example, St. John’s Lutheran Church, located at 1301 Milnwood Road, will hold a drive from 1 p.m. to 6 p.m. today. You can find out about more upcoming drives in the region by clicking here.