The Longwood University Chamber Music Series will present a concert by the internationally-renowned Julie Fowlis Group, on Sunday, Oct. 16. Free and open to the public, the concert will take place in the Molnar Recital Hall of Wygal Music Building at 4 p.m., with doors open at 3:30 p.m. Parking for the event is available along Race Street, beside Greenwood Library and Bedford Hall.

Julie Fowlis is a multi-award winning Gaelic singer who is deeply influenced by her upbringing in the Outer Hebridean island of North Uist. With a career spanning five studio albums and numerous high profile collaborations, her “crystalline and intoxicating” vocals have enchanted audiences around the world.

Nominated as Folk Singer of the year at the 2018 BBC Radio 2 Folk Music Awards and Best Artist at the Songline World Music Awards, Julie is a dynamic performer who has graced stages from village halls in the Scottish Highlands to Carnegie Hall in New York.

Julie sang live in 2012 at the closing ceremony of the Ryder Cup in Chicago to a TV audience of 500 million, and in 2014 she sang at the opening of the Commonwealth Games in Glasgow to a TV audience of over a billion. She will be forever recognized for singing the theme songs to Brave, Disney Pixar’s Oscar winning animated film set in the ancient highlands of Scotland.

The Julie Fowlis Group includes a trio of outstanding folk musicians: her husband, Eamon Doorley, on the bouzouki folk guitar, Duncan Chisholm on fiddle, and Tony Byrne, guitars. The upcoming performance marks their third visit to Farmville since 2012. The program, entitled “Lochs and Legends,” offers an enchanting sample of the language, songs, and stories of Julie’s native Scotland, with otherworldly themes of love, loss, lullabies, and fairy creatures. 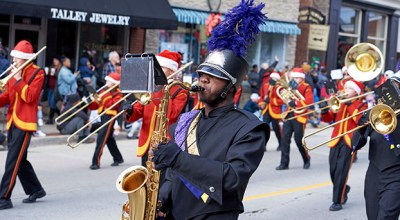