Are political signs allowed at the Prince Edward Courthouse? Yes and no. 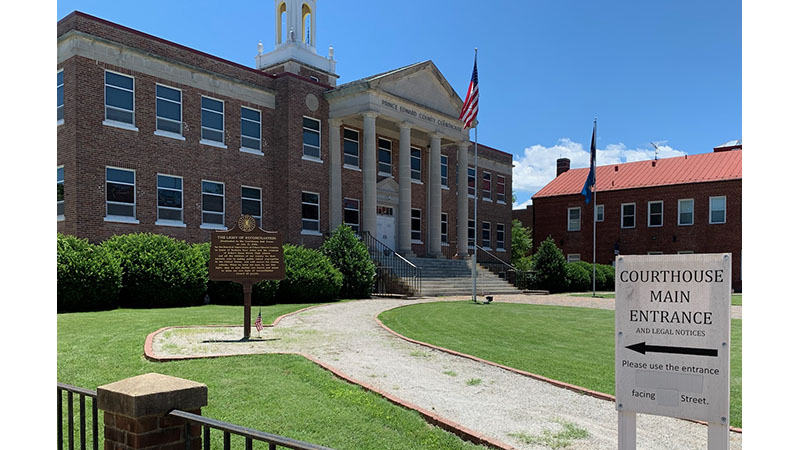 A look at the front lawn of the Prince Edward County Courthouse.

FARMVILLE – Can political signs be placed on property owned by Prince Edward County? And specifically, can they be placed at the Prince Edward Courthouse? That was the question raised this week by a local candidate, whose name was kept anonymous by county staff. And that was the question staff members asked the board of supervisors to answer during their Tuesday, Oct. 25 meeting.

“I think this is the first time in my almost 35 years that we’ve received this request,” said Assistant County Administrator Sarah Puckett.

Up until Tuesday night, Prince Edward County didn’t have a policy saying yes or no on the issue. And it is something counties have the authority to adjust. But because the Prince Edward County courthouse and Social Services building are used as polling places, state rules come into play here as well.

That goes especially for the courthouse, as it’s currently being used as an early voting site as well. Why does that matter? Section 24.2-604 of the Virginia Code states that during times the polls are open or within an hour of being open or closed, “it is unlawful for any person to loiter or congregate within 40 feet of any entrance of any polling place to give, tender or exhibit any ballot, ticket or other campaign material.” Political signs qualify as campaign material under the state code.

That means no signs within 40 feet of any entrance to either the courthouse or Social Services building.

“The way the Code is written, it’s not just the primary entrance,” Puckett said. “It would be any entrance where a potential voter could be influenced.”

Outside of that range, however, supervisors voted on Tuesday night to let candidates put signs up, with some restrictions.

What about the Prince Edward courthouse?

Puckett outlined several options to the board on Tuesday, explaining they could flat out ban political signs from all county properties, restrict them except on specific days or allow them outright, while also controlling the size and number.

“Recognizing that the campaign signs are an important public information part of elections, the county staff recommends a compromise,” Puckett said.

The staff’s recommendation was for political signs to be banned on all county-owned property except the two that are polling places. And even at those locations, candidates would be limited to just four signs each, with none allowed on sidewalks. These signs can be no more than 24 inches in height and up to 36 inches in width. Under the staff proposal, only wire supports can hold the signs up. No digging or wooden stakes allowed.

“We stipulated the size of the sign so we don’t have huge signs digging into the courthouse lawn,” Puckett said.

Supervisors unanimously adopted the recommendation, while also setting specific times when these signs will be allowed. On the day before the election, signs can be placed at the courthouse or Social Services building only after 6 p.m. Signs placed there beforehand will be removed. Campaigns can also place signs at both locations up until 7:30 p.m. on Election Day. But once those polls close, candidates need to pick all signs up on county property.

If the signs aren’t gone by 6 a.m. on the day after the election, that’s when county staff will step in.

“If they’re not gone, then county staff will remove them and store them,” Puckett said. “And if you don’t come get them, we will throw them away after 7 days.”

The board agreed to that as well, through a unanimous vote.