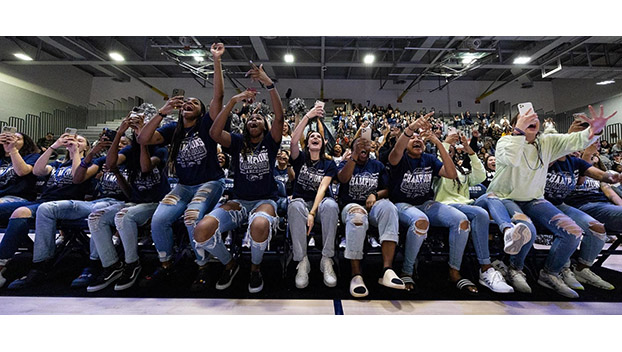 (MIKE KROPF) The Longwood women’s basketball team reacts to the announcement of who they will play during the Selection Sunday Watch Party.

The conference schedule is all set for Longwood women’s basketball, as the Big South Conference office released the full league schedule on Tuesday afternoon.

The path for Longwood to defend its Big South regular season and tournament title runs through every team in the league twice in an 18-game conference slate.

The Lancers will do so under first-year head coach Erika Lang-Montgomery and her staff. The veteran head coach, while in her first season at Longwood, has brought in a hungry group to complement the seasoned veterans on the roster.

Returners include senior guard Anne-Hamilton LeRoy, just two seasons removed from being an All-Freshman selection in the league, along with guards Adriana Shipp-Davis, Milou Vennema and Jael Hall. In the post, junior forwards Brooke Anya, Geassy Germano and Hannah Osaro all return.

Among the newcomers, five of the six are transfers, and all six have gelled quickly with the team. Point guards Bailey Williams (James Madison) and Chardonnay Hartley will have plenty of options to choose from, as guards Janay Turner (Norfolk State) and Steph Davis (Holy Cross) and wings Daysha Reid (CCBC Essex) and Alyssa Chapman (Radford) flank them.

The Lancers open Big South play on Thursday, Dec. 29 with a trip to High Point, and they host Campbell on New Year’s Eve in a rematch of last season’s Big South Championship Game. The Lancers make the return trip to Campbell on Feb. 4.

Other highlights on the schedule include a pair of matchups with a USC Upstate side that finished third in the league. Longwood travels to USC Upstate on Jan. 14 before returning home to host the Spartans on Feb. 15.

In addition, Longwood hosts in-state rival Radford on Jan. 25 before facing the Highlanders on the road Feb. 18. The team’s final home game of the regular season is against Gardner-Webb on Feb. 22, and the Lancers close the regular season at UNC Asheville on Feb. 25.