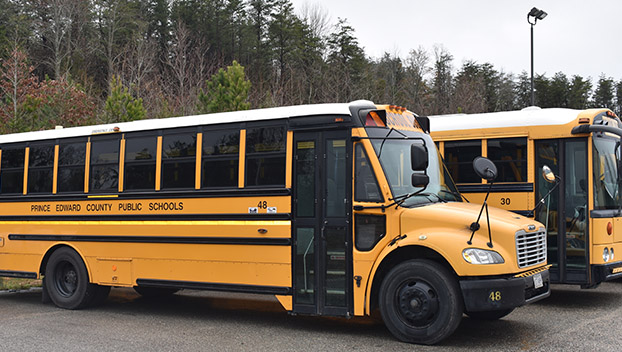 FARMVILLE – This year’s accreditation ratings were a mixed bag for schools in Prince Edward County. On the one hand, Prince Edward Elementary came in fully accredited with no conditions, meeting or exceeding state standards across the board. The news wasn’t as good for the middle and high school, with a couple glaring issues being highlighted in the data.

Now there are a few exceptions. Elementary schools, for example, aren’t judged on science pass rates because that test is first given in the fifth grade. And to give schools one more year to adjust post-pandemic, the state isn’t including chronic absenteeism in this year’s assessment.

When it comes to the middle and high school, the data showed, and district officials acknowledge, there’s still work to do in most of those categories.

A spotlight on Prince Edward Elementary

First, the good news. The data shows Prince Edward Elementary met or exceeded all of the state standards for English and math. The school also closed achievement gaps in both subjects, improving beyond state standards.

During their meeting on Wednesday, Sept. 7, Assistant Superintendent of Curriculum and Instruction Dr. Michelle Wallace, told the Prince Edward School Board these improvements were a reflection of work done over the last two years.

“(We worked on) getting our curriculum straight, getting literacy plans in place, getting math plans in place, (plus) the efforts of tutoring our children to get them over the hump of missing what they missed during the pandemic,” Wallace told the board.

The school’s improvements are particularly impressive in that it’s happening across the board. All student groups at Prince Edward Elementary are improving. The growth is happening on all grade levels as well.

This marks the first time since before 2018 that the elementary school exceeded state standards in English. And to be clear, it was a pretty significant jump. In 2018, 72% of students passed or showed significant improvement in English. That number fell to 64% in 2019, the last time the pass rates were recorded. This time around, 83% of Prince Edward Elementary students hit that mark, almost 10% higher than the state standard of 75%.

An estimated 88% of students at the school either passed both their math and science tests or showed significant improvement. This is the fourth straight year of growth in both areas and the third year of achievement above 80%.

“The elementary school is fully accredited and those students showed significant growth,” Johnson said. “This is particularly impressive given the challenges of the last year.”

Things were a bit different at Prince Edward County Middle School. Each school receives a “quality rating” of Level One, Two or Three when being considered for accreditation. Level One means you meet or exceed the state standards. Level Two means you’re showing improvement, but haven’t quite got there yet. Finally, Level Three means there are issues, as the school is performing below state standards.

The school also came in at a Level Three for achievement gaps in English and math, with the state saying students weren’t showing enough growth.

During the school board’s Sept. 7 meeting, Wallace said the middle school was bouncing back after a series of issues.

“(The) middle school had its own set of challenges last year,” Wallace told the board. “Particularly with staffing and some with discipline, which does impact achievement.”

She pointed out the school was understaffed in some critical areas last year. That’s improved this semester, with less than a dozen unfilled positions across the entire district. Also, despite the school not fully meeting state standards, Wallace pointed out that the scores are improving.

Speaking to The Herald, Johnson said she was pleased to see some progress, but more work was needed.

“Our middle school students made progress in mathematics and there is an intense focus on literacy and science this year,” Johnson said.

The news was better for Prince Edward High, where scores improved but fell just short of state standards. A total of 74% of students either passed their English test or showed significant improvement. That’s just 1% below the state standard of 75%. It was a similar story in math, where 63% of students either passed or showed significant improvement. That’s seven points off the state standard of 70%. It’s worth mentioning that those math scores showed the biggest jump at the school, going from 52% in 2018 and 2019 to 63% this year.

Johnson said at the high school, and every school, teachers were working to improve those scores.

“We are working in partnership with the state to implement hand-on strategies for students to increase the rigor and engagement in all of our classrooms,” she added.

A problem with absenteeism

And then there’s a looming problem. State officials didn’t count chronic absenteeism over the last two years, due to the pandemic. The same was true this year. But that doesn’t mean it’s not an issue here.

Both the middle and elementary school rated as a Level Two, improving but not quite at state standards. At Prince Edward Middle, 30.9% of students were chronically absent. For Prince Edward Elementary, that number was 27.5%.

The number at Prince Edward High, meanwhile, was significantly higher. During the 2021-22 school year, 47.74% of students were chronically absent at the high school. Wallace warned the board on Sept. 7 they can’t get the middle and high school accredited without conditions until this issue is fixed, as the state will start counting chronic absenteeism again in 2023. And it’s not something the schools can fix on their own.

“Our teachers are doing everything they can to get students to school,” Wallace told the board. “We’re calling them. We’re making home visits. We are going to the homes, we are knocking on the doors, we are giving them alarm clocks. We are picking them up if they let us know they need a ride if they miss the bus. (And we) do what we can to get the kids to school.”

Wallace said the district needs parents to make sure students get to school.

“We can do all the great things with student achievement, but if kids don’t come to school and our absenteeism doesn’t improve, our schools will continue to be accredited with conditions,” she told the board.

What she and other district officials are asking for is community support. They’re asking churches to encourage attendance, along with any employers some of the older high school students have. The same goes for coaches or even family friends.

Wallace said the district works with the local Department of Social Services on the issue as well. In Virginia, parents can lose their EBT card and other benefits if they don’t send their children to school.