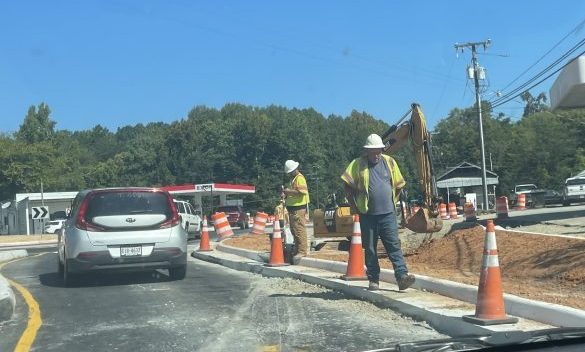 KINGSVILLE – The traffic backed up for nearly a mile. On Tuesday, Sept. 20, Prince Edward County residents took to social media, emailed The Herald and otherwise warned people not to use the Kingsville roundabout. Due to road construction, it was just taking too long to get through.

In their emails to The Herald, multiple residents questioned why this was going on. While each declined to go on the record, to a person they didn’t see the logic in tearing down a traffic light to install a roundabout, only to have a smaller traffic light set up, complete with flagman. A constant question we’ve heard this week is why didn’t the Virginia Department of Transportation (VDOT) just keep Route 15 open until the roundabout was completely finished?

The Herald staff heard similar complaints on Saturday, Sept. 17, when a perfect storm of sorts took place. In order to get to the Heart of Virginia Festival, Hampden-Sydney College’s home football game or Family Weekend at Longwood University, people had to go through that intersection of Routes 133 and 692. At times, there were bottlenecks and lengthy delays.

Before that, there was the issue at the end of August. A tractor trailer hauling an oversized double-wide was stuck in the center, unable to move. Thirty minutes later, the nearby construction crew was able to get the driver on his way, with cargo.

The reason for these shifts, VDOT officials said, is due to staged construction.

The idea is to keep a road open or open as soon as possible during construction. To this end, work crews will focus first on getting the basics finished. But that doesn’t mean the overall project is complete.

“Traffic shifting into the roundabout doesn’t mean the project is ‘done’,” said Len Stevens. He works as communications manager for VDOT’s Lynchburg district, of which Hampden Sydney is a part. “The contractor is now working to remove the old roadway where traffic was and will build the new roadway, curbing and shoulders.”

Stevens said this is basically standard practice for a VDOT project.

“This is typical when working in a way that keeps traffic going during a project,” Stevens said. “It’s called staged construction.”

And yes, that means putting up things like temporary traffic lights or using a flagman to move traffic through the construction zone. This is the part of construction where work crews move from area to area, finishing up masonry and a few aesthetics.

While that means delays now, it also signals the project’s end is nearly here. VDOT expects work to be finished over the next few weeks, with all construction equipment removed by mid-October.

Why a Kingsville roundabout?

And again, we have the question of why a roundabout is needed at that location.