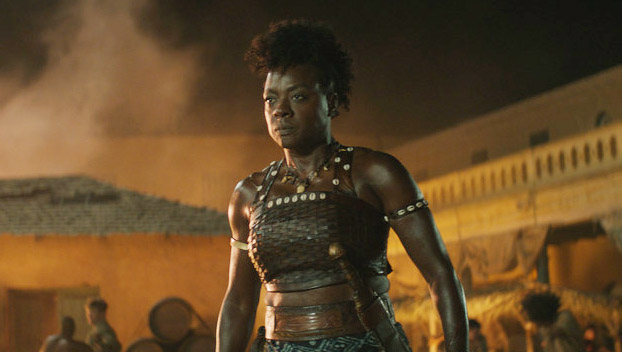 THE WOMAN KING, co-written and directed by Gina Prince-Bythewood (LOVE AND BASKETBALL) is set in the West African kingdom of Dahome in the 1820s. Although the Dahome are in a period of fragile peace with its stronger rival, the Mahi, tensions are high, especially when Dahome villages are continuing to be pillaged.

But the Dahome have something its rivals do not have, a group of fierce female warriors known as the Agojie who are charged with protecting their people. Led by General Nanisca (Viola Davis), the Agojie have a reputation for success and fearlessness, choosing to forego families and relationships with men to dedicate their lives to their community and sisterhood. And this reputation helps them recruit young women to join their ranks. However, the initiation process is not quick or easy, as 19-year-old Nawi (Thuso Mbedu) finds out the hard way.

Trusted by her king (John Boyega), Nanisca hopes to convince him to stop selling their people in the European and American slave trade and instead focus on agricultural projects like palm oil to fund their kingdom. But that suggestion proves even more difficult when Portuguese slave trader (Hero Fiennes Tiffin) and his associate (Jordan Bolger) prove pulling out of such a lucrative business is not only a financial risk, but a security risk as well. Now the Agojie are not only fighting rival forces, but are also fighting the status quo and trying to make their kingdom stand apart from the rest in Africa.

How did I feel about The Woman King?

This film emotionally affected me in more ways than I was expecting. It was warm in my theater, but I couldn’t even tell once the movie started due to the chills constantly radiating through my body. From the incredible fight scenes, to the emotional, intimate moments focusing on the close bonds between the characters, I was invested immediately. I am also proud that Hollywood funded a historical epic centered on a story of strong Black women and led by a predominantly all female cast.

Movies are at their best when they make you feel something, and I more or less had tears in my eyes the entire time. Happy moments? Tears. Kickass moments? Cheers and tears. Sad/touching moments? Sobs. A lot of my emotion came from thinking about how much this film, led by a diverse group of strong women who value sisterhood over all else, would have meant to me as a little girl. There were so few movies and TV shows for me that featured such a large female cast and female-driven story, and I love that young girls finally have something like this to appreciate; they can see fierce women on-screen and in turn learn about the Agojie’s incredible true story.

And that brings up another point I loved about the film, it is violent without being gory. Don’t get me wrong, there are a lot of fight scenes and a scene of sexual violence, but none of the scenes are graphic, which opens up the film to be enjoyed by younger audiences. With such epic action scenes, Prince-Bythewood could have easily made this film into a competition with GAME OF THRONES for bloodiest fights, but her restraint is what really stood out to me. And not only that, this film isn’t a humorless melodrama. It actually has some funny moments, especially from Lynch and when Davis’s character allows herself the occasional joke.

Like its tribe of female warriors, THE WOMAN KING is led by an incredible team of women, consisting of an almost all-female cast, as well as a female director (Prince-Bythewood), screenwriter (Dana Stevens), cinematographer (Polly Morgan), and numerous other behind the scenes crew members, which is still very rare in Hollywood. It is no surprise that Viola Davis, who also produced the film, is absolutely phenomenal in the role. It’s incredible how she can bring so many layers to a performance that on paper reads as a contradiction. She is able to effortlessly switch from a stoic, regal elegance to gritty, unpredictable emotionality that switches sometimes within the same scene.

But the real standout performance in the film for me was Lashana Lynch. I have been obsessed with Lashana since I first saw her in CAPTAIN MARVEL, and having gone back to watch her other roles, this is my favorite performance yet. She expertly balances playing a fierce warrior that demands respect, with a silly mentor who only wants the best for her sister warriors. Hers is the character I was most emotionally invested in the film and who I rooted for in every battle. I would love to see a prequel that shows how her character rose to her place of respect within the Dahome.

Full disclosure, I have been anxiously anticipating THE WOMAN KING since I saw the first trailer, which currently has over 10 million views and I am almost positive at least 5 million are mine. I am so happy to report that the film not only lived up to my enormous expectations, but exceeded them and made me excited for audiences to see and enjoy it. Make sure you stick around after the credits role because there is one final mid-credit scene to wrap up the story.