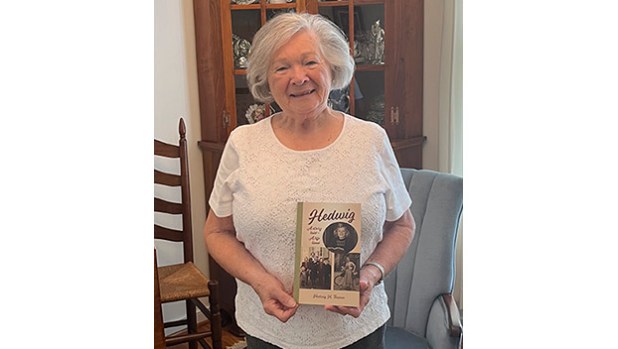 Heddy and her book at her home in Farmville. 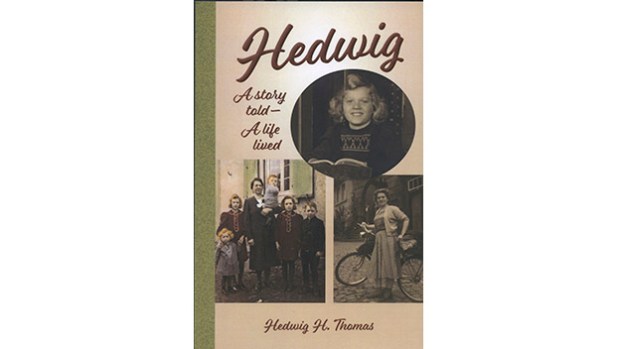 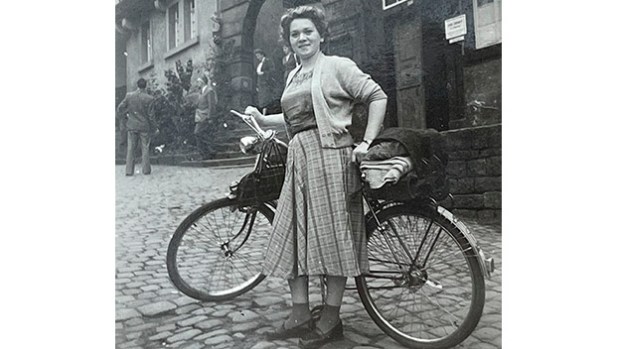 Heddy on a three-day cross country bicycle tour in 1953. 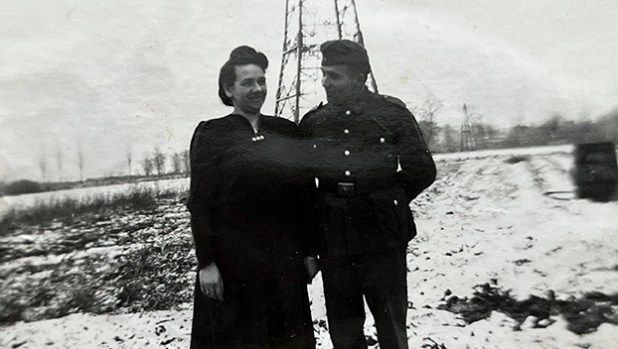 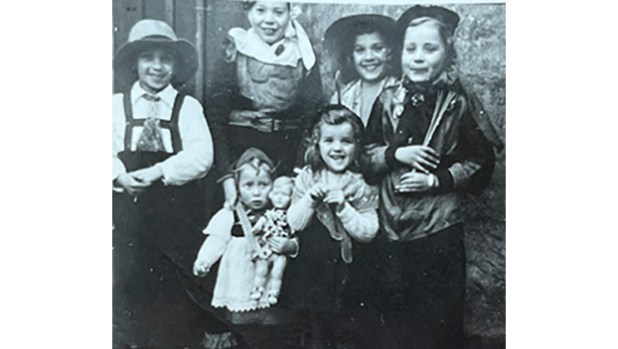 Heddy with her family as a young girl. 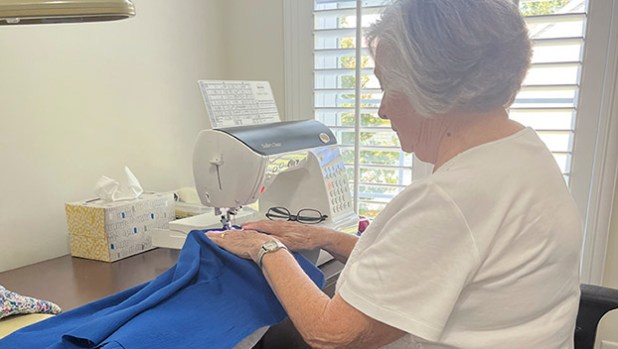 Heddy at her sewing desk. Sewing is one of her favorite hobbies.

“She has a knack for describing the opportunities and stresses that she has experienced in life with refreshing directness.”

This praise from Leonard Schulze is for Hedwig “Heddy” Thomas’ recently released autobiography, Hedwig: A Story Told–A Life Lived. Published in December 2021, Thomas’ book details the beginnings of her life and childhood in Hanau-Grossauheim, Germany to her immigration and assimilation in Southside Virginia.

Originally, Heddy had not considered writing down and publishing her life experiences; however, her husband, Herman Thomas, knew she would eventually compose her autobiography.

“I’d tell my husband and kids different stories along the way…Herman would write the headlines of the stories on a legal pad and hide the paper from me,” Heddy explains.

After a few years, Herman and her children urged her to write a book. Once she sat down to write, Herman revealed his secret scribbles to Heddy.

“Here he comes with this legal pad, and he says, ‘This might help you,’” she details. She is grateful for her husband’s secret writings and for her family encouraging her to compose her autobiography. “I’m glad I did it when I did because I don’t know if I would remember it all now,” she admits.

For the next decade, Heddy progressed through the writing and publishing processes. She decided to write her autobiography in two parts, but she almost did not write the second piece, which was the more painful of the two. However, her family, including her son Robert “Bob” Flippen, pushed Heddy to include these unpleasant experiences in her book. She recalls her son saying, “Those people are gone, and you are still standing,” encouraging her to record her stories. Thus, Heddy pursued her goal with her family’s aid. As she typed her autobiography, Herman often sat beside her with a Webster’s Dictionary, helping her find synonyms and phrases to accurately and vividly explain her experiences. As Heddy progressed with her book, she and her family read through the manuscript several times and edited any mistakes and grammatical errors. Then, Bob, who owns the Southside Virginia Historical Press Publication Company, published his mother’s book.

In her book, Heddy recounts her childhood in Hanau-Grossauheim, Germany that was filled with both unpleasant and enjoyable times. Following World War II, she remembers working on the black market selling stolen goods, including soap, to support her family. “We could barely eat, and we were so poor as children,” Heddy recalls. Despite the financial obstacles, she has fond memories of her childhood, including swimming in the Main River with her siblings and climbing onto the cargo barges that frequently traveled the river. She also remembers playing house, jump rope, and hopscotch with other children in her neighborhood.

One of Heddy’s most memorable experiences in childhood came when she was around twelve years old, when a traveling gypsy read her palm. The gypsy told Heddy she would live a long life and move far from home, along with marrying three times and having two children. “For a good Catholic girl to marry three times was simply out of the question, so we (Heddy’s mom and Heddy) laughed it off,” Heddy explains. Although they dismissed the seemingly meaningless reading, this prophecy did come true. “I still remember that moment as if it were today, seventy odd years later,” she states.

After growing up in Germany, Heddy immigrated to the United States in April 1960 with her first husband, an American soldier named Robert Flippen Jr. They settled in South Hill, where she slowly made new friends and worked at local businesses to help support her family.

While she grew accustomed to American living, Heddy missed her family and her life in Germany, especially Gemütlichkeit. This expression involves the joviality and comfort of being together in a group, especially in a restaurant or beer hall setting. For Heddy, Gemütlichkeit was often associated with her family. “We’d have afternoon coffee. It’s just the family sitting together for 30 minutes and enjoying each other’s company,” she explains.

As she settled into her new life in America, Heddy experienced uncharitable people. “I met those who made you feel like an outsider and made you still feel like the enemy,” she details. However, she encountered kindness more often than unfriendliness, including from her managers and neighbors. During her time working at a garment factory in La Crosse, the plant manager ensured Heddy maintained her job despite the company’s layoffs. “People gave us clothes for my son, Robert, and invited us over for meals,” Heddy remembers. She is grateful for these small yet meaningful acts of kindness by local individuals.

After spending almost six years in Mecklenburg County, Heddy and her family moved to Farmville in 1966, just a few years following the controversial school closings. As an immigrant to the area, she struggled to understand segregation. “I just looked at black people as people and not as lower-class citizens,” Heddy explains. Despite the town’s history and her painful experiences here, she emphasizes that the Farmville and Prince Edward communities are special to her. “Through all the obstacles in my past, Farmville has become home. I love it here,” she says.

After living in Virginia for over a decade, Heddy worked to become a U.S. citizen. She recalls her anxiety about the citizenship process, especially completing the amount of required paperwork and being questioned by a citizenship agent. Unsure of what the interview would entail, Heddy studied every aspect of the U.S. government and history she could. Luckily, the agent only asked her a few general questions and told her she’d be notified at a later date of her naturalization ceremony. “To this day, I wonder how did I undergo less scrutiny, my good looks perhaps,” she jokes. Regardless of the reason, she is proud of her American citizenship.

Today, Heddy maintains a quiet yet active lifestyle. She enjoys sewing and gardening, which she describes as her “outlets.” She is also involved in the United Methodist Church in Farmville and has served in different leadership capacities within the church. She also loves visiting friends and spending time with her family, including her two children who live nearby. Most of all, Heddy and her husband, Herman, enjoy sitting on their porch in the sunshine as they live out their senior years together.

Despite the numerous hardships she details in her book, Heddy ultimately wants her readers to draw a message of hope and happiness from her story. “I don’t want to muddle too much in the sadness; I want my readers to see how you rise above the obstacles and live a happy life,” she explains. She also wants readers to use her autobiography as inspiration to write down their own memories for their children and descendants.

If you wish to get a copy of Heddy’s book, Hedwig: A Story Told–A Life Lived, stop by Discount Fabrics in Downtown Farmville or Lib’s Place in Rice. You can also obtain a copy from Heddy herself by calling (434) 392-9497.