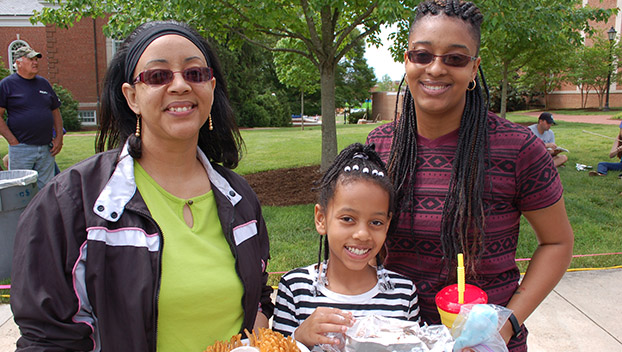 FARMVILLE – After nearly three years, the Heart of Virginia Festival returns to Farmville this weekend. Due to the COVID-19 pandemic, scheduled events in both of the last two years had to be put on hold and then canceled. After that brief pause, the event returns and expands to two days for its 42nd edition.

“We are so excited to welcome everyone back for the festival. We have worked really hard to make this year the best one yet,” said festival coordinator Susan Sullivan.

This year’s festival also marks a change in when the event is held. In the past, it’s served as almost a summer kickoff, taking place in early May. But it was moved to fall this year to try and include more parts of the community. Being held in May meant the semester had ended for most Longwood University and Hampden-Sydney College students. At that point, the majority had already packed up and headed home. By holding it in September, more college students can take part. Also, it’s Longwood’s Family Weekend, so parents and other family members can get involved as well.

And there’s plenty to get involved with.

“This year, we will be offering the annual festival 5k and 10k (races), as well as a craft show, children’s area, live music and a special post-event party,” Sullivan said. “Entry is free, however, event-goers are responsible (to pay for) their food, drink and vendor purchases.”

Heart of Virginia starts on Friday

Everything starts Friday night at 6 p.m., over at Riverside Park. The park, located at 517 N. Main St. in Farmville, will host the annual duck derby. Over the last month, people bought rubber ducks for a chance to win prizes of $1,000 for first place, $500 for second and $250 for third. When the clock strikes 6 p.m. on Friday, volunteers will drop the ducks, each numbered, into the Appomattox River. You can watch and cheer on your duck as they head down the river to the finish line. Winners will be announced live at the event.

Money raised from the duck purchases goes to help Piedmont Senior Resources (PSR) provide services and programming to aging adults in the area.

There will also be food trucks on hand, as well as live music from DJ Spake and Soul Expression. The groups will alternate, running from 5:30 to 8:30 p.m. 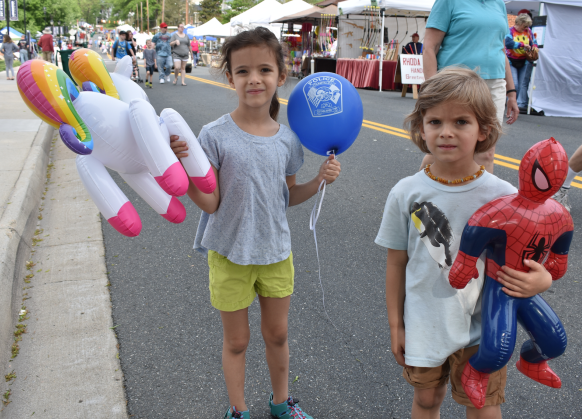 Sofie and Luke Lombana stand with balloons during the Heart of Virginia Festival
in May of 2018.

On Saturday, things will get started with the Heart of Virginia Festival 5K/10K race at 8:30 a.m. For runners, things begin at the High Bridge State Park Trail, located at 311 N. Main St. in Farmville. The course then takes them in the direction of the old Farmville train station.

But if you don’t want to start the day off with a run, just show up slightly later. The rest of the festival will open up at 9 a.m., at the intersection of Main Street and High Street. An estimated 40 people will be selling their homemade arts and crafts, with everything from candles to perfume, homemade soaps and some home decor.

Then there’s the part that started it all. In 1978, the Heart of Virginia Festival got started with an art show. The tradition continues this year, bringing artists from around the region to exhibit and sell their materials. The craft and art show this year will be on High Street, in front of Longwood University’s Rotunda. This is a juried competition, with artists competing in sculpture, woodworking, glass, watercolor, oil painting and several other categories.

There’s also events going on for children. At 9 a.m. and 11 a.m., there will be a music show. Then at 10 a.m., noon and 2 p.m., a magician will also perform. Volunteers from the Virginia Children’s Book Festival will also be on hand, holding storytime hourly on the half hour.

And of course, throughout the day, there will be a number of food options, ranging from barbeque to seafood, kettle corn, some international foods, pizza and desserts.

Are there any rules I should know beforehand?

There are a couple things to remember before heading out Saturday.

First, due to the Town of Farmville’s ordinances, no pets except service animals are permitted on festival grounds.

Second, even if it rains, the festival will take place. It will only be canceled in case of severe weather, such as a tornado.

Third, the festival is both wheelchair accessible and stroller friendly. The majority of the events will take place right on the street. However, there is a slight incline from Main Street to High Street.

Above all, just go and have fun. And if you’re not ready to call it quits after the festival ends, a free after-party will take place at the North Street Press Club, beginning at 5 p.m. That’s located at 127 North Street in Farmville.

Melisa Canizales wrote this for The Farmville Herald.