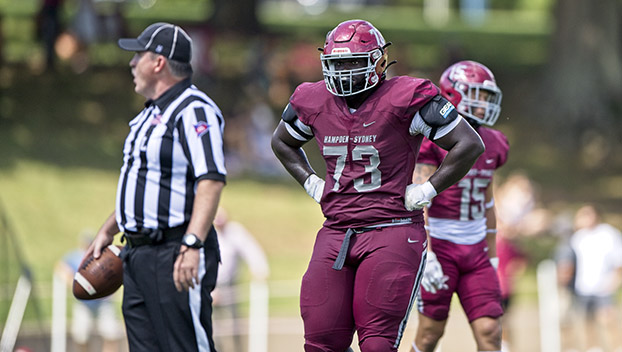 Hampden-Sydney defensive tackle Michael Harris reacts after a ref’s call in a game earlier this season. Harris has been selected as a semifinalist for the Campbell Trophy, a national award based on performance both on the field and in the classroom.

HAMPDEN-SYDNEY – One local football player is competing for a national award this season. Hampden-Sydney fifth-year defensive tackle Michael Harris has been named a semifinalist for the 2022 William V. Campbell Trophy.

Harris is one of 156 semifinalists from all divisions of the NCAA. He’s one of only two from the Old Dominion Athletic Conference and one of 29 from NCAA D-III.

What is the Campbell Trophy?

Celebrating its 33rd year, the Campbell Trophy is given to the best football scholar-athlete in the nation. It’s judged based on academic success, football performance and exemplary leadership. Harris is Hampden-Sydney’s third consecutive semifinalist, following Tyler Howerton in 2020 and Kaleb Smith last year. Howerton finished as one of 12 finalists for the award.

Harris is a Dean’s List student majoring in theater with a minor in music and has attained a 3.29 GPA. He is a recipient of the College’s Taylor Crowley Music Award, a Minority Student Union Member, Tenor Vocal Leader, Assistant Director for the Thesis Presentation: Inherit the Wind, an A cappella Group Member, as well as a Church Choir Member. Starting 20 of 24 career games, he entered his final season with 72 total career tackles, including 24 solo and 48 assists, six career tackles for loss and 0.5 career sacks. A three-time ODAC All-Academic Team honoree, Harris was a Second Team All-ODAC selection in 2021.

Harris is a team captain and has started each of the first three games this season with eight total tackles, including one solo and seven assists, along with 0.5 tackles for loss. In addition, he holds H-SC Football Weightlifting Records for bench (425), squat (675) and clean (355). Michael is the son of Michael Harris and Rabah Penn.

When will finalists be announced?

The NFF will announce 12-14 finalists on October 26, and each of them will receive an $18,000 postgraduate scholarship as a member of the 2022 NFF National Scholar-Athlete Class Presented by Fidelity Investments. The finalists will travel to Bellagio Resort & Casino in Las Vegas for the 64th NFF Annual Awards Dinner Presented by Las Vegas on Dec. 6, where their accomplishments will be highlighted in front of one of the most powerful audiences in all of sports. Live during the event, one member of the class will be declared as the winner of the 33rd Campbell Trophy and have his postgraduate scholarship increased to $25,000.