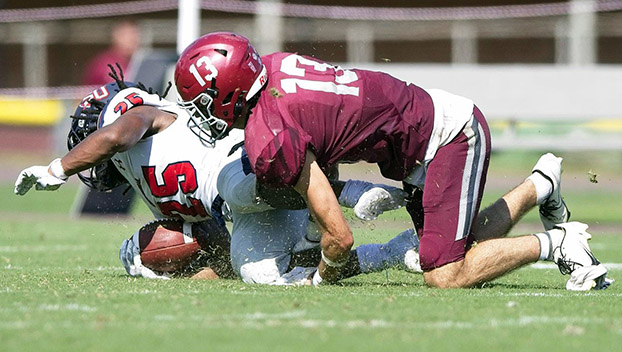 Hampden-Sydney Safety Will Pickren is in on tackle. (Photo by Steve Davies)

Editor’s note: This is the first of a two-part preview of Hampden-Sydney football. In this part we’ll focus on the offense. The second part highlights the defense and special teams, to see it click here.

HAMPDEN-SYDNEY – The 2021 season didn’t end how they hoped, with Randolph-Macon beating the Tigers 37-14 in the 126th edition of “The Game”. Still, their 5-5 overall record was a big jump from 2019, when Hampden-Sydney went 1-9 in their last full season before the pandemic. The Tigers hope to build on that growth as they prepare for kickoff this coming weekend.

Last year’s wins were well earned. Seven of the team’s nine NCAA opponents had winning records and D3football.com ranked the Tigers’ schedule as the fourth-most difficult among 239 Division III schools.

Hampden-Sydney football, by the numbers

Veteran 23rd-year head coach Marty Favret returns 67 lettermen among the 127-man roster this fall, including 11 starters, while the roster includes a record 60 newcomers to the program, as well. Coach Favret is the second-winningest football coach in school history with 140 victories (140-81), including 15 winning campaigns, while a five-time ODAC Coach of the Year. His program is 90-48 in ODAC games, while earning five ODAC Championships and making six Division III Football Championship appearances.

“These are exciting times for Tiger football,” said Favret. “We bring back a deep and talented group coupled with an excellent freshmen class. Expectations are and should be very high for this football team.”

Depth at the position is expected to come from junior Andrew Puccinelli of Glen Allen and freshman Carter Sido of Dallas, Texas. Puccinelli played in five games a year ago and completed 11-21 passes (52.4%) for 75 yards and one touchdown.

Junior Brice Wilson of Charlottesville and sophomore Austin Fernandez of Warrenton are also expected to open in starting roles at wide receiver and slot receiver, respectively, while seniors Talen Smith of Ruther Glen and Gage Bradley of Moseley, along with junior Jamahdia Whitby of Williamsburg will provide veteran depth. Wilson played in all 10 games and had one reception for three receiving yards and one touchdown. He has played in 14 career games.

Smith played in seven games and rushed for 25 yards on four carries, and had five receptions for 25 yards in the slot position. He has started one of 18 career games and has rushed for 31 career yards on nine career carries, adding seven career receptions for 41 career receiving yards. Fernandez and Bradley did not see action a year ago, while Whitby played in five games on special teams.

Freshmen Mason Cunningham of Arlington and Jordan Jackson of Fredericksburg could also play their way onto the field early this fall.

H-SC expects to be led by junior Melik Frost of Hardeeville, South Carolina, who was limited by injury to action in six games last season when he rushed for 101 yards on 30 carries, adding four receptions for 26 receiving yards. Frost has played in 11 career games and rushed for 316 career yards on 93 career carries with five career rushing touchdowns, and has five career receptions for 32 career receiving yards, along with two career two-point conversions.

Depth will come from junior Josh Jones of South Hill and senior Landon Porter of Virginia Beach. Jones started five of eight games and rushed for 200 yards on 54 carries with three rushing touchdowns, adding 18 receptions for 209 receiving yards and one touchdown. He has started five of 13 career games and rushed for 267 career yards on 73 career carries with four career rushing touchdowns, and has 19 career receptions for 215 career receiving yards and one career touchdown. Porter has moved from defense to offense for his final season; he earned All-State honors at running back as a high school senior in 2019, accounting for 1,450 all-purpose yards.

Freshman Markevus Graves-Franklin of Lynchburg could figure into the backfield mix, as well.

The tight end spot will be manned by senior David Byler of Virginia Beach, with depth from sophomore Sutton Lasso of Raleigh, North Carolina and senior Braxton Psuik of Glen Allen. Byler started two of 10 games a year ago with seven receptions for 86 yards and one touchdown, and he has 10 career receptions for 93 career receiving yards and one career receiving touchdown. Lasso played in two games on special teams, while Psuik played in six games with one reception for nine yards.

The Tigers have good experience and depth on their offensive line this fall, led by junior T.J. Minter of Chester, a First Team All-ODAC choice last fall, along with classmates Junior Barrera-Mondragon of Raleigh, North Carolina, John Mill of Chesterfield and Jason Southern of Reva, along with junior newcomer Berk Snow of Chesterfield. Minter, a first-year team captain, started all 10 games, while Barrera-Mondragon started two of six games, Mill started eight of nine games and Southern started all 10 games, as well. Snow is a transfer student-athlete from Bridgewater College, where he started nine games a year ago.

Depth comes from juniors Blake Barker of Cartersville, Dylan Huggins of Warrenton and Jack Reno of Clifton, as well as sophomores Logan Cohn of Henrico and Gabe Menjivar of Springfield. Barker played in four games last fall, Reno started one game and Cohn played in three games a year ago. Freshmen Oscar Servellon II of North Chesterfield and William Stimmel of Atlanta, Georgia could earn time on the line, as well.

Up Next for Hampden-Sydney football:

The regular season schedule for Hampden-Sydney football begins at Wabash College in a renewal of The Gentlemen’s Classic on Sept. 3 at 1 p.m. in Crawfordsville, Indiana.