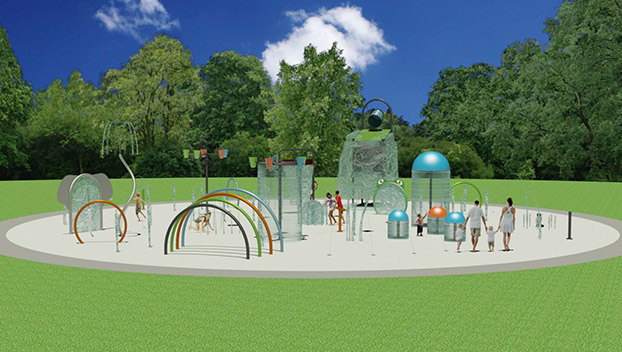 A look at the proposed Farmville splashpad, put together as a rendering that the council received in their meeting packets. Graphic courtesy of the Town of Farmville.

FARMVILLE – Should Farmville use federal funds to install a splashpad? That’s a question before the Farmville Town Council. The group held its work session Wednesday, Sept. 7, hearing from and asking questions of Town Manager Scott Davis.

“The plan is that we would put it on the same piece of property as the other playground at Lions Park, (but) closer to the trail,” Davis told council members.

Lions Park is located on West Third Street, at the entrance to the Wilck’s Lake island area. Based on the proposal and what Davis told the council, this splashpad would be approximately 5,000 square feet and come at a total cost of $638,806.38. Now that price includes equipment and full installation.

“This is a turnkey price,” Davis explained, adding that it includes all site prep costs. “(The company) would do all of the installation. They’ll put in a circulating system for the water.”

The splashpad would be paid for through the town’s American Rescue Plan Act (ARPA) funding.

Davis said previously, he and some members of the council visited a similar splashpad in Alta Vista, to get a visual of what this could look like. The one in Alta Vista is around 2,500 square feet.

“We had talked about (how) that was nice, but we wanted one a little bit larger,” Davis said.

The reason for a larger size, council members said, was a hope it would become an attraction. People from other counties would come to the splashpad. Council members also see this as a way of providing something for residents.

“This brings something into town,” said council member Brian Vincent. “(Something) that supplies a sort of recreational water-based activity that doesn’t require as much maintenance as a pool in the long term.”

There will be one cost coming in the future, Davis cautioned, if the council does sign off on the splashpad project. There will be a need for permanent restroom and changing area facilities. There’s not an immediate need for those things now, Davis said, but as the splashpad attracts interest, that will change. The cost for that portion, he added, would not be covered by federal funds.

“That will be an additional cost down the road,” Davis told council members.

When would it be finished?

As for a timeframe for how long construction would take, Davis said he couldn’t give a specific date right now.

“Not right now, until we can get into a contract with them, to see when that would be,” Davis said. He added that it also depends on weather conditions, such as how bad the winter is. “But we would hope (it’s finished) by summer,” he added.