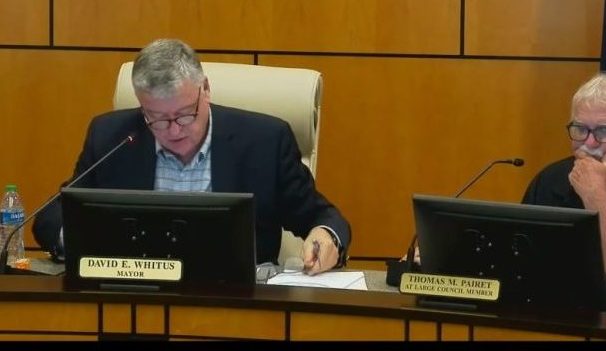 FARMVILLE – It was a short but eventful meeting Wednesday, as the Farmville town council tackled several projects. They took a vote on the proposed splashpad, held public hearings on the planned changes to the sign ordinance and discussed some possible road maintenance.

Before all of that, however, the group and guests in the audience were introduced to the town’s new fire chief.

Daniel Clark comes to Farmville from South Boston, where he served in the fire department for 16 years. Before working as captain, he served as a volunteer firefighter and has a bachelor’s of business administration degree from Averett University in Danville. While introducing Clark to the council, Town Manager Scott Davis said Clark would be taking the lead in a new project.

That means bringing on some paid staff, although there isn’t a timetable yet for that to happen.

Also, it looks like Farmville will be getting a splashpad in the near future. The town council voted unanimously to adopt the current proposal, which puts the project on the same piece of property as Lions Park, but closer to the trail.

Lions Park is located on West Third Street, at the entrance to the Wilck’s Lake island area. Based on the proposal, this splashpad would be approximately 5,000 square feet and come at a total cost of $638,806.38. That price includes equipment and full installation.

As part of their vote Wednesday, the town council agreed to cap spending for the project at a maximum of $650,000. That money won’t come from the town budget. Instead, it’ll be taken from Farmville’s American Rescue Plan Act (ARPA) funding.

While there is no definite timeline in place, Davis told the council in the previous meeting he hopes to have the splashpad operational by next summer.

You can read more about the project here.

In the next few weeks, you’ll start to see paving work happening at one of the town parking lots. Currently, the town lot on South Main Street, in front of the Mary E. Branch building and Elk’s Lodge, is only partially paved.

At their August meeting, the town council voted to use ARPA funds to cover the $22,250 needed to pave the lot. Now that project is moving forward.

“We’re just waiting on the paver to give us a date,” Davis said.

More staff and a couple visitors

We have a couple other notes from Wednesday’s meeting.

Farmville has a new human resources (HR) manager, Chris McAllister. Davis introduced the Longwood University graduate to the council at the beginning of their meeting.

McAllister comes to Farmville from the Town of Crewe, where she served as finance director and treasurer. Before that, she worked as a human resources generalist for Call Federal Credit Union. She holds a bachelor’s of science degree from Longwood.

And finally, class was in session during Wednesday’s meeting, as the council welcomed Dr. Eric Hodge’s American Government class from Longwood. The group was there to study local government and Mayor Whitus joked that they picked a good day to do it, as it was a quick meeting.