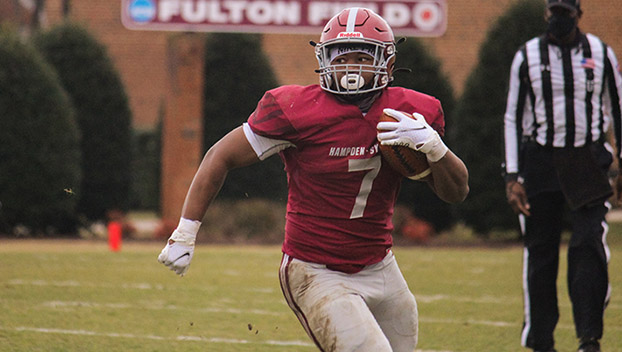 Editor’s note: This is the second of a two-part preview of Hampden-Sydney’s 2022 football team. This part will focus on the defense and special teams. For a breakdown of the offense, click here.

HAMPDEN-SYDNEY – On a team featuring 60 newcomers, you need some experience. For Hampden-Sydney, a good portion of that comes on the defense.

H-SC has the most experience and depth on the defensive side of the ball in the secondary, and it begins with junior safety Will Pickren of Mount Pleasant, South Carolina, a First Team All-ODAC selection as well as the 2021 Touchdown Club of Richmond State Small College Defensive Back of the Year and a Third TeamD3football.com All-Region 3 selection. He started nine of 10 games last year and had 106 total tackles, second on team, including 54 solo and 52 assists, 5.5 tackles for loss, two interceptions, and six pass breakups. Pickren tied for second in the ODAC in pass breakups, while fourth in total tackles, tackles per game (10.6) and solo tackles, fifth in assisted tackles, and tied for eighth in interceptions.

Expected to join Pickren in the starting lineup initially are fifth-year Jordan Fields of Chapel Hill, North Carolina, juniors Tobias Lafayette of Charleston, South Carolina and James-Ryan Salvi of Troutville, along with sophomore Joseph Pierre of Mobile, Alabama. Fields, a first-year team captain, was limited by injury to four starts last fall and had 15 total tackles, including five solo and 10 assists, one tackle for loss and three pass breakups. He has started 14 of 19 career games with 55 total career tackles, including 26 solo and 29 assists, one career tackle for loss, two career interceptions, three career pass breakups and one career PAT/interception return for two points.

He has started 10 of 14 career games with 77 total career tackles, including 35 solo and 42 assists, five career tackles for loss, two career interceptions, one career pass breakup, one career forced fumble and one career fumble recovery. Pierre started three of seven games and had 26 total tackles, including 16 solo and 10 assists, 5.5 tackles for loss, 2.5 sacks, four pass breakups and one forced fumble.

Depth in the secondary will come from seniors Jabril Lewis of Virginia Beach) and Will Shulleeta of Henrico, junior Ricky Walker of Chesapeake, sophomore Kyle Lafayette of Charleston, South Carolina and freshman Max Pickren of Mount Pleasant, South Carolina. Lewis started four of eight games last season and had 28 total tackles, including 13 solo and 15 assists, one tackle for loss, one interception and two pass breakups. He has started 12 of 23 career games with 59 total career tackles, including 31 solo and 28 assists, 2.5 career tackles for loss, one career interception, six career pass breakups and one career blocked kick. Shulleeta started one of five games and had 10 total tackles, including seven solo and three assists.

He has started five of 17 career games with 35 total career tackles, including 21 solo and 14 assists, 0.5 career tackles for loss, one career interception and one career blocked kick (punt). Walker played in five games and had four total tackles, including two solo and two assists. Kyle Lafayette and Max Pickren are the younger brothers of Tobias and Will, respectively, with Kyle seeing action in six games on special teams a year ago.

The defensive line will be anchored by a pair of returning starters in fifth-year Michael Harris of St. Stephens Church and junior Kevin Gholson of Montpelier, along with sophomore Peyton Howard of Pickens, South Carolina. A Second Team All-ODAC selection, Harris, a first-year team captain, started all 10 games last year and had 29 total tackles, including four solo and 25 assists, and 1.5 tackles for loss. He has started 20 of 24 career games with 72 total career tackles, including 24 solo and 48 assists, six career tackles for loss and 0.5 career sacks.

Early-season depth is expected from juniors T.J. Gates of Powhatan and David Haley of Norfolk, and sophomore Jordan Akerson of Roanoke. Gates played in all 10 games and had eight total tackles, including two solo and six assists. Haley is making the move over from the offensive side of the ball, where he started five of seven games last fall. Akerson played in six games and had four total tackles, including one solo and three assists, two tackles for loss and career sack.

Senior placekicker Jack Breedlove of Atlanta, Georgia and junior punter George Langhammer of Roanoke return to handle the two duties, respectively. Breedlove played in seven games as a junior and was 10-10 on PATs (100%), and 3-5 on field goals (60%) with a career long of 39 yards. He has played in 12 career games and is 23-25 on career PATs (92%), and 3-6 on career field goals (50%) with the career long of 39 yards.

Freshman McRae Ball of Alpharetta, Georgia will handle kickoff duties this fall, and will also serve as the backup placekicker and punter to begin the season.

Coach Favret, the longest-tenured collegiate head coach in Virginia, is closing in on the most football coaching wins at the College, as his 140 wins on the gridiron are second only to the legendary Hall of Fame head coach J. Stokeley Fulton, who led H-SC for 25 seasons (1960-84) and compiled an overall record of 143-99-5 with nine conference championships and three post-season appearances.

Veteran college football coach Tom Clark is in his first season on The Hill, after previously serving as the defensive coordinator at NCAA Division I Football Championship Subdivision (FCS) member VMI since 2015. Clark, who will oversee the defense, was also the head coach at Catholic (DC) University for nine seasons (1994-2000, 2004-05), including 1999 when Catholic won the ODAC Championship and Clark was named the ODAC Coach of the Year. Coach Favret served as the offensive coordinator and assistant head coach at Catholic for six of those seasons before being named H-SC’s head coach on December 30, 1999.

There’s a quiet confidence within the program for 2022 as the Tigers are anxious to get the season started. The 10-game regular season schedule begins at Wabash College in a renewal of The Gentlemen’s Classic on Sept. 3 at 1 p.m. in Crawfordsville, Indiana. H-SC will play its home opener against Widener (PA) University on Sept. 10 at 1 p.m. on Fulton Field at Lewis C. Everett Stadium. The slate includes seven ODAC games — culminating with the 127th Edition of “The Game” against archrival Randolph-Macon College on Nov. 12 at 1 p.m. at Everett Stadium.