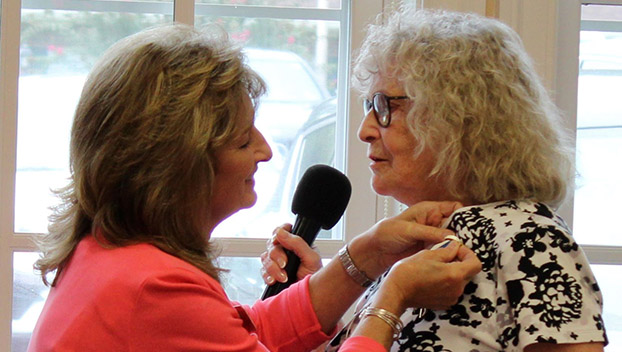 The members of the Judith Randolph-Longwood Chapter, Daughters of the American Revolution, gathered on Saturday, Sept. 10, at The Woodlands Community Center to celebrate the opening of their 2022-23 season. The new Regent, Margaret Atkins, led the opening ritual, followed by approval of the minutes of May 10 and the updated treasurer’s report.

Registrar Vicki Morris introduced a fascinating crossword puzzle game tailor made to test history knowledge, particularly information about the United States Constitution. Each member was given a blank crossword puzzle and a sheet of clues to work on during the delicious luncheon that followed. The exercise was thoroughly enjoyable, both as a test of remembered information as well as a source of knowledge never learned.

After a satisfying meal of salad, pasta, chicken, fruit skewers, butter and rolls, and topped off with the ever popular “Judith Randolph cake,” Regent Atkins introduced the chairs of various committees who gave interesting informational reports. Of most immediate concern was the report of Rebecca Maxwell, the chair of the Day of Service Committee. DAR chapters across the nation participate in projects to support their local communities on October 11, in remembrance of the day in 1890 when DAR was first established. Rebecca outlined the committee’s plans for the upcoming day of service for this year, and requested chapter support. Sarah Stokes and Myra Green also serve on this important committee.

Nancy Pempel, representing the Wreaths Across America (WAA) Committee, outlined the progress WAA has already made in preparation for the wreath laying to be held this December for veterans interred at Trinity Memorial Gardens. Cards to order wreaths for this ceremony were distributed, and, as with the Day of Service and Service for Veterans committees, member support was urged.

A FIRST FOR NEW OFFICERS

Past Regent Carolyn Wells announced that she has agreed to assume responsibility for the chapter newsletter, with the first issue scheduled to appear October 1. Chapter members will be given an opportunity in the near future to participate in the selection of a name for this year’s newsletter.

The beautiful centerpieces adorning each table were the “door prizes” for this meeting, each going to lucky members whose names were drawn from a hat. The centerpieces were created by Helen Smith, one of the chapter’s new members.