A day in the life of UPS Delivery Driver Doug Seagle 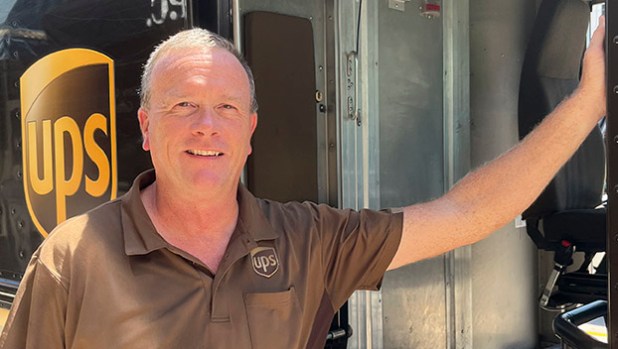 Doug Seagle has been a driver for UPS for 33 years and has had his current route in Farmville for five years. 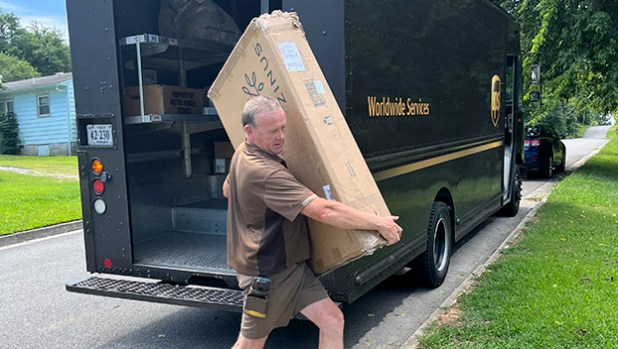 Seagle delivers a large box to a private residence. 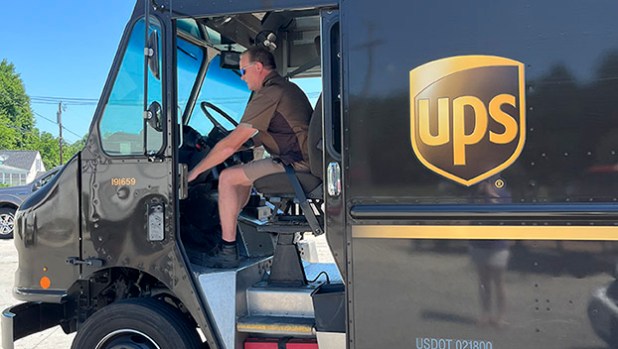 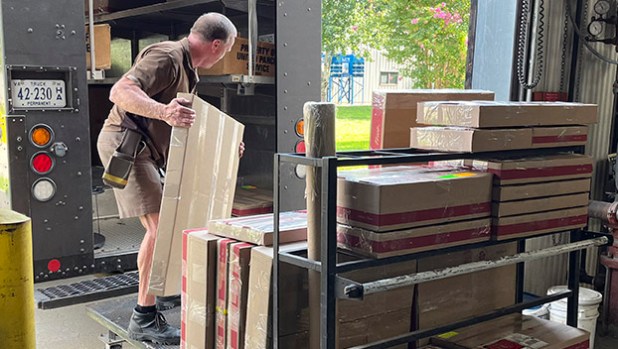 Seagle is picking up packages at Gemini, Inc. 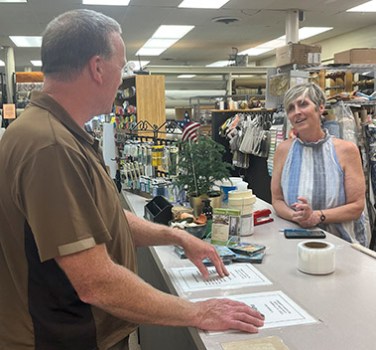 Seagle is seen speaking with Heather Shorter at Discount Fabrics on Main Street during a stop. 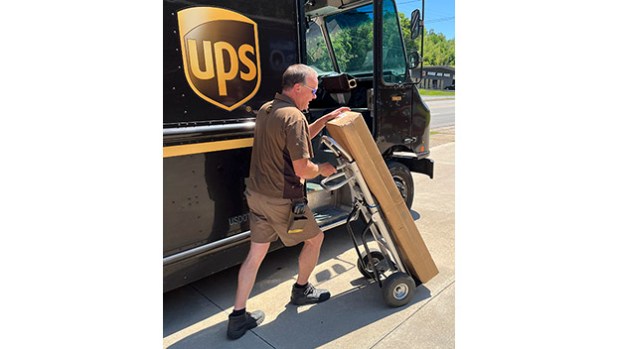 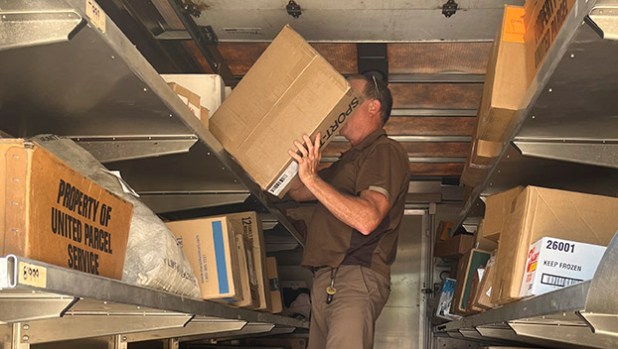 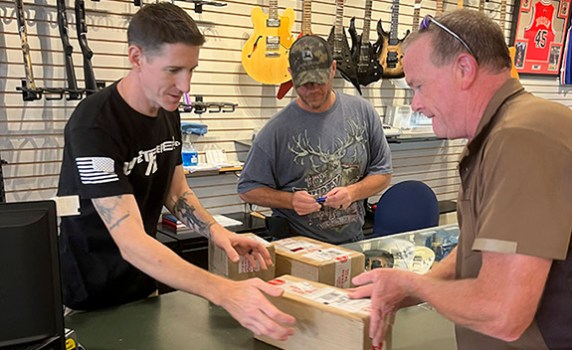 Delivering to Kevin Clement, left and Eugene Boyles at The Attic Pawn Shop on Main Street.

Story and photos by Ireland Seagle

Personable. Hardworking. Reliable. These are some of the words people around Farmville use to describe United Parcel Service (UPS) Delivery Driver Doug Seagle. Seagle, who’s worked at UPS for 33 years, is one of three drivers who regularly delivers to Farmville. He has been on his current route for the past five years. No two days are alike for him as the number of delivery stops varies with the amount of packages on his truck.

Seagle’s run is based out of the Keysville UPS Customer and Distribution Center, which opened in 1988. Due to Keysville’s central location along Highway 360 and to other towns in Southside Virginia, UPS decided to construct the facility in this town. When the center opened, the building had 18 routes, also known as “runs,” to be covered by 18 drivers. In just three decades, that number of runs has nearly doubled, with the Keysville facility now operating 33 to 35 routes daily. This increase in routes was necessary due to the higher volume of packages encountered at the facility. In turn, this increased volume of items has been generated by population growth and the magnitude of online ordering, generated by the COVID-19 pandemic.

After leaving the UPS Distribution Center in Keysville, Seagle arrives in downtown Farmville around mid-morning. He starts the day by delivering to several businesses on South Main Street. He then moves to East Third Street to distribute packages to numerous organizations, including Rockwell Audio. Even though Seagle briefly stays at each delivery stop, “he always takes the time to see how you are and talk to you,” Manager Otis Ranson says. “You can tell he’s in a rush, but he’ll always stop and chat.”

Once he delivers to East Third Street, Seagle proceeds to North Main Street in the heart of downtown Farmville. He visits multiple businesses, such as Key Office Supply.

“Doug sometimes brings 10-15 packages, and other times he has a full load,” Office Manager Sandy Layne explains. Even when he’s in a hurry, he aims to empathize with the customers he meets. “He tries to find common ground with everyone and tries to relate to everyone,” Layne continues. During his stops, Seagle delivers packages ranging in weight(s) from 5-pound envelopes to 70-pound boxes.

Following his deliveries on Main Street, Seagle moves to deliver to businesses and private residences across the Appomattox River. Then, he works to finish his stops on East Third Street. He delivers to Taylor-Forbes Equipment Company, where he brings a range of packages depending on the day. “Somedays (Seagle) delivers over 30 boxes, other days it’s just five or six,” Part Owner and Sales Team Lead Nat Carter states. The weight of each package delivered to Taylor-Forbes also varies by the day. Sometimes Seagle carries small, 10-pound. packages, and other times he moves 80 to 100-pound. boxes.

After his stop at Taylor-Forbes, Seagle proceeds farther down East Third Street, ending at Ridge Animal Hospital. Although he has hundreds of packages to deliver each day, Seagle makes sure the customers at each stop feel noticed. As Hospital Manager Sydney French details, “Doug has always been incredibly friendly and polite, taking the time every day to smile and say hello. It feels like he’s a part of our extended work family.”

Once he completes most of his deliveries, Seagle stops for lunch. He parks the truck under a shade tree since the vehicle does not have air conditioning. If the weather is extremely hot and humid, he sometimes eats indoors at a local restaurant. Seagle’s lunch break also allows him to take a respite from the hustle and bustle of the delivery route. Over the past few months, he has delivered everything from clothes and shoes to treadmills and reels of hydraulic hose that weigh between 80 and 140 pounds a piece.

After he eats a late lunch, Seagle then delivers to the Sunchase Apartments and starts his pickups, which are goods or products that the general public orders from a local business that need to be shipped out, whether it be in Virginia or across the country. He then moves to side streets near Sunchase, both delivering packages to private residences and picking up items along the way. When he finishes all his deliveries and pickups for the day, Seagle drives back to the UPS Customer and Distribution Center in Keysville.

At the end of an average day, Seagle has delivered between 250 and 300 packages and has picked up roughly 180 to 220 items. “I usually touch between 400 and 500 packages a day,” he explains. Along with the large number of packages, he also gets plenty of steps each day by walking an average of 6 or 7 miles while at work. By the end of the day, he has driven between 68 and 73 miles a day, with a good chunk of that commuting from Keysville and back.

Although his job entails lifting heavy packages and lengthy working hours, Seagle wouldn’t change careers. “I had originally wanted to be an accountant because I liked numbers. I started working at UPS part-time in college, and now I couldn’t sit in an office. I enjoy being outdoors–despite the hot, humid and cold, rainy days,” he states. He also likes interacting with the customers on his route and sharing stories with them. “You get to know everyone and see their children grow up. They’re all good people,” Seagle continues.

With Seagle planning to retire in the next few years, he wants to give advice for people aspiring to be a UPS Delivery Driver. “Being a delivery driver is more than just hopping in the truck and dropping off boxes. UPS wants all packages delivered and picked up, but their first priority is safety: driving safely, working and lifting packages safely, etc. It becomes second nature,” he explains.

Along with prioritizing safety, Seagle emphasizes that a UPS delivery driver must endure all kinds of weather and physical conditions while on the job. “It’s hard work, and there’s long hours, especially during the holidays. You’ll be outside, whether it’s 28 degrees and snowing, or 98 degrees and humid. Be prepared to sweat a lot,” he jokes.