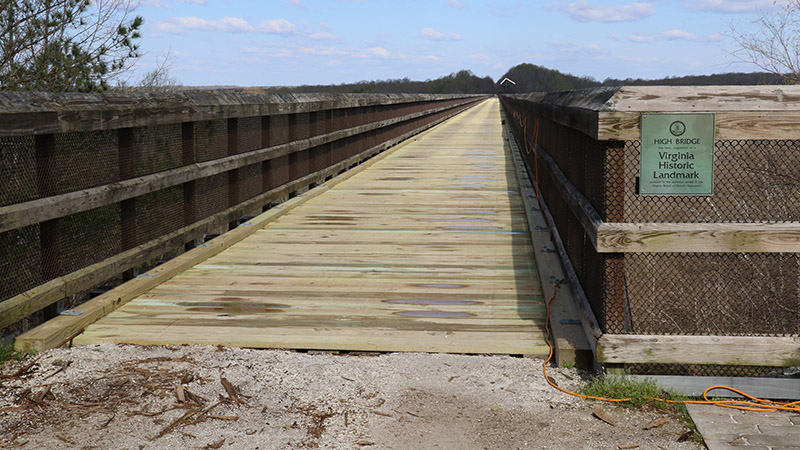 The High Bridge looks refreshed with the new decking applied.

FARMVILLE — At first, they focused on Sailor’s Creek. Then they suggested people take a trip to High Bridge. Within a few minutes, staff from the World Atlas had explained why Farmville and its surrounding area was one of the best spots in Virginia to take a day trip.

Farmville got some global recognition over the last week, thanks to the World Atlas reference. And yes, this is the same World Atlas that many people reading this have used at some point in their lives. The group listed Farmville as one of the “7 Prettiest Small Towns in Virginia For a Weekend Escape.”

“Visitors can get a real sense of history here in a laid-back and charming small-town atmosphere,” the Atlas staff wrote. “The town of Farmville is a great spot for a day trip or two.”

But what specific spots did they highlight? And how could the area use this as a focus for the future? Let’s take a look.

Farmville history and the outdoors

Farmville’s outdoor recreation drew the most attention from the World Atlas staff.

“Families can enjoy camping, fishing, hiking, cycling, and picnicking at any of the beautiful parks and green spaces in town,” they state.

In addition to Riverside Park and the Farmville Blueway, the group put the spotlight on Sailor’s Creek and High Bridge State Park. The High Bridge Trail is 31 miles, the longest recreational bridge in Virginia and one of the longest in the United States. It stands 125 feet above the Appomattox River and stretches more than 2,400 feet long. A former rail bed for the South Side Railroad and eventually the Norfolk Southern Railway system, it dates back before the Civil War.

High Bridge was built in 1853, designed to help trains from the South Side Railroad cross the Appomattox.

That history earned it a spot as a Virginia Historic Landmark, as well as on the National Register of Historic Places. Now it’s a nature trail, giving people a chance to hike and sightsee.

The Atlas staff also encouraged people to come anytime from May to September, to take advantage of the First Friday fair.

Local tourism and business officials said they were happy to see Farmville get recognition, but not surprised.

“Small town charm, natural beauty, dining, boutique shopping, and history, Farmville is a beautiful place with something for everyone,” said Farmville Area Chamber of Commerce executive director Anne Tyler Paulek. “We are a wonderful place to live and do business, a fantastic community in which to raise a family, and the perfect destination for a weekend getaway.”

For a look at local events around the area, click here.