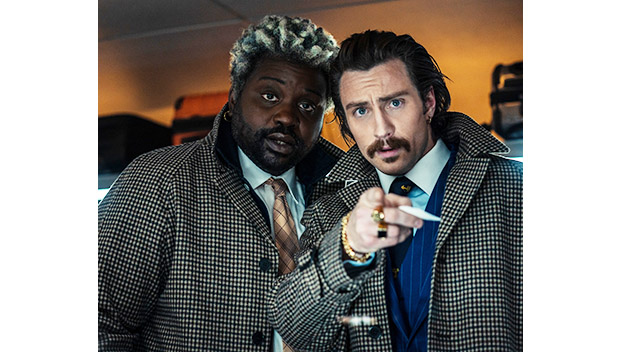 BULLET TRAIN, directed by David Leitch, is an entertaining enough ensemble action comedy. Part KILL BILL, part MURDER ON THE ORIENT EXPRESS, the film has high octane fight scenes that are insanely gory, while also being well-choreographed and pretty darn awesome. The film’s plot is admittedly bloated, with multiple chaotic storylines that converge and diverge as it evolves, making the action at times a bit more taxing to keep track of than you would expect from a summer blockbuster. And I wish writer Zak Olkewicz had cut down on the “funny” dialogue, particularly with Brad Pitt’s character; instead of it being humorous, it felt forced. Still, I was entertained throughout the film’s two hour runtime, especially thanks to Aaron Taylor-Johnson and Brian Tyree Henry.

Based on a novel by Kotaro Isaka, BULLET TRAIN follows Ladybug (Pitt), an assassin who is known to have bad luck, but still manages to get out of some serious scrapes. When handler (Sandra Bullock) chooses him to fill in for a colleague on a sensitive mission, Ladybug agrees and sets out to acquire a special briefcase while riding the Japanese bullet train from Tokyo to Kyoto. But little does he know, making it off the train with the briefcase is going to be a lot harder than expected, especially after he realizes he isn’t the only gun-toting assassin onboard, and some of his enemies may be harder to distinguish than others.

I know Brad Pitt is getting all of the publicity for this film, but he isn’t my favorite character in the movie by any stretch of the imagination. His character’s attempts at humor through a zen-like outlook on life, which is in direct contrast to his profession, gets really stale after awhile. It quickly became clear that Aaron Taylor-Johnson and Brian Tyree Henry are the real stars of the film. Their dialogue doesn’t seem forced, and they are the most fleshed out, multi-layered characters in the entire film. I would love to see a prequel following their characters’ antics all over the world. And ever since I walked out of the theater, I have been wondering which Thomas the Tank Engine character I would be. I hope I’m not a Diesel.

The rest of the characters in the movie are pretty expendable and don’t stand out nearly as much as Taylor-Johnson and Henry. Not that the movie needs any more characters, but I wish there were more females. While Joey King does have a meaty role, both Zazie Beetz and Sandra Bullock are relegated to about 3-4 minutes of screen time at best (not including Bullock’s voice performance).

And just when you think the film can’t get any more over the top, enter the third act. The final set pieces get to be so big and over the top, with nothing but CGI and explosions, the film started to lose its hold over me. And don’t even get me started on the random snake plotline that was a total waste of time and was probably only included for the gnarly death scenes it created.

In addition to some pretty awesome action scenes, BULLET TRAIN has a great soundtrack, which makes it perfect for a Dolby or IMAX movie theater experience. Just make sure you put on your thinking caps before you come to the theater so you can try to keep up with the more convoluted elements. And make sure you stick around for an end credit scene that begins pretty shortly after the credits start, tying up a loose end on the fate of one of the train’s passengers.