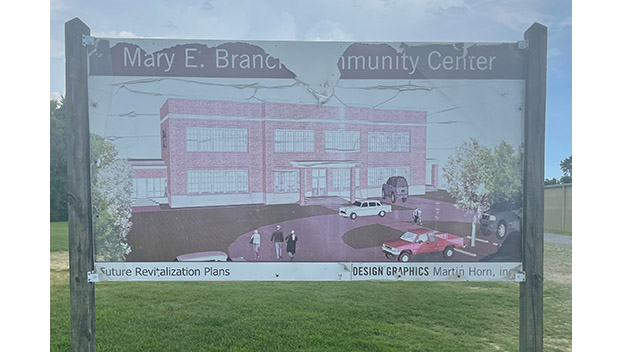 As you’re driving past Longwood University’s baseball stadium, there’s a building on the right side of the road that may now look empty. But it’s filled with history and its doors may soon reopen as the Mary Branch Community Center.

According to the Civil Rights Walking Tour of Farmville, the building at 632 S. Main St. was constructed in 1926 as the Farmville Colored School. It was renamed Robert Russa Moton High School in 1931 and then became the Mary E. Branch School in 1939.

To preserve the building’s history and serve the community, the process of renovating the building is underway with hopes of  transforming it into the Mary E. Branch Community Center.

According to Cornell Walker, vice president of the community center, there was an attempt to start renovations before the pandemic but it got delayed. As the renovation process restarts again, the next step is financially assessing the cost of the renovations, which is expected in the next month.

“We’ve only been in this a couple of months and we are making good progress,” said Walker. “The town and the county are working with us to get what we need.”

Who was Mary Branch?

There’s a story even in the school’s name. Mary E. Branch was born in Farmville in 1881 to Tazwell and Harriett Branch, both former slaves. Her father Tazwell served on the Farmville Town Council and was eventually elected to two terms in the Virginia House of Delegates.

Mary meanwhile got involved in education. After graduation, she became an elementary school teacher in Blackstone, specializing in English. She later joined the staff at Virginia State College, teaching there for 20 years.

Mary wanted to improve her own education, as well. She earned a bachelor’s degree from the University of Chicago in 1922 and a master’s in English from the same school in 1925. In 1928, she became the dean of women at Vashon High School in St. Louis, Missouri.

Mary has a place in history, however, for what she did after that. In 1930, the American Missionary Association came to her with a request. They wanted her to become president of Tillotson College — a college that was struggling in 1930, according to the Mary Branch papers at what is now Tillotson University.

“It had seen declining enrollment, and the United States Department of Education, because of its findings from a survey of all the African American colleges in America, was suggesting the school be closed,” a summary of Branch papers states. “It was into this moment that Dr. Branch stepped in and raised the school to heights it had never seen before.”

Why was Mary’s appointment important? She was the first African American female college president, serving 14 years at the school. Beyond this milestone, she also transformed the school. She had the first library built at the college and made more resources available for students, the papers say. Her work led the way for the two-year college to eventually become a four-year university.

A look at the exterior of the Mary Branch Community Center, as of Aug. 4 2022. (Photo by Brian Carlton)

Now knowing a bit about Mary Branch, here’s what’s happening with the building that bears her name. At the July 13 Farmville Town Council meeting, the council adopted a resolution to apply for the Industrial Revitalization Fund Grant through the Virginia Department of Housing and Community Development to help cover some of the renovation costs.

The Prince Edward County Board of Supervisors voted at its July 19 meeting to partner with the Town of Farmville in helping fund the project. The board agreed that the county will provide 50% funding, or $11,303, for the proposed facility assessment.

Once renovations are done, the community center hopes to have youth and adult programs. The goal is to have classrooms available for programs and to rent out, meeting rooms for businesses, an auditorium for weddings and events, a kitchen for culinary classes, computer classes, drug intervention and possibly some mental health resources.

According to Walker, this project is large and needs the community’s help. The center is planning fundraising events to give Farmville residents a chance to help make the project a reality. Residents can stay up to date by visiting the Mary E. Branch Community Center’s Facebook page. Those interested in joining the committee can contact Walker at 434-392-4888.