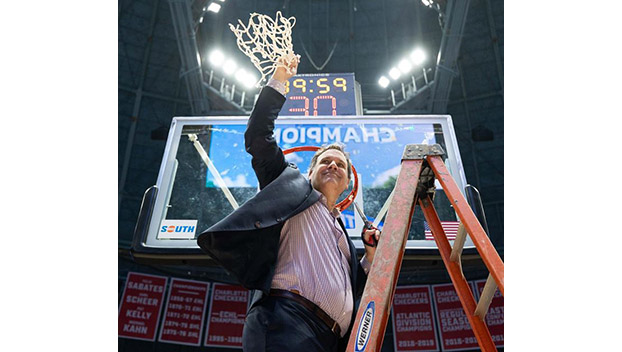 Longwood University Men’s Basketball Head Coach Griff Aldrich holds up the net after cutting it down to commemorate his team’s first-ever Big South Tournament championship and inaugural ticket to the NCAA Division I Tournament. (Photo by Mike Kropf)

FARMVILLE – Off a historic season, Longwood men’s basketball coach Griff Aldrich announced the addition of three new staff members to round out his staff heading into the 2022-23 season.

“Identifying and attracting outstanding staff members has been a key element to building the program at Longwood,” Aldrich said. “We have been fortunate to have outstanding men and coaches during my tenure – and I am thrilled that we have again been able to recruit both high-character men and coaches to lead our team this year. The addition of Quinn, Graham and Brian will significantly and positively impact our players and our community, and I am really excited to have them join the program at this special time.”

McDowell comes to Longwood from following three seasons as an assistant at Lehigh University, and he brings a decade of experience as both a coach and professional player with him.

“Quinn is not only a tremendous coach but an outstanding man,” Aldrich said. “His approach to coaching and reasons for doing so really stood out to me during the search process. Pursuing his profession as a calling for a greater purpose, Quinn really has emphasized pouring into his players both as athletes and young men. I know he and his wife, Lindsay, and children will be a great addition to the Longwood community.”

Seven players he coached earned all-conference honors during his three seasons at Lehigh, including four this past spring. Nic Lynch and Evan Taylor were both named third team All-League, and Keith Higgins Jr. and Tyler Whitney-Sidney earned All-Rookie honors.

Prior to Lehigh, McDowell was an assistant at Taylor University after beginning his coaching career at Virginia Wesleyan University in the Division III ranks.

As a player, McDowell was one of four players in William & Mary history to record at least 1,600 points and 500 rebounds, and he set program records for both games played and minutes played in a career. He was a three-time CAA All-Academic selection, and he was named one of 10 finalists for the prestigious Senior CLASS Award, becoming the first CAA men’s basketball finalist for the award.

Following his collegiate career, McDowell played professionally across multiple basketball leagues, including the G League, the VTBL League in Russia, LEB Gold in Spain and SBL in Australia.

Bousley comes to Longwood men’s basketball after three seasons at George Washington University, where he was named one of the Top 50 Impactful Mid Major Assistant Coaches by Silver Wave Media.

“I have known Graham since before I got back into coaching full-time and have always been impressed by his work ethic and personable style,” Aldrich said. “A really experienced coach who has served under some of the game’s best coaches in recent years, Longwood is truly fortunate to get a coach of Graham’s experience and caliber to come and join our staff. Beyond his experience, Graham also embodies so much of what we are looking for in a staff member through his selfless approach and eagerness to help the program achieve success. I could not be more excited about welcoming him to our staff and look forward to watching him grow and thrive here at Longwood.”

He was the offensive coordinator during his first two seasons at GW, helping the team run a prolific attack that also saw a pair of players set the single season record for made three’s in 2019-20. This past season, he was the team’s defensive coordinator for a team that ranked in the top 50 nationally in three-point percentage defense on the way to earning the program’s best seed in the A-10 tournament since the 2016-17 season.

In addition, Bousley helped recruit and develop a trio of players that ranked in the top five in scoring in the A-10 during his three seasons at George Washington in Jamison Battle, James Bishop and Joe Bamisile.

Prior to his time at George Washinton, Bousley served on Jamion Christian’s staffs at both Mount St. Mary’s and Siena University. During his season at Siena, Bousley helped recruit and develop Jalen Picket, the 2018-19 Metro Atlantic Athletic Conference Rookie of the Year and the first freshman in program history to earn National Association of Basketball Coaches District 1 First Team honors.

At Mount St. Mary’s, the team won 38 games over his two seasons on staff while going 26-10 in the Northeast Conference (NEC). During his first season on staff, his team swept the regular season and tournament championships and earned a trip to the NCAA National Tournament. That trip culminated with a First Four win over New Orleans. In addition, he helped Junior Robinson earn NEC Player of the Year honors in 2017-18.

Bousley began his coaching career at Virginia Commonwealth as a graduate assistant, and he followed that by working as the Director of Basketball Operations at Rice University from 2014-16 under current VCU head coach Mike Rhoades. He graduated with his undergraduate degree from Wisconsin, where he also served as a student manager, and he finished his master’s degree at VCU.

“We are excited to have Brian join our staff as our Video Coordinator,” Aldrich said. “Having competed against Brian as a player, and hearing about him personally from his coaches and prior bosses, it was very clear that Brian would be a wonderful fit for us at Longwood.  We are excited about welcoming him to Longwood and look forward to his joining our community.”

During the past two seasons, Smith served as a graduate assistant for the Hornets. In his time there, the team advanced to the Old Dominion Athletic Conference Championship once while posting a record of 20-16.

As a player at Randolph College, Smith was a dynamic scorer for the WildCats. He finished his career as the program’s all-time leader in 3-point field goals after draining 180 in his four seasons. He became the sixth player in team history to score 1,000 career points as well.

For his career, Smith totaled 1,021 points while also registering 279 assists, ranking third in the team’s history books. He is second all-time with 147 steals and is sixth in blocked shots.

A native of Prince William County, Smith earned his bachelor’s degree in biology at Randolph, and he obtained his master’s of business administration from the University of Lynchburg.

The Longwood men’s basketball team, fresh off a run to the NCAA Tournament after sweeping both the Big South regular season and conference tournament titles, will take the court in November. The team’s schedule will be released at a later date.