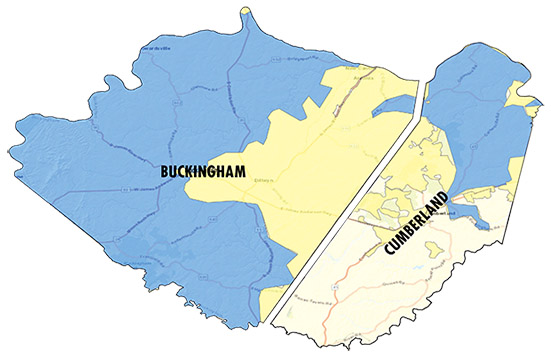 Here's a look at the areas of Buckingham and Cumberland counties where the RISE project will bring broadband internet. The areas in blue are currently served by broadband. The areas in yellow are locations where broadband is coming.

BUCKINGHAM – The Firefly project is moving forward. That was the word Wednesday, Aug. 24 as state and regional officials announced they’ve signed the contract that’ll expand broadband internet service in Buckingham and Cumberland counties.

This project started in December 2021, as then-Gov. Ralph Northam gave Firefly Fiber Broadband a $79 million grant to expand high-speed internet in rural areas. That’s what raised questions for some local residents, as they wondered why construction hadn’t started yet. But it wasn’t a simple case of immediately starting construction with that money.

For one thing, the $79 million didn’t cover the total cost. For another, the Virginia Department of Housing and Community Development (DHCD) had some requirements for Firefly and its partner, the Thomas Jefferson Planning District Commission (TJPDC), to fulfill first.

They had to reach out to the counties involved and get support. They also had to show where the rest of the funding was coming from. This wasn’t just a two-county plan. The full Regional Internet Service Expansion (RISE) project involves laying fiber lines across 13 counties, at a cost of $288 million.

From December 2021 to August 2022, Firefly worked to bring in $209 million to fully fund the effort. Some of that was from counties like Buckingham, where internet expansion has been a priority. The rest of it was from private sector dollars.

“Ours is a very large project, which required additional time,” Allshouse said.

That time came to an end Wednesday, as the commission finished the paperwork and signed the contract.

Who owns the network?

Who actually owns the fiber network once it’s built? That’s another question about the Firefly project. The answer is there’s not just one owner.

For example, in Buckingham and Cumberland counties, Dominion Energy will own the network. Under the agreement, Firefly will lease the “middle-mile” fiber installed by Dominion. Meanwhile, Rappahannock Electric Cooperative will own the parts where it delivers electricity in the counties of Louisa, Albemarle, Goochland, and Greene. Firefly will serve as the internet service provider.

What happens next with the Firefly project?

Part of the last eight months involved selecting the first areas to work on. That included places like Cartersville in Cumberland County, where construction is expected to be finished by the end of this year.

Firefly officials said in a statement they chose projects “through a competitive process that evaluated each project for demonstrated need and benefit for the community, applicant readiness and capacity, and the cost and leverage of the proposed project.”

Basically, the company ranked projects throughout the area, putting them in order based on the above criteria. That’s why you may see some start before others. Overall, Buckingham and Cumberland residents in the affected areas should see work starting within the month. The actual service for many of these people will go active by this time next year.

Now when we saw affected areas, what does that mean? Well, in Cumberland, the areas fill in pockets around Route 60 that are in Dominion’s electric service territory. In Buckingham, the areas start with Dillwyn and head north. There are also a few parts in the southeast portion of the county included in this.

Buckingham County officials said they were glad to see the work moving forward.

“The Board’s investment of federal relief funds and partnership with Central Virginia Electric Cooperative, FireFly, and Project RISE will result in those in the Dominion Energy footprint with affordable, high speed internet,” said Buckingham Board of Supervisors Chairman and Maysville District Supervisor Thomas Jordan Miles III. “This has been a top priority of the County’s. The completion of this long-awaited project will result in not only faster internet speeds, but the ability of school children to have better access to learning from home, local businesses to better thrive using technology, and residents to have opportunities to either work from home, stream, and connect with family and loved ones.”

(Editor’s note: The graphic at the top gives a look at the areas of Buckingham and Cumberland counties where the project will bring broadband internet. Blue areas currently get broadband service. The areas in yellow are locations where broadband is coming.)