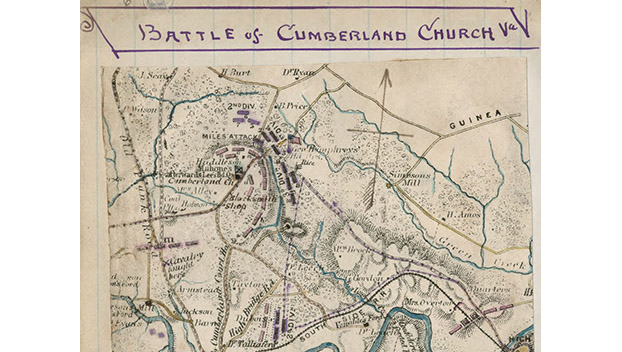 A look at part of the Battle of Cumberland Church. Photo courtesy of the Library of Congress.

CUMBERLAND – Cumberland County is the location for numerous events in American history. Now, the Appomattox-Petersburg Preservation Society has partnered with the American Battle Trust to preserve the battlefield from the Battle of Cumberland Church.

In a presentation during the August Board of Supervisors meeting, Michael Meehan, president of the Appomattox-Petersburg Preservation Society, explained the plan to preserve the battlefield from the Civil War.

According to Meehan, the Battle of Cumberland Church, also known as the Battle of Farmville, took place on April 7, 1865. This location is where the Union Army led by Gen. Ulysses S. Grant earned a victory by defeating Gen. Robert E. Lee’s army at what is present-day Jamestown Road.

Owners put the plot of land containing this battlefield up for sale last year, as it was zoned for development. The American Battle Trust purchased the land to give to the Appomattox-Petersburg Preservation Society to preserve it.

“There is no preserved land for Cumberland Church,” said Meehan. “There’s a marker on 45 saying hey there’s a battlefield here. So, this will be the first segment of land that will be preserved for the Battle of Cumberland Church.”

The American Battle Trust is a charity that has saved over 5,000 acres of battlefields for the American Civil War, the War of 1812 and the Revolutionary War since its founding in 1987.

A plan for preservation

The plan for this battlefield is for the preservation society to assume the Garlick Tract. According to Meehan, the Appomattox-Petersburg Preservation Society will turn it into a public battlefield park while ensuring its agricultural integrity. This means the land will still be farmed while containing trails with interpretive markers.

The property is 42.8 acres with 23 of the acres wooded and 900 feet containing Bad Luck Creek. The property contains many earthworks from both the Confederate and Union Armies. These earthworks include trenches and other modifications made during the stalemate.

“We’re glad you’re preserving it,” said Board Chairman Brian Stanley after the presentation. “Cumberland County was the first county to call for independence against the British and the English. It was done right here in this courthouse. We’re very cognitive of our history and we certainly don’t want to forget our history.”