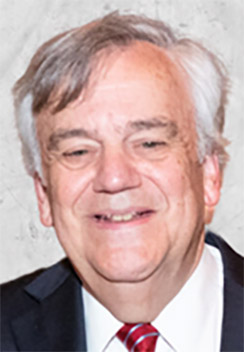 After leading Council of Independent Colleges in Virginia Inc. (CICV) for nearly 40 years, President Robert B. Lambeth Jr. is retiring with the distinction of being the longest serving president of a state private college association in the U.S.

Since 1983, Lambeth has served as president of CICV, a nonprofit organization representing 27 accredited nonprofit independent colleges and universities in Virginia. In that time, he worked with over one hundred presidents of Virginia’s independent colleges and universities to encourage collaboration and unity among the schools. According to a CICV news release, he led the organization in a variety of areas including government relations, joint institutional projects, business activities and collective marketing of member schools.

“I am very appreciative for the opportunity Virginia’s private colleges have given me to serve as the CICV president for almost 40 years,” Lambeth said. “It has been a rewarding, interesting, and challenging job. It has been my pleasure to work for numerous private college presidents and senior college administrators, many of whom have become close friends. I have also enjoyed having a close working relationship with many legislators and government officials.”

“Robert has been a tireless champion for Virginia’s independent colleges for decades,” said Dr. David Johns, president of Ferrum College and chairman of the CICV Board of Directors. “In his role, Robert has collaborated with lawmakers on all sides of the aisle to secure funding necessary to make students’ dreams come true. Likewise, through this work, Robert has been a champion and advocate for all who lead these colleges and universities. We are stronger and wiser thanks to Robert’s guidance and friendship, and we wish the very best in his retirement.”

During Lambeth’s presidency, CICV developed an innovative self-insured health insurance program for the employees of CICV institutions. The Virginia Private Colleges Benefits Consortium (VPCBC), which has provided high quality and affordable healthcare insurance for over a decade, currently covers 3,300 employees and 6,100 total lives. In recent years, VPCBC has become the model for similar programs established by Virginia businesses and private college associations throughout the country.

In collaboration with CICV college officials, Lambeth led the creation of the first nonprofit higher education multiple employer retirement plan (MEP) in the U.S. The CICV MEP provides retirement benefits to 16 CICV institutions and has more than $1 billion in combined assets. The CICV MEP has become the model for similar programs offered by other private college state associations.

“Robert is the most effective and talented executive I’ve ever worked with,” said Phillip Stone, former president of Sweet Briar College and Bridgewater College (both CICV member schools). “In Virginia, he’s the person most responsible for TAG grants. Robert came up with innovative ways to help colleges share operations to save money. Robert did it with great dignity and effectiveness.”

In 2017, Lambeth was a key proponent for a solar energy program that promoted solar energy at Virginia private colleges. This program was funded by the highly selective U.S. Department of Energy Sunshot Solar Grant Program.

“Robert’s superb leadership of CICV for nearly 40 years has had a truly profound impact on the direction and value of private higher education in Virginia and well beyond,” said Robert Lindgren, president of Randolph-Macon College (a CICV member school). “Robert is highly respected nationally, and his extraordinary creativity and perseverance have enhanced the lives of literally hundreds of thousands of students and their families in Virginia – all the while earning him the respect and admiration of those with whom he has interacted, from prospective freshmen and parents, presidents and faculty, to governors and legislators alike.”

At the request of the CICV Board of Directors, Lambeth will continue his work until a successor is selected. After retirement, Lambeth plans to support the work of Virginia nonprofit organizations and pursue consulting opportunities.