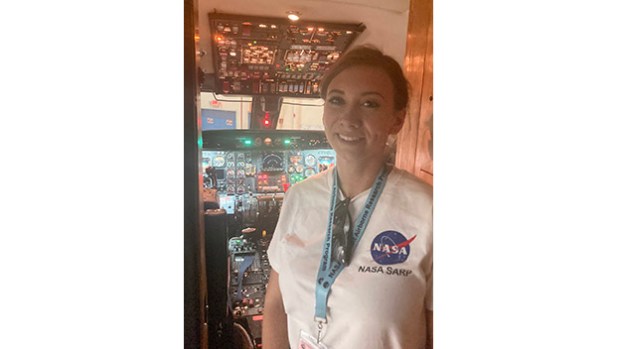 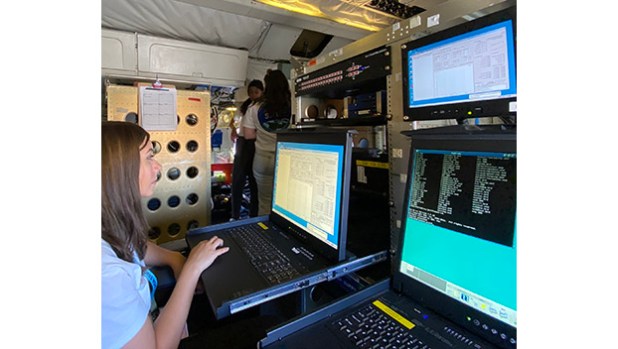 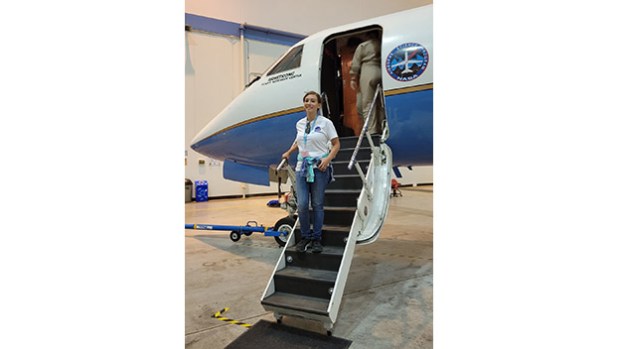 Teresa Orellana (’23) had a keen interest in science and loved asking questions from an early age. She was fascinated by paleontology and astronomy and dreamed of one day becoming an oceanographer. She even spent two summers attending NASA Space Camp in Huntsville, Alabama, learning about space sciences and robotics.

Fast forward about a decade after her childhood space camp experience and the rising Longwood senior has circled back to the federal space agency and is spending this summer completing a prestigious NASA research internship in California, studying aerosols and volcanos.

Orellana is one of 28 interns from across the country accepted into NASA’s Student Airborne Research Program (SARP). She spent the first half of the eight-week internship at NASA’s Armstrong Flight Research Center in Palmdale, California. The facility houses specialized science platform aircraft, such as the DC-8 flying laboratory, high-altitude research aircraft ER 2s, C-20A, Gulfstream III and the Stratospheric Observatory for Infrared Astronomy.

She collected atmospheric data aboard the DC-8 flying laboratory aircraft and took measurements at field sites. Orellana’s group is studying aerosols. Her specific project focuses on sulfate amounts emitted from volcanoes in the United States and determining if the level of those emissions are indicators of eruption.

“When a lot of people hear NASA, they think it’s just space — but it’s a lot of earth science and other things of that nature,” said Orellana, who is majoring in environmental sciences with a concentration in earth sciences.

With the data-collection portion of the internship complete, Orellana is now at the University of California at Irvine working with professors and researchers to evaluate her findings.

“I’m learning how to interpret the data and do experiments with it,” she said.

She is also preparing to present her findings to top staffers from NASA’s Washington, D.C., headquarters, who will be in California during the last week of the program to hear about what the interns have learned.

Orellana said she knew it might be difficult to get into NASA’s SARP program, but that didn’t dissuade her from applying. Then one day during the spring semester she was eating lunch in the Upchurch food court when she noticed she had missed a call from California. She called the number back and was thrilled to learn that she had been accepted into the program.

Orellana’s internship experience this summer is all the more remarkable considering this past spring semester was her first at Longwood and for studying environmental science. She started her college journey at Virginia Commonwealth University, where she was studying to become a dental hygienist. It wasn’t long before she realized that career path wasn’t the right fit. She transferred to Longwood, switched her major and hasn’t looked back.

“I said, ‘I’m going to follow my childhood dream and be a field scientist.’ It’s the best decision I ever made, honestly. I feel so much happier,” she said.

This past spring she received two awards — a Citizen Leader Award recognizing honor and integrity and Outstanding Integrated Environmental Sciences junior scholar of the year.

Orellana plans to go to graduate school after she completes her degree in fall 2023. She is interested in a master’s in geography and said she might eventually become a professor, based on her experience at Longwood.

“I work very closely with my professors,” she said. “They’ve been really fabulous in giving me career advice. And I like that they know my name.”