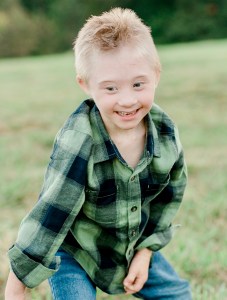 Landon Anthony Raber, affectionately known as “Waldy”, took the outstretched hand of Jesus and went home on Sunday, July 10. Landon was born on Oct. 16, 2015 to Cynthia (Lapp) and Jason Raber. From birth, Landon was the recipient of many nicknames including Waldy, Pork, Pork-A-Fizer, Master Wootie, Schnipps, Schnivelry and Handsome Man to name a few. These nicknames were most frequently coined by his uncles and used when they would play and wrestle with him, a favorite pastime of his and theirs.

Despite the fact that he couldn’t talk and didn’t walk until he was 5 years old, “Waldy” was best known in the Farmville area for the joy and community he brought through his ice cream truck, a business which the family liked to remind him that he started at the age of 4. Within the first several years of business, Waldy even invented his own ice cream flavor, which was a combination of two of his favorite foods, Peanut Butter and Jelly ice cream. His mission at his ice cream truck was to bring awareness to Autism and Down syndrome, but most importantly, for his patrons to experience the love of Christ through interaction with the Waldy’s staff and joy while in community with each other.

Landon was an admirer of vehicles, but especially Ford diesel trucks. He was often teased for being a “vehicle inspector” as he would spend a lot of his time repeatedly circling the family vehicles, dragging his fingers along the vehicle as he went, leaving the notorious “Pork Stripe”. He was also known by family and friends for having an amazing ability to rock and balance objects, particularly his favorite pot lid. Landon loved to listen to CeCe Winans, but his favorite song was Waymaker, which would bring comfort almost instantly as he would listen to it and sway his head back and forth. Landon also loved rides on the Gator with Mawmaw and Pawpaw around his grandparent’s farm.

Although the loss of Landon on this earth brings deep grief and sadness to the family and community, the family finds hope and takes much comfort in knowing that he has a perfectly whole body and is dancing and talking with Jesus, something we were never able to experience with him while he was here. Each person in the family anxiously awaits getting to know the perfect and complete Landon Raber in heaven.

The family would like to express their heartfelt gratitude to the Buckingham County Sheriff’s office, VSP, Buckingham Fire and EMS agencies, the state SAR team, and members of the community for their support and assistance.

Puckett Funeral Home of Farmville is assisting the family. www.puckettfh.com.