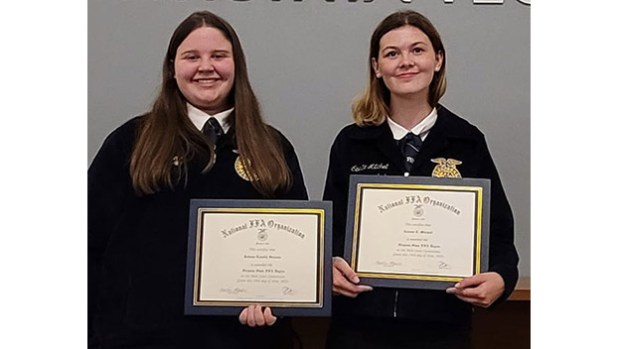 Pictured are Johnna Stevens, left, and Celeste Mitchell with their state degrees. 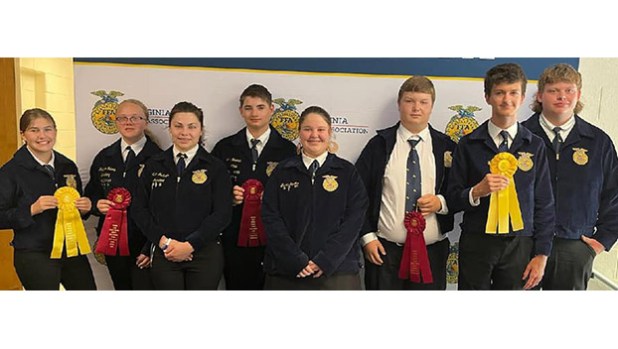 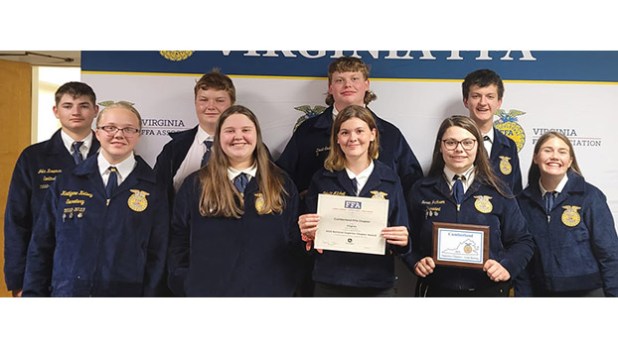 The Cumberland County FFA Chapter is coached by its advisor Joshua L. Fleenor and chaperoned by Terry Trent. The motto for this year’s state convention was “Overcome.” Given the past few years of COVID-19, this was certainly appropriate.

Awards and accomplishments chapter members who attended the convention earned are as follows:

• Celeste Mitchell was state runner-up in the Virginia Farm Bureau young farmers discussion meet. She also served as a member of the courtesy corps and received her state FFA degree.

• Johnna Stevens received her State FFA degree and served as a member of the courtesy corps.

• Tucker Bowman placed second, which is a red ribbon in the middle school agriculture mechanics competition, and competed in state talent show, playing guitar and singing.

• William Fleenor placed second which is a red ribbon in the middle school agriculture mechanics competition.

• Kaitlynn Kelsey placed third which is a yellow ribbon in the middle school small animal care competition and represented the chapter as a delegate for the southwest Area.

• Baylie Robison placed third which is a yellow ribbon in the middle school agriculture mechanics competition and represented the chapter as a delegate for the southwest Area.

Below are the requirements for some of the awards won by the Cumberland FFA Chapter.

• Candidate has been an active FFA member for at least the immediate past 24 months, and completed at least 360 hours of instruction in agricultural education at or above the ninth grade level.

• Candidate has been a chapter officer or served on a major committee.

• Candidate participated in at least five FFA activities above the chapter level.

• Candidate participated in the planning and completion of the local program of activities.

• Candidate has given at least a six minute speech.

• Candidate has in operation and has maintained records to substantiate an outstanding supervised agricultural experience program through which exhibits comprehensive planning, managerial and financial expertise.

• Candidate has earned at least $1,000 or has worked up to 300 unpaid hours or combination of the two.

• Candidate has productively invested at least $1,000, and has worked up to 300 unpaid hours or combination of the two.

• Candidate has achieved a satisfactory record of scholarship and participation in high school activities.

The National Chapter Award Program is designed to recognize FFA chapters that actively implement the mission and strategies of the organization. These chapters improve chapter operations using the National Quality Chapter Standards and a Program of Activities that emphasize growing leaders, building communities and strengthening agriculture. Chapters are rewarded for providing educational experiences for the entire membership.

Every chapter that meets the minimum quality chapter standards and completes Form I will qualify as a state superior chapter. To do this, chapters need to conduct one activity related to each quality standard in addition to meeting the minimum criteria outlined in the National Quality Chapter Standards. Chapters receive a superior chapter certificate each year they achieve this level. The chapter will also be eligible to compete for their state’s Gold, Silver and Bronze chapter awards.

To compete for state gold, silver or bronze awards, chapters must qualify for the superior chapter award and complete Form II. Chapters use Form II to report goals, plans of action and results/evaluation on three activities for each division. State judges rank the chapters as gold, silver or bronze based on the rubric. Chapters receive a multi-year plaque and yearly plaque inserts, commonly known as spurs, specifying the level achieved each year. The state’s top three gold chapter award winners or the number equal to 10 percent of the state’s total number of chapters, if that number is higher are eligible to compete for the National FFA Star Chapter Awards.