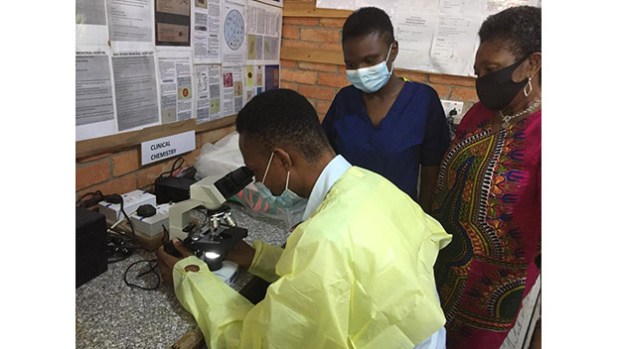 Above, the staff of the Ama Nyame Memorial Medical Center in Ghana are studying at the laboratory. 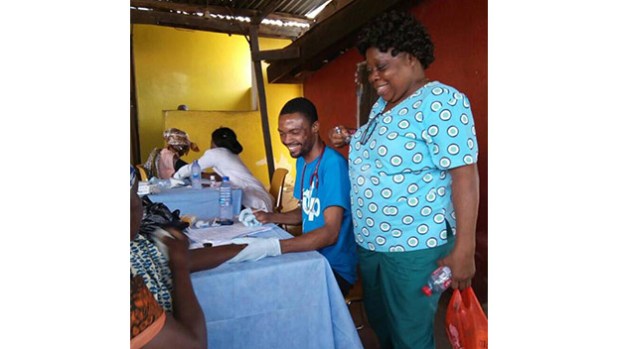 Dr. Kwabena Donkor is on a mission to get much-needed supplies for his hospital in Ghana.

Donkor, a physician, test specialist, pulmonologist and long time Farmville resident, recently returned to the community to gather supplies and raise funds for the Ama Nyame Memorial Medical Center — the clinic he created in honor of his late mother in Ghana.

In a July 22 interview, Dr. Donkor explained the history of the clinic and the importance of the supply drive and donations he seeks to add a much needed service.

Born in Kumasi, Ghana, Donkor’s parents both worked as farmers. His mother and father were both uneducated, but his father, who was the local chief, was able to take steps in learning through night study programs.

Donkor spent his childhood going to school. As he grew up, he graduated from the University of Ghana Medical School and became a general doctor. Soon after, he arrived in the United States at age 29 to further his studies in medicine at Tulane University Medical School in New Orleans, Louisiana. It was here that he was inspired to become a pulmonologist.

“There were a number of people who I considered to be like mentors to me at Tulane University Medical Center. I met some wonderful people, very bright people,” he said. “They sort of gave me certain things that allowed me to figure out what I wanted to do. Of all the various things that I saw, I just wanted to be a pulmonologist.”

Donkor said there were a couple of special things he liked about his mentors at the college — one of them being they were pulmonologists. He wanted to follow in their footsteps.

During his training in Tulane, his mother fell extremely ill back in Ghana, news that took nearly a year to reach him in the U.S.

Due to the superstitions of the country, her sickness was deemed a ‘spiritual illness’ and she was placed in a compound for those who are thought to be possessed by demons. Donkor flew back to Ghana to tend to her and was able to get her to the regional hospital in Kumasi.

“The woman I left wasn’t the woman I saw,” Donkor said of coming home to aid his mother. He said she had been “kind of bolterious and helped everybody” and that she had been a hard-working farmer. He found her looking “white as white paper,” and unable to walk on her own. “And that was hard for me,” Donkor said.

Once she got treatment, doctors found she had a common “tropical parasitic infection” caused by a hookworm. After treatment, she was able to start eating again after two weeks, but remained very weak.

Donkor’s mother did recover enough to be discharged from the hospital and return home. However, he said the year-long toll of the infection affected her heart, leaving her with breathing difficulties.

Donkor said he left Ghana to resume his studies once he was comfortable that his mother would be fine based on how she was improving. However, three days after returning to the U.S., he received word that she had passed away.

“I promise… if I ever get a chance, nobody should go through this again. For as long as I am alive.”

This was the beginning of the Ama Nyame Memorial Medical Center. In 2004, Donkor was successful in acquiring land near Kumasi despite facing the issues of traditions that remain strong in that region.

After sharing his story with Virginia-based friends and colleagues, word about his project spread and he was able to complete construction of the clinic thanks to fundraising and the help of missionaries. However in the past eight to 10 years, the clinic has been in need of important supplies to accommodate both the patients and the staff.

“We do have basic services,” he explained, noting that as the hospital began offering its services, people in the community found they were needing more. Additionally, as more people learned of the services, they found demand increasing beyond the capacity in place.

Likewise, Dr. Donkor talked in great detail about just how important the clinic is in need of support, sharing the story of a time when a patient didn’t survive.

“We did the best we could. Eventually the woman had passed on,” he said. While this outcome is not uncommon, what followed was because the corpse had to remain in the bed at the female ward shared by up to four others, as they do not have private rooms.

“There’s nobody who is awake who is going to be able to stay in the room with a corpse,” Donkor said, noting it is not air conditioned. “So now that ward is completely emptied out. And that’s the easiest part of it.”

Hospital officials then faced the dilemma of learning the family did not have the money to move the deceased, but they hoped to raise it in a day or two. Additionally, they did not have a way to move their loved one to the nearest hospital with a morgue that was 30 miles away.

“So now we have a corpse in the ward, for all that time, and there’s nothing that anybody can do about it,” he said. “Three days later on, I have a delegation from the family and two other families,” he said. “They’re asking me to make sure to build a mortuary at my center the first chance I get.”

Donkor said he is willing to build a mortuary, once the money is available to do so.

“It is sad… but there’s nothing we can do about it, other than do exactly what they’re asking us to do,” he said. “But we don’t have money to build a mortuary at this time. So how do we do it? Well, I have to go to people to tell them this is what we need. If we have money, we’ll do it.”

As such, Dr. Donkor is holding a supply drive in Farmville alongside Justine Young, chief executive officer of Piedmont Senior Resources and a friend of his for more than 25 years. The drive is focused on raising funds for the mortuary, while also collecting important smaller medical items. Contractors estimate that the mortuary will be about $25,000 for the construction project. Young states that the drive is open to the public and to anybody who wants to help.

“The main goal right now is to… provide supplies that they can’t get or can’t afford,” he said. “But right now, we’re just doing small stuff.” He said he is asking for donations small items, such as baby aspirin and multivitamins with iron.

Donkor said he will ensure anyone from the Farmville community that they’re donations will not go in vain.

“The only promise …we can make is this — every dollar that is contributed to and towards this mortuary will be put into it. Every dollar,” he said, noting the need to get this thing done. “When people say they make contributions, that’s where it’s going to go.”