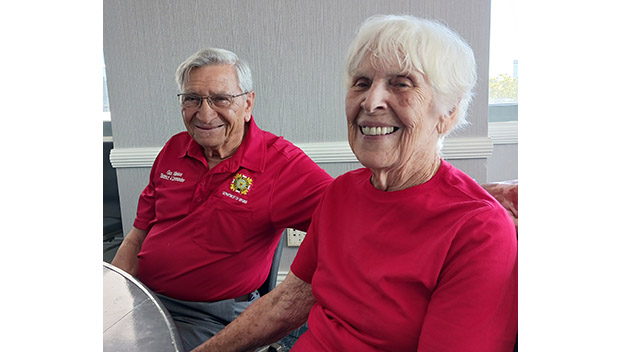 The 89-year-old retired Navy Master Chief shows no signs of slowing down as he promotes the work of the VFW throughout Southside Virginia. His district stretches from Buckingham to Clarksville, Farmville, South Hill to Amelia and everything in between.

Born in El Paso, Texas and raised in Indiana, Villalobos joined the Navy at the age of 18. There was a war in Korea and he wanted to do his duty to his country. He reported directly to his ship, the USS Southerland (DDR-743) and became a “Radioman Striker” which was basically an apprentice for on-the-job training.

In that capacity he learned Morse Code and became proficient in translating Morse messages for consumption by the ship’s Captain and senior staff. He said, “Morse was the mode of communications. You had to type the dit-dots. You become very good at it.” To this day, he can still read and transmit Morse Code.

The Southerland was a radar-picket destroyer; equipped with sensitive radar equipment that increased the range of detection of enemy aircraft and surface vessels. Villalobos recalled the ship conducting shore bombardment on Communist gun batteries and threats to Allied ground forces further inland.  It also conducted coastal patrols and escort duty for U.S. aircraft carriers in the Sea of Japan and Yellow Sea. On one occasion the Southerland was hit by a Communist shore battery, but damage was minimal.

Villalobos recalled, “Excitement! It happened so fast I wasn’t scared.” He also recalled the Communists floated mines in the waterways to sink the American ships and all onboard.

He left the Navy after his first hitch to attend college but re-enlisted within 90 days as a Radioman First Class. In time he crossed trained as a Cryptologic Technician and earned the top enlisted rank of Master Chief Petty Officer retiring in 1974. He was the Senior Enlisted Advisor for the Naval Security Group in Rota Spain at the time.

After retiring from a second civilian career, Villalobos and his wife Aggi, herself a Hoosier navy veteran, moved to Lunenburg where her two brothers and their families had moved. Villalobos joined the VFW twelve years ago as a member of the Victoria Post and has held many leadership positions in the Post and District, serving as District Commander on four occasions.

This week he was at the VFW State Convention proudly watching four Posts in the District receive awards for the All-American Team and other recognitions. “Across the District, our members are doing good things for their communities, from our youth programs to aiding veterans and their families,” Gus said.  “Seeing our local members get recognition for their work is a good thing.

“Our desire for the new 2022-2023 year is that all of our District posts earn All-American rank,” he said. “That means we also need to reach out to eligible wartime veterans to welcome them ‘home’ so they can enjoy the fellowship and camaraderie of our veteran community.”

Individuals interested in the Virginia Veterans of Foreign Wars can visit https://vfwva.org to find a VFW Post near them.