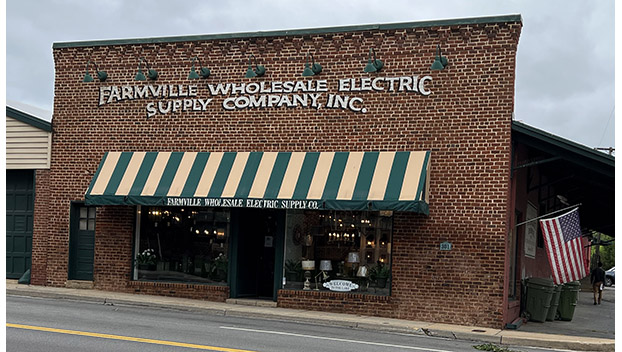 One family has helped spread its light across Farmville and beyond for half a century.

On June 2, 1972, the supply company sprang out of a different family business. Lynwood Smith was part of Smitty Brothers Electric Co. Inc. for 33 years with his two brothers. He always wanted to have an electrical business at the wholesale level, so he shared his vision with his son, Gordon Smith. After returning home from college, Gordon Smith got to work to make it happen.

For the next six months, Gordon Smith worked on setting up the new shop. He contacted manufacturers, built shelves and got the building prepared to open for business. Luckily, Gordon Smith had his dad’s experience to let him know what to have in stock and what customers would look for in the store.

Finally, after six months of hard work, the store officially opened to the public on Jan. 2, 1973. Five years later, Gordon Smith’s brother, Stan Smith, graduated from college and partnered with him to run the shop their father always dreamed of having.

“It feels good and there’s a feeling of some measure of accomplishment being around this long,” said Gordon Smith.

Over the past 50 years, the shop has seen many changes. It started with one employee and now employs 24 people. One of the more notable changes for Gordon is technology. He remembers being one of the first businesses in Farmville to have a fax machine. Now, thanks to the internet, the shop is able to do business all across the country with their online store and at a much faster speed.

Farmville Wholesale Electric Supply is best known for its lighting showroom. According to Gordon Smith, customers have come from all over Virginia and even out of state to view the selection.

“What I enjoy the most is the people we deal with have become friends,” he said. “Not just the customers, but the manufacturer and suppliers. I personally really enjoy it. Having a relationship with the customers and manufacturer makes it fun.”

To show appreciation to its customers, Farmville Wholesale Electric Supply will host a small celebration on June 3 at the store. They will grill hot dogs and hamburgers and show their appreciation to those they have done business with over the years.