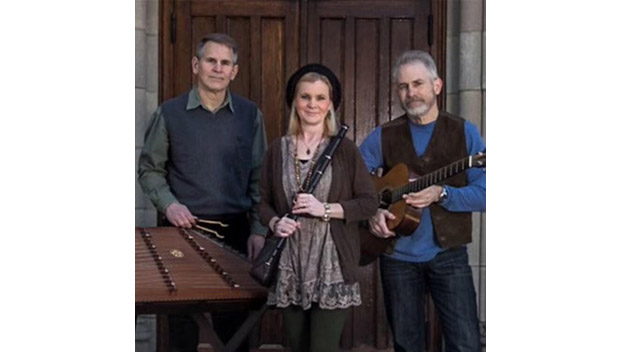 PolyCeltic, an acoustic trio who focuses on a British Isles/American folk sound, will perform at the Farmville Presbyterian Church Saturday, May 21, at 7:30 p.m. The concert is free and open to the public.

Lead vocalist Chris Lucas plays guitar, melodica and harmonica. Holding two music degrees from Virginia Commonwealth University, he has been involved in performing and teaching in the Richmond area for many years, while working full time for the Richmond Times-Dispatch, from which he retired in 2016. PolyCeltic’s “Amid The Winter’s Snow” album is the seventh CD he has recorded and produced. He currently teaches at the Veritas School in Richmond, and also performs solos in many area establishments, as well as being involved in leading worship and playing in his home church in Richmond.

In addition to being an accomplished flautist, Michelle Matts plays pioccolo and pennyhwhistles and provides vocal back up for the group. She holds a Bachelor of Music Education Degree from VCU and a Master of Music Degree in Flute Performance from the University of Arkansas. Matts performs as a soloist and chamber musician in various concerts and events throughout Virginia and the United States. She is a music teacher and most specifically these days, a private flute and piano teacher. She is married and home-schools her five children.

Tom Abernethy began playing guitar and banjo as a teenager, and became interested in the hammered-dulcimer after hearing a recording of “Somewhere Over the Rainbow” in the 1980s. That led to over 30 years of playing the hammered dulcimer. He recorded a solo CD of his own instrumental compositions and arrangements featuring the hammered-dulcimer in 2000. He is in great demand and plays with several musicians throughout central Virginia. Abernethy enjoys playing regularly for worship services at his local church. He and Lucas have played together in one style or another for many years. Abernethy currently teaches math at Mechanicsville High School.

Abernethy and Matts began playing together in 2017 and decided they needed a name, as concerts were becoming more frequent. Abernethy suggested “PolyCeltic” – “Poly,” meaning “many” from Abernethy’s math background, and representing many genres of music. And “Celtic” representing the Irish/Scottish songs, instruments and flavor of much of the music they play. Lucas joined PolyCeltic a year later. The name proves to be symbolic of the many tunes in their repertoire, largely with Celtic origin or flavor.

In a recent interview, Michelle commented, “We enjoy playing in PolyCeltic because we never cease to be inspired by the sound of these instruments played together.” She used these lines from Henry David Thoreau, “When I hear music, I fear no danger, I see no foe. I am related to the earliest times, and to the latest, to describe the group’s enthusiasm for performance.