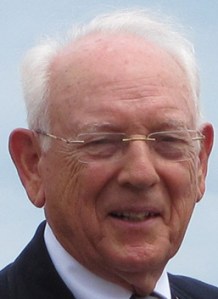 Robert Earl Bryant, 87, passed away on May 8, at his home in New Canton, with his family at his side. He was born on Jan. 4, 1935 in Arvonia and graduated from Marshall District High School in Buckingham County. On June 26, 1955, he married his high school sweetheart, Annie Kate Jones.

At age 18, Robert, known as Bob to his railroad associates, went to work for the C&O Railway in Richmond as a Messenger Boy and advanced in the company through of a succession of positions with increasing responsibility, working in cities such as Columbia, South Carolina; Richmond, Virginia; Memphis, Tennessee and Atlanta, Georgia until finally retiring as a Market Manager in Baltimore for CSX after almost 35 years of service.

After retiring, Robert moved back to Buckingham County and, with Annie, founded the Buckingham Branch Railroad in 1988. He founded the BB out of his love of railroading and the desire to continue freight service to his home county of Buckingham and the Commonwealth of Virginia. Under his guidance, the BB grew from a tiny 17.3 mile long railroad with two employees to its size today of 280 miles of track with 80 employees, now the largest short line railroad in Virginia.

In 2015, the Virginia General Assembly passed a resolution honoring Robert and Annie for starting and developing the Buckingham Branch Railroad and their exceptional service to the Commonwealth by restoring rail lines, strengthening transportation infrastructure and doing so with honesty, integrity and strength of character.

Robert also loved farming. He loved being out on the land, caring for the pastures, working the hayfields and taking care of his small herd of Angus cattle. He was a committed traditional farmer and cared deeply for the health of his farm and the ecosystem that supported it. He was an avid gardener and each year his garden provided a bounty of vegetables for family and friends. One of his passions was making sorghum syrup (molasses) and each year it would become a community project at harvesting time. After pressing and cooking the sorghum, he would bottle it and give it away to family, friends and local community.

Robert was a person of deep integrity and believed strongly in responsibility to oneself, family, friends, community and church. His strong character combined with his deep curiosity and love of learning inspired everyone he came in contact with. A very creative person, Robert loved music, especially singing and playing piano and guitar. He was well known for his sense of humor and was quick to make a joke or offer an amusing comment. He was also an inventor who was always finding easier and better ways to do things and he could fix anything.

Central to Robert’s life was his Christian faith and his church, Mt. Zion Baptist Church, where he was a Deacon.