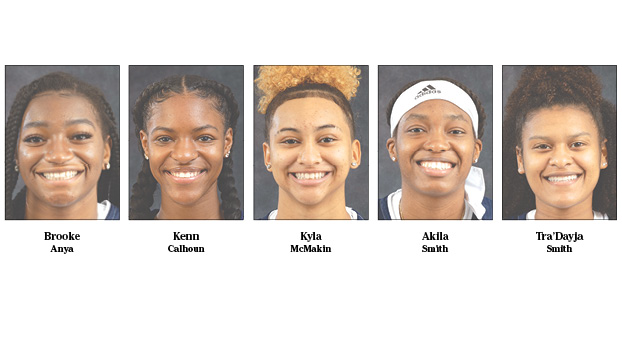 A monumental year for the women’s basketball program was made even sweeter with five players recognized with all-conference honors, tied for the most ever awarded to Longwood in the Big South era.

The senior forward stands at 5-11, and finished third in the country in blocked shots with 89, and fifth nationally in blocks per game at 3.07. It marks the third straight season Smith has set the single-season blocks record, breaking her record of 88 set last season. Plus, Smith is the only player who stands less than 6 feet tall who is in the top 50 in blocked shots across the nation.

Plus, Smith averaged double-figures in points for the second’s straight year at 16.8 points per game, finishing third in both points per game and final points (488) in the Big South.

In the senior’s fourth year with the Lancers, she grew as a team leader on the court did as well. Smith was the cool breeze and could calm any storm, and she routinely guarded one of the top threats on the opposing team, regardless of position. Smith had four double-doubles and added her second career triple-double early in the season against Sam Houston. That triple-double comes as only the third in program history for Longwood.

Smith national ranks don’t end on the defensive side of the court. She was also nationally ranked ninth in field goal percentage (.588 pct) and 13th in field goals made with 211. Smith had 25 double-digits scoring games, including the final 12 conference games in a row. She averaged 17.7 ppg during Big South play, along with conference averages of 1.8 steals per game and 2.1 assists per game.

McMakin faced the toughest defenders and defensive schemes all season long, still managing to lead the conference in final points (529), grabbing double-digits 26 out of 28 times this year. McMakin scored in double-figures in every conference game and averaged 18.2 ppg on the year – 19.6 in conference game alone. McMakin added eight games with 20 plus, one of those being a season-best 33 against Gardner-Webb.

As far as McMakin’s Lancer career goes, the junior also became the second fastest in program history to reach the 1,500 point milestone, doing so in her 82nd career game.

Graduate student point guard Tra’Dayja Smith earned her Big South Honorable Mention honors after another season leading one of the top scoring outfits in the Big South. Smith, who has worn a Lancer uniform for three seasons, has her name dot the Lancer record book in multiple places. This is the second straight season Smith has been recognized with Big South Honorable Mention honors after starting at point for the second best offense in the conference.

The Madisonville, Texas native finished the year first in the conference, 16th in the nation, with 156 assists (5.4 assists per game). Smith added two more double-doubles to her Longwood belt this year, and had 15 games where she scored in double figures. She averaged 10.3 points, 3.5 rebounds and 1.4 steals per game, and she was sixth in the conference for minutes played.

Rounding out the court side all-conference awards is Kennedy “Kenn” Calhoun. Calhoun finished second in the conference and seventh nationally in total steals with 79. Calhoun added her name to the Longwood record book, and she sits tied for seventh in the single season steals total with postseason basketball left this season. She becomes the first entry to the list since the since the 1999-2000 season.

Calhoun’s menacing defense led her to guard the best offensive players on each team as a freshman, and she averaged 2.79 steals per game, finishing in the top 20 in the country doing so. Calhoun average 10.4 points per game in Big South play, and had six games in double-digit points – five of those games coming in Big South play.

Finally, Brooke Anya scored her name on the Big South All-Academic Team with an overall gpa of 3.675. Anya is a Business Administration student who has made the dean’s list twice in her Longwood career. She is an active member academically as well as making a name for herself on the basketball court. Anya is a part of the Cormier Honor’s College for Citizen Scholars, a two-year member of SAAC (Student Athlete Advisory Committee), and a member of the Black Athlete Affinity Group at Longwood.

On the court, Anya earned a career high 10 points in the battle for the top spot in the Big South at USC Upstate. Anya grabbed five starts this season and appeared in every game for the Lancers. In conference only, Anya averaged 3.4 rebounds per game and shot .464 from the field.

As far as the season goes for Longwood, the team set a new record for most overall wins, and conference wins in the Division I era. The team also set their eyes early in the season on a top one or two spot in the conference, and earned the two seed going into the tournament, as well as the programs first ever regular season title, finishing co-champions at the end of the year.

Five All-Conference accolades is the most ever awarded to the women’s basketball program, and they have hit that now two season in a row.

The 2022 Hercules Big South Championship Tournament begins tomorrow, Tuesday March 1. Longwood received a by in the first round and will continue what they started on Thursday March 3, against either Radford or Hampton University at 6 p.m. at the Bojangles Coliseum in Charlotte.