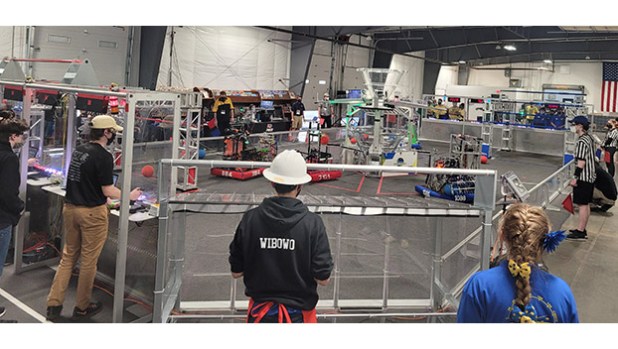 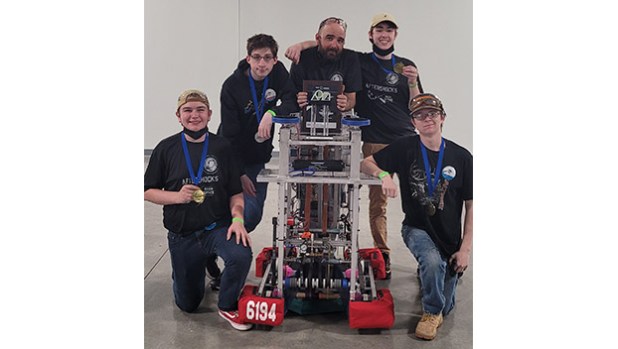 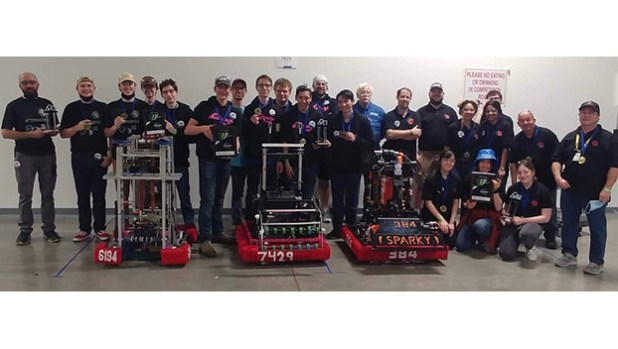 In the Sunday finals robotic alliance teams are, from left, Aftershocks, Convergence and Sparky.

The weekend of March 5 and 6 the Cumberland High School Aftershocks robotic team competed in two regional FIRST Robotics Competition events in Colonial Heights against teams from all over the state. The team placed 15th in the first event on Saturday and won the second event on Sunday.

The competition format pits three random teams against three other random teams. This year’s challenge required students to build a robot that could gather 9.5 inch tennis balls and shoot them into various goals before attempting to climb a set of monkey bars with a 120 pound robot. Only one other team elected to compete in both Saturday and Sunday’s events meaning the Cumberland team would face an entirely new slate of opponents on Sunday without any time between events to fix any issues that arose on Saturday.

Saturday’s event was a tough day. Against a field of juggernauts, the Aftershocks (Team 6194) ranked as high as third before slipping to 15th out of 18 at the end of the day with a record of three wins, six losses and one tie. While disappointed, the team’s robot was in one piece and fully functional for the next day’s event.

The team arrived on Sunday rested, relaxed and ready to go at it again. The Aftershocks fought hard throughout the day, ending up in the semifinals and finals in an alliance with the No. 1 seeded Convergence (Team 7429 from Midlothian) and the number 4 seeded Sparky (Team 384 from Henrico).

In the semifinals, the trio shut out Cavalier Robotics (619 from Charlottesville), Botetourt 4-H Robotics (3939 from Buchanan) and Royal Robotics (3359 from Portsmouth) with back to back wins, scoring 53-30 and 48-32.

In the finals, the Aftershocks, Convergence and Sparky faced Blue Cheese (1086 from Glen Allen and the 2016 FIRST Robotics Competition World Champions), Mean Caimans (Team 6802 from Cedar Bluff and currently ranked first in the district) and Phantom Robotics (Team 2028 from Hampton).

This is the first district level win for both the Aftershocks and Convergence. Depending on district ranking points, Cumberland may advance to the District Championship in April.

The Cumberland Aftershocks are sponsored by Mid-Atlantic Broadband Cooperative and SEI Engineering.

The Aftershocks are coached by Evan and Allison Jones, both teachers in Cumberland County and Eli Whaley, an Aftershocks alumni.