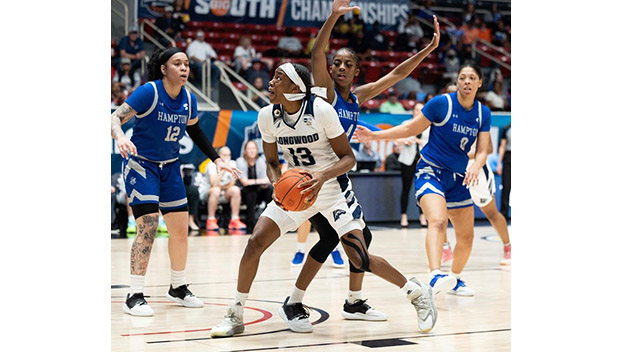 No more underdog hoping to pull off an upset or two in the Big South Tournament. This year Longwood women’s basketball is regular season co-champ, No. 2 seed – and hungry to keep playing into March.

One win down, two to go as the Lancers chase a first-ever Big South tournament title and NCAA Tournament bid.

Big South Player of the Year Akila Smith dominated with 28 points and a career-high 19 rebounds, Tra’Dayja Smith added 13 points, and Longwood held on after building a big first-half lead to beat Hampton 70-61 in the quarterfinals of the Big South Tournament on Thursday at Bojangles Coliseum.

The Lancers (19-11, 15-3 Big South) move on to the semi-finals Saturday at 8 p.m. against the winner of the USC-Upstate-UNC-Asheville game later Thursday.

The best news for Lancer fans is this team – now 12-1 over their last 13 games – is playing its winningest basketball when it matters most.

None more so than Smith, who followed up her season-high 29-point effort in the regular season finale last weekend against Hampton by anchoring a smothering defensive effort that held the Pirates to just one field goal over nearly 16 minutes to start the game as Longwood built a 38-18 halftime lead.

But basketball wisdom holds it’s never easy to beat the same team three times in a season — the Lancers were trying to top the Pirates for the third time in 12 days – and Longwood ended up needing the cushion. Hampton heated up in the second half – it shot 70 percent in the third quarter — and flustered the Lancers with an aggressive press, cutting the lead to 66-61 with just over a minute to go. Longwood fans couldn’t fully exhale until two free throws by Tra’dayja Smith with 27 seconds remaining put the game out of reach.

The dominating first half on defense was the difference, as Longwood forced the Pirates into 1-for-17 shooting to start the game.

Smith’s numbers in the first half alone – 15 points, 13 rebounds, 2 blocks – would have been a great full game’s work for most players. As Longwood tries to extend its historic run, Tillett knows they’ll be riding on the back of their star senior at both ends of the court.

“With Akila, she’s always full of another surprise and another level,” Tillett said. “I think we’re just seeing that. I still don’t think we’ve gotten all the way to where Akila can go and what she can do for the program.”

“Just seeing her growth as a leader,” she added. “That calm she displayed when they made a run. She’s special.”

Longwood built the lead that proved insurmountable in the second quarter. Anne-Hamilton LeRoy’s 3-pointer and free throw near the midway point capped 10-0 run over less than a minute that put Longwood up 30-8 en route to its 38-18 halftime lead.

As Hampton rallied in the third quarter, Smith and Milou Vennema each assisted the other on lay-ups 32 seconds apart just before the quarter break to steady the ship for Longwood. In the fourth quarter the Pirates kept coming, but Kyla McMakin, who finished with 9 points, hit her only 3-pointer of the game at a key spot with 2:44 to go.

A strong contingent of Longwood fans made the journey and – with the Longwood’s men’s team also cheering from the stands ahead of their quarterfinal game tomorrow – provided a needed source of energy as the Lancers closed out the victory.

Smith, third in the nation in blocked shots and the only player in the top 50 under six feet tall, said the team showed what it could do when all engines are running in the first half – and also be cool under fire when it had to withstand a run in the second.

“For us in the beginning of the game, we had the right mindset,” Smith said. “We wanted to go out and attack and we did. But we also knew it wouldn’t be easy, there would be challenges, a bump in the road, and I think we got over that.”

“Being in this spot is different for us, different in a good way,” Tillett said the Lancers’ new role of coming into the Big South Tournament seen as a contender. “This challenging season we’ve had, and the different places we’ve had where we’ve had to come out of a valley have prepared us well.”