Lancers pull out another thriller in overtime 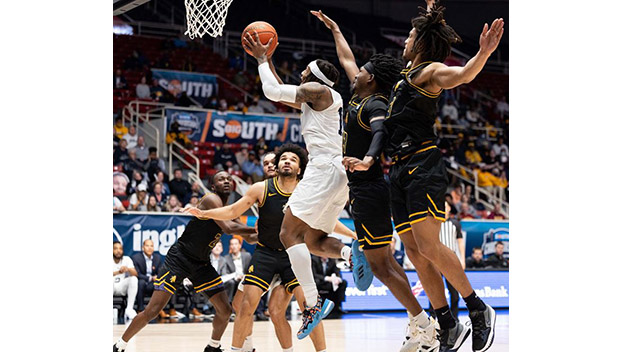 Justin Hill had 24 points in the quarterfinal game to help the Lancers win in Overtime. (Photo by Mike Kropf)

It was like they were back in Willett Hall. Justin Hill raised his arms to the delirious Lancer fans, urging them on as the clock ticked down.

The Lancers (24-6) had done it again. Another heart-thumper. Another come-from-behind win. Another victory because Longwood was the better team in the final minutes.

This time it came on the biggest stage yet – with another milestone there for the taking. Now in the Big South Tournament semi-finals, Longwood is just two wins away from its first-ever NCAA Tournament berth.

Hill scored 24 points, Isaiah Wilkins added 15 points and 12 rebounds, and Longwood dominated overtime Friday to beat North Carolina A&T 79-65 and avenge its only regular-season conference loss. The Lancers will play in the semi-finals Saturday at noon against either Charleston Southern or USC-Upstate.

“The biggest thing is they have an uncanny ability when things get tight, they calm down,” said Head Coach Griff Aldrich “It really goes back to the chemistry that they have and the confidence they have in one another and themselves.”

Once the Big South Tournament tipped off, Longwood knew the No. 1 seed it earned as regular-season champion wouldn’t matter much. The league is close top to bottom –four of the five tournament games so far have gone to OT, and the other was a buzzer-beater – and the Aggies’ physicality and 3-point shooting made for a dangerous match-up.

NC A&T overcame a 10-point second half deficit to retake the lead in the final minutes, and had a chance to go ahead with a pair of free throws with 13 seconds left. But Kameron Langley missed them both, and after Wilkins’ 3-point attempted clanked off the rim at the buzzer, an instant classic March Madness battle was headed for extra time.

In overtime Longwood – winners now of 10 of 11 games against Big South opponents after trailing at some point in the second half — had too much depth, too much poise, and too much Justin Hill.

The sophomore from Houston, who also finished with seven rebounds and 5 assists, scored 10 of his 24 points in the extra period, icing a game whose 14-point final margin did little to reflect the tense, back-and-forth battle that played out over the first 40 minutes.

Hill grabbed the limelight, but ultimately it was Longwood’s depth that made the difference. The balanced scoring included 17 points on 4-of-5 3-point shooting from DeShaun Wade, along with 12 points from Zac Watson. And against a tall and physically imposing A&T lineup, the Lancers outrebounded the Aggies 43-33.

Nobody is mistaking the Lancers for a dominant No. 1 seed. But their uncanny ability to withstand runs like A&T’s second-half comeback Saturday is what’s brought them this far – and what they’ll likely need the rest of the weekend to keep their historic season running toward the ultimate goal.

“We don’t get too down on ourselves when things don’t go our way,” Hill said. “We stay the course. We’re really good at doing that. Just sticking to our principles really helps us finish games. When it’s on the line we know exactly what to do.”

Aldrich says the poise is something his team started building long ago. Now it’s there when to draw on when it matters most.

“It really goes back to the chemistry that they have and the confidence they have in one another and themselves” he said. “These guys have worked so hard for months on end, and I know a lot of teams do. But I think their confidence is built in the work that they put in.”

“These guys are extremely resilient, certainly the most resilient team I’ve ever been associated with,” he said. “They’re a lot of fun to coach. And they just have a lot of confidence.”