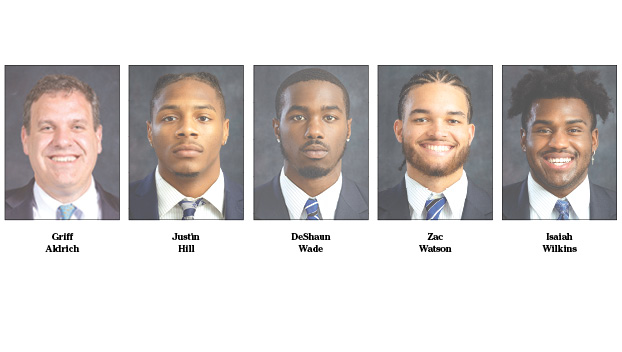 A banner season for Longwood men’s basketball keeps getting better once the Big South All-Conference honors were announced Tuesday morning.

Head coach Griff Aldrich was named the Big South Coach of the Year, a program first since joining the league. He was flanked by Big South First Team selections Justin Hill and Isaiah Wilkins as well as Big South Honorable Mention DeShaun Wade.

This is the first time the Lancers have had two players earn spots on the All-Big South First Team as well as the first time that three have earned all-conference nods since joining the league. In addition, Zac Watson was named to the Big South All-Academic Team.

Aldrich, now in his fourth season at the helm, led the Lancers to their best season in the program’s Division I history. The Lancers claimed the overall Big South crown outright, the first time the team has done so since joining the Big South. Plus, the team’s 23 overall wins and 15 conference wins easily were the most since the Lancers joined the Division I ranks. That also translated to a 16-1 record at home in front of raucous crowds at Willett Hall, the program’s best home record in Division I.

That success came off the back of a balanced attack that saw three players average in double figures in Hill, Wilkins and Wade, with Hill serving as Longwood’s engine on offense. The dynamic sophomore was Longwood’s leading scorer at 13.9 points per game (12th in the conference) for the highest-scoring offense in the league.

The Houston native elevated his scoring to 16.5 points per game (fourth in league play) in conference games, and he also was one of the top passers in the league, averaging 4.1 assists per game with a 1.7 assist-to-turnover ratio. Defensively, he also 1.5 steals per game, good for fifth in the league. He was also named the Big South Player of the Week twice this season and scored in double figures 19 times in his 27 games.

When the team needed a big shot, Isaiah Wilkins always seemed to deliver, usually off a pass from his fellow All Big South First Teamer in Hill. The senior averaged 12.6 points per game (16th in the Big South) while also serving as Longwood’s leading rebounder at 6.0 rebounds per game (sixth in the league).

He shot .408 (53-130) from three and scored in double figures 20 times this season, best on the team, and he hit at least three three’s in a game nine times this season. On defense, Wilkins was third in the Big South with 1.6 steals per game. The Winston-Salem, North Carolina native was named the Big South Player of the Week two times this spring.

Wade served as a deadeye marksman, dogged defender and team captain throughout the season on his way to earning Big South Honorable Mention. The senior averaged 11.7 points per game while draining .430 (64-149) of his three’s, as he and Wilkins were a potent combination from downtown. Wade seemingly never missed from three in conference play, shooting .494 from distance, and he hit at least four three’s in a game five times in the team’s final 10 games.

He hit double figures in scoring 16 times while also routinely guarding the opposing team’s top perimeter player on defense. He was ninth in the conference with 1.2 steals per game and helped Longwood’s defense rank third in the league in points allowed per game. The Lancers held 10 opponents to fewer than 60 points this season.

Watson earned his spot on the All-Academic Team behind a 3.81 cumulative GPA. He has been on the dean’s list all three semesters since coming to Farmville, and this season the senior has been one of the team captains. The Business Management major has started every game this year for Longwood, and he averages 7.6 points per game while scoring more than 10 points eight times this season.

Now, the team heads into the 2022 Hercules Tires Big South Championship Tournament as the top seed for the first time in program history, and they await the winner of No. 8 North Carolina A&T and No. 9 Radford on Friday, March 4 at noon. With a win, the Lancers would advance to the semifinals on Saturday, March 5. The Big South Championship will be on Sunday, March 6 at noon. All rounds except the championship will air on ESPN+, with the championship game airing on ESPN2. All games will also be on the radio on WVHL 92.9 Kickin’ Country.