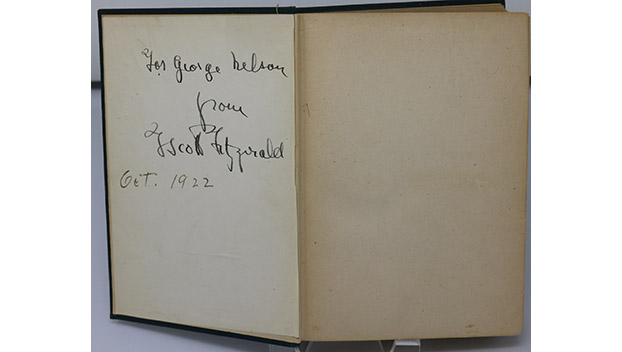 Nestled amid the extensive Archives and Special Collections of Greenwood Library is a rare gem: a first edition of famed American author F. Scott Fitzgerald’s novel, The Beautiful and Damned, which includes the writer’s signature.

Archives Specialist Jamie Krogh outlined the book’s journey to Longwood: “The Greenwood Library’s Special Collections edition of The Beautiful and Damned is a first edition second printing signed by F. Scott Fitzgerald to George Nelson in 1922. Nelson collected books signed by famous authors, and some of his collection was donated to Longwood by his sister, an alumnae, after he died.”

Though somewhat less well known than Fitzgerald’s other novels such as The Great Gatsby and This Side of Paradise, The Beautiful and Damned is important for several reasons.

First, the novel is semi-autobiographical, tracing the chaotic courtship and eventual decline and disengagement between main characters Anthony Patch and Gloria Gilbert, including parallels with Fitzgerald’s marriage to his wife Zelda.

Second, according to Professor of English and Chair of Longwood University’s Department of English and Modern Languages Dr. David Magill, the novel illustrates the attitudes of young people of the day: “F. Scott Fitzgerald’s The Beautiful and Damned captures 1920s America: young, white, rich, hedonistic and deluded. Fitzgerald draws on his marriage to Zelda Sayre to present the reader with a deep character dive into protagonists Anthony and Gloria Patch, representatives of a decadent and doomed era.”

Finally, the book highlights the movies, music and popular culture of the time period, including such timely tunes as “He’s a Rag Picker” and “Everything’s At Home Except Your Wife.”

According to Longwood Professor of Music and Director of Jazz Ensembles Charlie Kinzer, “Fitzgerald’s seemingly anodyne references to certain songs of the Tin Pan Alley era not only help him portray the milieu of high-society Manhattan during and after World War I, but in several instances offer the reader an enhanced understanding of the motives, psyches, and destinies of his characters.”

An event sponsored by Greenwood Library will celebrate the legacy of F. Scott Fitzgerald and offer participants the opportunity to step back into the world of the 1920s, replete with flappers and fedoras.

“The Roaring of the Twenties: Celebrating 100 Years of F. Scott Fitzgerald’s The Beautiful and Damned” will take place on Wednesday, March 16, at 7 p.m. in Wygal Hall’s Molnar Auditorium on the Longwood University campus.

The program will include a display of Greenwood Library’s copy of The Beautiful and Damned with an overview of the book’s publication and provenance by Archives Specialist Jamie Krogh, followed by academic discussion of the novel’s significance with Dr. David Magill and Elizabeth Hall Magill. The program will also include several early 20th century musical numbers by Charlie Kinzer and colleagues from the Longwood Department of Music and a reading from the book by Waterworks Players.

Costumes are encouraged. A reception will follow in the Wygal Hall Haga Room.