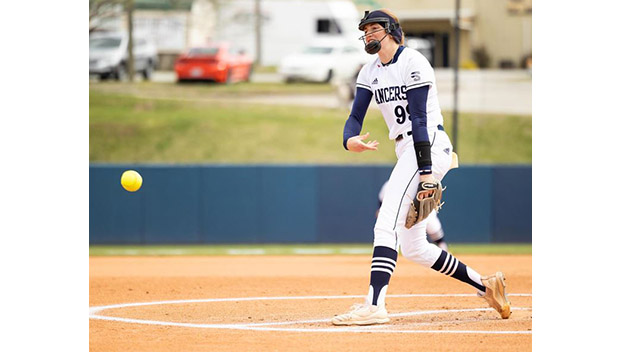 Longwood softball got off to a slow start on Sunday afternoon, but Sydney Backstrom didn’t.

The Lancer ace dominated in the circle, and the Longwood (12-18, 6-3 Big South)  offense came alive in the fourth and fifth innings to key an 8-0 win over North Carolina A&T that polished off a sweep.

“I felt pretty good after this one,” Backstrom said. “I was throwing what I know out there, and it was working. I think the team needed these wins. Obviously the start of the season didn’t go as great as we wanted it to, but now we’re starting to get into it, and we’re getting wins.”

Backstrom (9-9) was electric in the circle and almost unhittable again. After tying a career high with 13 strikeouts in the series opener on Saturday, she followed it up with 11 in the series finale to give her 24 strikeouts through her two appearances, both wins.

“She’s starting to get herself settled into using her pitches, using them to help each other and really throwing her game, which is so important for a pitcher,” said Longwood head coach Dr. Megan Brown when asked about what helped key Backstrom’s success this weekend. “Yes, you scout, and you look at the hitters. And you know how you need to run things, how you need to set things, but great pitchers know how to use their tools within a scout to be successful. And she seems to be very clear on that right now of what she needs to do to be successful.”

This time, Backstrom finished off the shutout by retiring the final seven batters she faced while only giving up one hit. No runners made it to second base in the game for the Aggies (11-17, 2-7 Big South).

Backstrom’s dominance gave the Lancer offense time to solve the puzzle that was S’Niyah Stinson. Stinson stymied the Lancers for the first three innings by not surrendering a hit, but the Lancers broke through in the fourth.

“We got the adjustments finalized,” said Dr. Brown. “It’s like setting a dial. We make this adjustment, and we start seeing these results. All right. That’s one layer. Our next adjustment is here. Every adjustment isn’t an immediate fix. Sometimes it takes two adjustments to get where we want to go, and that’s kind of what we did today. It was kind of two adjustments. One we worked to make in the third and then the last one in the fourth and fifth kind of started breaking it loose.”

“I think this all just shows that we can do it,” Backstrom said. “We’re getting hits, we’re scoring a lot. So we know we can do this now against other teams, and we’re ready.”

Sydney Jacobson went 2-3 on the day and poked a single to left field to lead off the bottom half of the inning. She came home on a perfect squeeze play by Lauren Taylor to give the Lancers a 1-0 lead.

Stinson got out of the jam in the fourth, but the Lancers went off in the fifth with a seven-run inning that ended the game.

Sydney Guess went 2-2 in the inning as the Lancers batted around. Alexis Wayland doubled in a run to start the scoring, and Jacobsen added an RBI single as well. Korynna Anderson ripped a two-run, pinch-hit double before scoring on a Lauren Fox infield single one batter later. Guess’s second hit of the inning ended the game, an RBI single through the right side that made it 8-0.

Stinson (2-5) took the loss for N.C. A&T after giving up six runs on four hits in 4.2 innings while walking four.

“One of the things we always do after win is shoutouts. That’s where they start calling out each other for things like Sydney Guess’s great hit, Sydney Backstrom’s great throwing,” Dr. Brown said. “They start going through it, and you could literally list Lauren Taylor’s squeeze, Korynna Anderson’s pinch hit, all the walks, all the different ways we moved runners, talking to each other on base running, Alexis hollering at the runner in front of her like ‘You’ve gotta go!’ Those are the things that they get the opportunities to see what each other is doing in a positive way and really call out all the great things. They actually lead a lot of the postgame there of just being really excited for each other.

“One of the other things we talk a lot about is it takes all 20 to win. When they work together, it’s fun to be a part of. It’s fun to watch.”