Why rhododendron leaves curl and droop 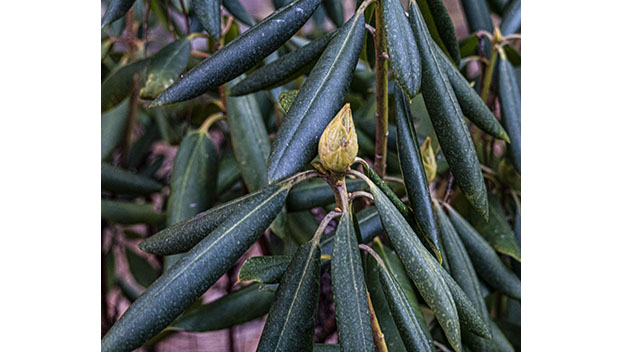 Many gardeners say that they can tell the temperature outside simply by looking out the window at the leaves on their rhododendron. If the leaves are curled and drooped, then it’s very cold. Conventional wisdom has always said that this is a protective response to cold that enables the plant to survive.

The latest theories about this interesting plant behavior seem to indicate that drooping and curling may be caused by two different phenomena. Could drooping be caused by excess light during the winter months? Perhaps. Rhododendrons are typically understory plants receiving sunlight filtered by overhead trees. When those trees shed their leaves during winter, the rhododendrons receive extra sunlight during a time when they are mostly dormant. This extra light may affect chloroplasts and the ability to conduct photosynthesis. Experiments show that when forced to remain horizontal during winter, the leaves were damaged and couldn’t conduct photosynthesis as effectively.

The curling of rhododendron leaves into tight rolls seems to be related to cold temperatures. When rhododendron leaves freeze at around 17 degrees Fahrenheit, ice crystals accumulate and can rupture cell membranes. Rapid thawing makes the problem worse. To survive, leaves need to freeze quickly, thus keeping the ice crystals relatively small, and then thaw slowly. Because there is less surface exposed to the sun, curled leaves thaw more slowly than flat ones.

So…the next time you notice that your favorite rhododendron looks sad and pathetic, just remember, that instead of shivering, it curls to protect itself from cold weather. It should be just fine when warmer temperatures return.