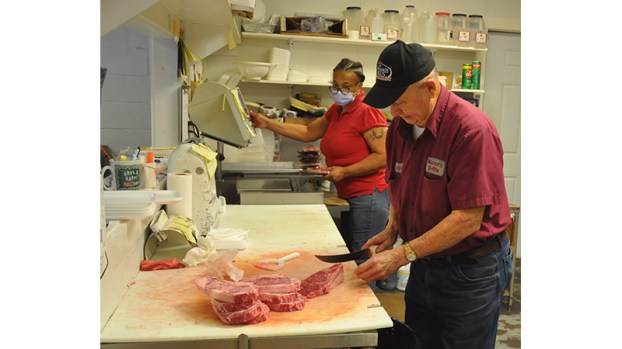 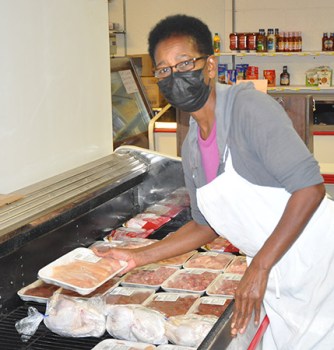 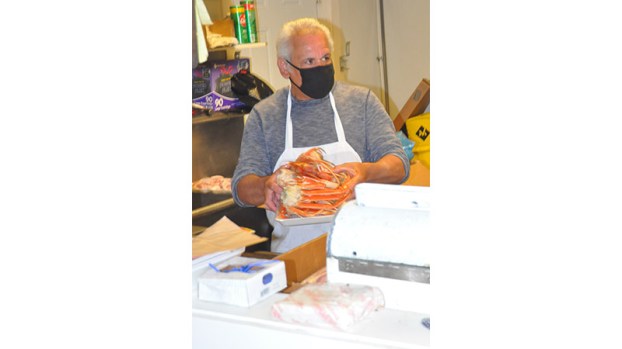 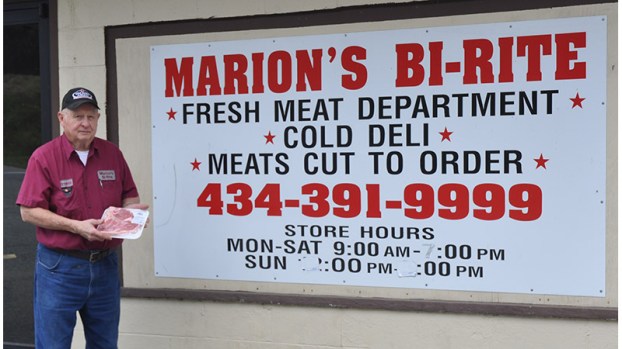 Marion’s Bi-Rite moved to Farmville in 2011, and was started in Cumberland in 1997. (Photo by Shannon Watkins)

There are two things it’s hard to get Ernest Marion of Marion’s Bi-Rite Butcher Shop in Farmville to do in an interview: smile and stop working.

Marion labors diligently every day ordering, cutting and packaging meats and selling them to a steady stream of customers and doesn’t like to stop for the media (but he will, because he’s also polite).

As for smiling, that’s what his customers do.

“If I don’t get it from Costco, it comes from here,” Jane Ghee said, looking through the steak selection. “They have the best meats.” She emphasized the word “best.” Ghee said she’s shopped at Marion’s since the store was in Cumberland.

“I love their steaks, New York strip, I love it,” Ghee said. “I love their hamburger packs. It’s about the only place I’ve been able to find turkey wings. (Bi-Rite also has turkey necks; those are the only prepackaged fresh meats they carry.) And they always have such a nice assortment of meats. I love their pork chops, I like their bacon. I pretty much do my meats here.”

Ardell Reed, soft-spoken, simply said, “Yes,” when asked if she shopped a lot at Marion’s as she went through the checkout counter with four bags of assorted cuts.

Marion’s Bi-Rite is a Farmville institution, selling primarily beef, pork and chicken in various cuts and chops, but you can special-order almost anything you like and he’ll fulfill it for you. “Yeah, we’re trying to order what they want,” Marion said.

The shop operated in Cumberland from May 1997 but moved to its current location in May 2011. Among its handful of employees, some have been there for almost the entire run.

“Nobody cuts meat anymore,” Marion said of why he opened a butcher shop. He started as a full grocery store in Cumberland, but a Dollar General opened up nearby. “The grocery part didn’t do well, so I just closed up and decided to just go to a butcher shop,” he said. “I had a full line of groceries, but I decided I wasn’t going to compete with Dollar General.”

Moving strictly to meat and its accompaniments seemed to work well for Marion, who’s been going strong ever since.

He learned butchering the old-fashioned way. “I was raised on a farm,” Marion said. “We slaughtered our own hogs and had our own smokehouse, so I’m pretty familiar with cutting it up anyway.”

He gets his products from several distributors based on what’s available. If one is out of a certain kind of meat, he can go to another. They come in whole chickens and large pieces of meat. He and his employees cut them down into smaller pieces for sale. “You never see hanging beef anymore,” Marion said, referring to whole sides of beef that used to be the norm.

The meat is fresh and looks it, laid on white foam trays and gleaming under taut plastic wrap. Whole chickens and separate pieces, pork rib racks and thick chops, New York strip steaks and generous ribeyes, ground meats of all varieties — these, plus other products that change from day to day, make it very hard to leave empty handed. And it’s almost impossible to not want to haul out the grill, no matter how hot or cold the weather, and turn it all into something delicious.

You don’t even have to leave Marion’s to gather the ingredients; Bi-Rite has lots of extras, like onions and potatoes, seasoning mixes and breading, sauces and condiments, a freezer full of side dishes and desserts along with various seafoods, another refrigerated case with processed meats like hot dogs, bacon and bologna. That’s not even a comprehensive list and leaves out the array of breads and buns. Not to mention bones for dog treats, pig ears and beef liver and other products.

There’s also a shelf of one-pound plastic bowls packed with chicken, pasta, macaroni and potato salads as well as coleslaw. These are particular customer favorites, Marion said, and are made fresh in the store.

On two separate visits, the customers varied widely but all seemed to be in an eager mood: a smiling gentleman with what sounded like a heavy German accent popping by to ask about ordering several pounds of sliced ham; a tall gentleman elegantly attired in striped green, gold and cream robes and matching kufi hat, intently perused the beef section; several women clustered around the deli window and asked about prices and joked with the employees.

“Yeah, we’re trying to order what they want,” Marion said. Bi-Rite sticks mostly to beef, pork and chicken, but if you want a case of lamb or something exotic, ask. If Marion can order it for you, he will.

What’s his favorite part? “Just knowing the customers, I guess,” Marion said. “I’ve got customers who have been with me for the whole time.”

Perhaps one reason they’ve stuck around is the fact that while the meat-cutting area is separate in the back, everyone can see what’s going on through a window in the wall above the poultry case.

Through it, customers saw Manuel Caban slicing up a slab of pork. Caban has worked off and on for Marion’s since 2000 when the shop was in Cumberland and is now full-time.

“I like it. I love what I do. I’m a people person. I like to make it happen. I like to give everybody a good experience when they shop. Put a smile on somebody’s face, that’s priceless, you know?”

Delois Taylor, who’s been with Marion’s about the same amount of time — “25, 26 years, something like that,” she said — neatly wrapped up chicken before taking stacks of trays out to the sales floor.

“I love it here,” Taylor said.

What’s her favorite part of the job? “Working with me!” Caban said, laughing as he headed for the walk-in refrigerator. Taylor laughed, too.

“I guess doing chicken,” she said before diving back into it. If there was a longer answer to the question, it went unspoken. Marion’s employees, like the Marion himself, stayed busy.

Marion’s business philosophy is as simple as a freshly cut steak.

“There’s nothing I sell here that I wouldn’t take home to my family,” he said, and then, with a courteous goodbye, went back to work.