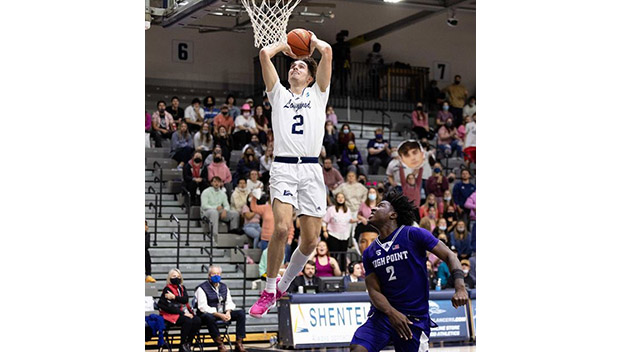 Nate Lliteras goes up for a breakaway dunk. (Photo by Mike Kropf)

Back in front of another boisterous home crowd on Tuesday, Feb. 15, Longwood got back to its winning ways with another last-minute defensive stop.

All but unbeatable in Willett Hall this season, the Lancers showed once again Tuesday the crunch-time poise that’s made them the team to beat in the Big South.

Justin Hill scored 15 points, and Zac Watson had 10 points and five rebounds while keying a critical second-half comeback run as Longwood clinched at least a share of the Big South’s Northern Division title Tuesday, bouncing back from its first conference loss of the season to beat High Point 70-66.

Longwood (19-6, 11-1 Big South) has already set the program’s all-time record for wins in the Division I era. Now at 14-1 in Willett Hall, it also owns the DI program mark for most home wins in a season.

More important, the Lancers have a commanding 4-game lead over Campbell in the Big South’s North Division with four games to go, clinching at least a tie for first in the division by season’s end. And they stayed a game ahead of two-time defending champion Winthrop (10-2) in the quest to earn the programs’ first-ever Big South overall regular season championship.

“It’s huge,” said Head Coach Griff Aldrich of clinching a share of the Big South’s divisional title. “The thought of trying to get to the NCAA, that’s what everybody wants. But this is just really special…. To be here where the guys have won a championship, or at least a share of it, that’s really remarkable. It’s an incredible accomplishment. And it’s on the foundation of a lot of hard of work, a lot of perseverance, a lot of fighting through adversity.”

This one was all about the Lancers showing they could respond after their first conference loss of the season – and first loss at all since December – Saturday at North Carolina A&T.

As has been the case time and again during this historic season, Watson was front-and-center when the game was on the line.

Watson, a senior from Plano, Texas, starred in a key sequence around the 5-minute mark that brought Longwood back from a 5-point deficit. He grabbed an offensive rebound and fed Isaiah Wilkins for a dunk at the 7:05 mark to cut High Point’s lead to 55-52. Just under two minutes later, Watson scored two layups 15 seconds apart that cut the lead to 1, then put the Lancers ahead 58-57, sending the student section into a frenzy.

Longwood had to withstand a withering 3-point shooting attack from High Point, who hit its first four shots from beyond the arc and built a 27-21 lead midway through the first half.

But 3-pointers by Justin Hill, DeShaun Wade and Isaiah Wilkins got Longwood back in gear, and Jesper Granlund got a steal then fed Nate Lliteras for a breakaway dunk at the 3:50 mark before halftime to give Longwood its first lead since the opening minutes.

High Point held the lead and momentum for much for the second half, but the Watson-led rally pulled the Lancers ahead and set up another close finish. Isaiah Wilkins seemed to put Longwood in command with a running jumper as the shot-clocked expired with 1:30 to go, giving the Lancers a 69-64 lead. But High Point (11-15, 5-7) wouldn’t quit, and had a chance to tie it with a 3-pointer that fell short in the final seconds before a free-throw by Hill clinched the win.

“I told the guys I (am) extremely proud of them,” Aldrich said. “I didn’t think it was our greatest effort.” But, in the second half there was no doubt that there was purpose, that these guys wanted to win the game and were committed to winning the game. You could hear it on the bench, you could it hear it during the timeouts.”

Aldrich credited not only this year’s squad but those who came before for the latest milestone of clinching a share of the Big South’s divisional title.

“I think about teams in years past the teams that have really tried to lay a foundation of really being tough and gritty,” said Aldrich, “This is definitely a program championship. I’m super excited for this team, but I’m also super excited for all the players that have come before, and of course the university and fans, this is pretty fun.”

Aldrich is now 8-0 in his Longwood career against High Point. He’ll quickly get another chance to extend that streak when the Lancers travel to High Point on Thursday for a rematch at 9 p.m., before closing out the regular season with home games against Hampton and Radford and at Campbell.