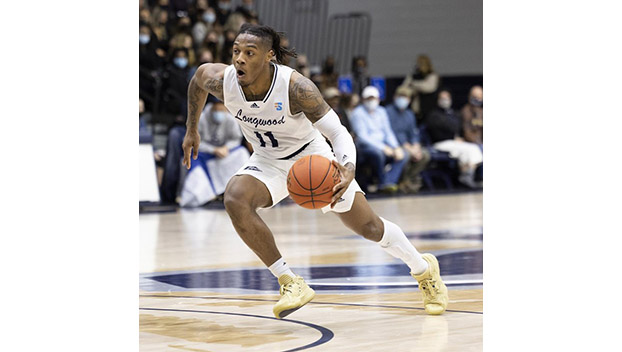 It was loud, it was physical, and it lived up to the hype. Saturday’s clash between the best of the Big South had a post-season-like atmosphere in sold-out Willett Hall.

In the biggest game yet of what’s shaping up to be a magical season, it was Longwood who had the look of a champion.

Justin Hill scored a career-high 29 points, DeShaun Wade and Isaiah Wilkins added clutch 3-pointers in the final two minutes, and Longwood went 22 of 23 from the foul line in an exhilarating 92-88 win over defending league champion Winthrop.

The Lancers had lost five straight and 15 of its last 17 to the Eagles, a perennial Big South power and regular NCAA Tournament participant in recent years. But now it’s Longwood who looks like the Big South’s team to beat. The Lancers are 7-0 in the conference, 12-1 in Willett Hall, and 15-5 overall. No college basketball team in Virginia has won more games this season.

And no student section is having more fun.

“This is an incredible college basketball atmosphere,” said fourth-year head coach Griff Aldrich. “It’s unbelievable. I’ve seen very few atmospheres where there’s just no available seating, people are standing. To think about where we were when we started four years ago, I’m just so thrilled for the students, I’m thrilled for the community members. I think everybody’s having a lot of fun.”

Everybody in Willett got their money’s worth; this battle between the leaders of the Big South’s northern and southern divisions felt like an NBA shootout. Longwood had to withstand a relentless 3-point attack from the Eagles – they were 12 of 26 – that kept the game close even after Longwood built an 11-point halftime lead.

But Longwood got plenty hot, too. After hitting just one of its first seven shots from beyond the arc, the Lancers hit 13 of their last 18 — including daggers from DeShaun Wade and Isaiah Wilkins in the final two minutes that sent the crowd into a final, deafening frenzy.

The hero was no doubt Hill, the sophomore from Houston, whose fearless charges into the lane created a constant stream of buckets and free throws for him – or kick-outs to open teammates for three pointers.

“They’ve got a full game plan to try to stop him and he’s still able to make smart plays,” Aldrich says. “I’m just really proud of him.”

But Longwood wouldn’t have won without a range of weapons in addition to Hill.

Forward Zac Watson dropped in several key baskets in the first half to keep an early Winthrop lead from getting out of hand, setting up a 23-10 run to close the first half that put Longwood up 11.

Winthrop’s hot shooting hand got the lead back to 2 early in the second half. With Longwood up 53-50 at the 12:08 mark, Leslie Nkereuwem – who battled foul trouble much of the second half — backed down his defender for what turned out to be his only basket of the game, then forcefully rejected a shot by Winthrop’s Patrick Good at the other end, setting up a Hill fast break that resulted in two Hill free throws to put the Lancers back up 7.

“Winthrop played really hard,” Aldrich said. “They never quit. Every time I thought we had a little bit of space they’d come down and bang a three or make a shot or make a play. It was really back and forth in the second half.”

The Eagles were down just four at the 2-minute mark, when Hill drove and kicked to Wade for a deep three from seven feet outside the arc to make it 82-75.

Winthrop got within one possession with a minute to go. But with the crowd on its feet, Wilkins hit the shot of the game: an icy three-pointer as the shot clock expired.

From there, Longwood closed out the game with free throws — and after the buzzer joined the student section for another post-game celebration.

After five games in 10 days, the Lancers can briefly catch their breath before heading to UNC-Asheville on Wednesday. Every other team in the Big South has at least two losses.

Aldrich isn’t taking this ride for granted. Almost every conference win has been close – and required clutch play down the stretch to close out.

“We’ve got a special group,” Aldrich said. “The chemistry with this group has been really neat. That’s something that gets talked about but it’s impossible to quantify. But the reality is what goes on in the locker room, back in the dorms, that translates onto the court.”