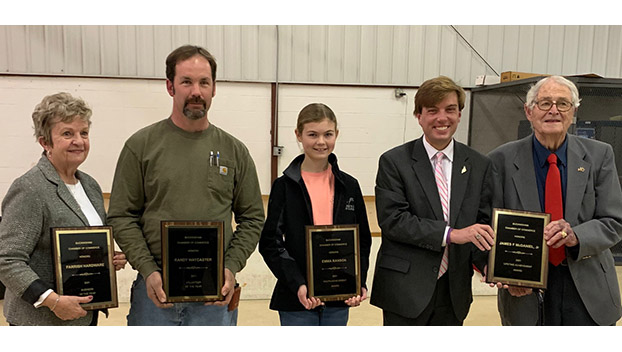 “We are so proud and humbled by our deserving award winners,” Chamber President Thomas Jordan Miles III said. “They offer and have given so much to our communities, and the Chamber feels fortunate that we have them in Buckingham, and their service in the county.”

Miles also noted that the state of the Chamber was very strong and growing, being the largest civic and business group in Buckingham offering steady leadership.

Peter Francisco Soil and Water Conservation District Staff nominated McDaniel for his award. It was read by Kelly Snoddy.

“He’s been volunteering in the Buckingham Community for over 50 years,” Snoddy said. “All who are blessed to know him refer to him as a ‘true southern gentleman.’ His range of volunteer efforts throughout the Buckingham Community is extensive. He is a testament to all of us in his professionalism, dedication, and integrity. His achievements are remarkable, and at the age of 91, he has certainly raised the bar high.

McDaniel has served on the Board of Directors for the Peter Francisco Soil and Water Conservation District (PFSWCD) for over 20 years. The PFSWCD serves Buckingham and Cumberland Counties, and McDaniel serves in the position of a volunteer elected Director for Buckingham County. Prior to serving as an elected Director, McDaniel served as an Associate Director for seven years, from 1992-1998. He also serves as Treasurer of the District.

“I would like to commend one of the cornerstone businesses in Buckingham,” past Chamber President Eddie Slagle said, nominating Farrish Hardware. “This business is a one-man show. The owner (Dee Farrish) greets you at the door, stocks the shelves, points you in the right direction, gives you advice on what you need and how to use it.”

Slagle said, “(If) you need a referral for anything, he knows everyone and will recommend options. If you don’t see it on the shelf, just ask. It’s probably somewhere you overlooked. You would think (that) because of convenience, the prices would be higher than the big-box stores, but I have found the prices to be cheaper …This is obviously a great place to shop because there are always vehicles parked outside. (Farrish) is never too busy to stop and help each and every one.

“Randy is a volunteer firefighter and First Lieutenant and Quartermaster for the Dillwyn Fire Department,” she said. “He has participated in a lot of training through the fire department and is always mentoring younger members, as well as our newer Amish members of the department. He also steps up and helps out with several fundraising events such as the Chicken BBQs and Tractor Pull, along with his fellow firefighters and auxiliary members.”

Waycaster is an active member on several committees at Cedar Baptist Church, which include the Cemetery, Finance, Property, and Nominating committees. “Randy is also very quick to step up and help with the children through Bible School and also helps teach Children’s Church,” Page said. He is also very active and a big help during the Christmas Drive Through at Central Virginia Christian School.

“Cherie Brickhill of CVCS says the Christmas drive-through event would not have been possible the past two years without Randy. He generously gave of his time and expertise to bring all of our ideas to fruition and bless the community with a spectacular Christmas event – no idea was too big or overwhelming, Randy was willing to put the work in to make the event special, and he did it with a smile on his face and joy in his heart. The star raised high above the nativity was Randy’s special creation as was this year’s 50-foot Christmas tree graced with a beautifully welded gold cross on top. Randy created both of these special features to make sure the CVCS Christmas event pointed people to the reason for the season — Jesus.”

Waycaster has also volunteered his time and cooking skills for several events, most recently with his brother and brother-in-law for the Operation Dues Already Paid (DAP) Veteran’s hunt, put on in Buckingham this past year.

Ranson was nominated by Brickhill.

“I have known Emma for the past 9 years as a student at Central Virginia Christian School. Emma excels in the classroom, in the community, and in strength of character. Emma has been recognized on the All A-Honor Roll for all of her eligible years in school. She is an exceptional writer and has won numerous writing awards in recent years including the VFW Patriot’s Pen essay contest. She has been the school’s Bible Bee and Spelling Bee winner multiple years. Currently, Emma serves as the SCA president for Central Virginia Christian School where she leads the executive board, serves as a liaison to school administration, and helps plan both fun and service activities for her peers,” Brickhill said.

Ranson is a member of Bethlehem Baptist Church, where she actively participates in the youth group. Much of her free time is spent involved in horseback riding and 4-H. “Currently, Emma serves as the Secretary for the Pegasus 4-H horse and pony club. At the state show, Emma received second place for her record-keeping. Her team competed in the Horse Hippology contest at the state fair where Emma won first in the junior division and her team placed sixth.

During the year, Emma participates in other events such as horse judging, hippology, equismartz, clinics, shows, and volunteering. “Emma has a particular interest in therapeutic riding; she volunteers weekly and plans to eventually get her certification,” Brickhill stated. Brickhill noted that “Emma is eager to help others. At the beginning of the pandemic, Emma and her grandmother made hundreds of fashionable cloth face coverings. Emma also uses her sewing skills to help make costumes for CVCS programs … Even though Emma has already experienced much success at a young age, she is extremely humble and always willing to help her classmates.”