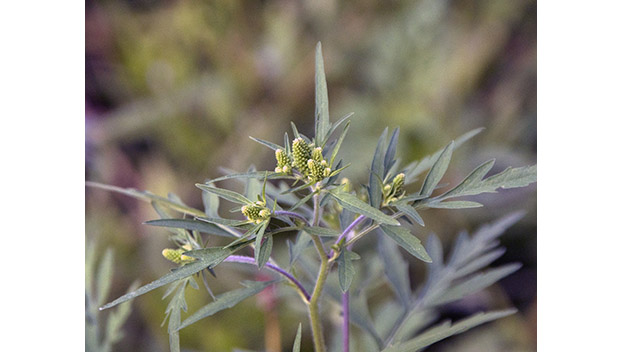 The weed that has gone global and makes so many people miserable every year. (DR. CYNTHIA WOOD)

Have you ever tried to define a weed? I often hear that it’s just a plant that appears where it’s not wanted. By that definition, the magnolia growing in my neighbor’s flower bed and far too close to her house would be a weed. Emerson called weeds plants “whose virtues have not yet been discovered.” Others have tried to develop checklists of the traits that make plants weeds. Characteristics like easy germination, prolific amounts of seeds, efficient mechanisms for seed dispersal, etc.

Weeds are slippery creatures to define. What was considered a useful plant several hundred years ago, might be considered troublesome today. The reverse is also true. In the mid-1800s, the botanist, William Darlington, wrote that some of the most serious weeds to plague agriculture included the oxeye daisy and star of Bethlehem. Red sorrel was also considered problematic. Why? Lime was seldom applied to farm fields, so the soil was very acidic, thus encouraging the growth of those plants. Mechanization and more scientific soil management have eliminated them as problems, but new ones have replaced them.

Maybe it’s just a matter of “I know it when I see it,” meaning the relationship of the plant to human values. For example, if farmers have to invest countless hours and thousands of dollars into the control of destructive plant species in their crops, then they have no difficulty defining weeds.

While many weeds are nonnative species that were inadvertently brought here, others are natives. For example, common ragweed (Ambrosia artimisiifolia). It’s a member of the Aster Family that has evolved to favor efficiency over beauty. It grows in disturbed areas where initially there is little competition from other plants. It’s pollinated by the wind, so it doesn’t need showy petals to attract pollinators, just lots of pollen and some gentle breezes. Much to the dismay of allergy sufferers, a single common ragweed plant can release as many as 10 million pollen grains per day.

Common ragweed has been documented in early human settlements dating at least as far back as 5,000 years ago. By the end of the 1800s, it had spread throughout most of North America. Trash heaps, the construction of roads, the clearing of forests for agriculture, and introduction of railroads all helped spread the plant.

The global dispersal of ragweed began in the 1700s; the ballast used to increase the stability of ships often included soil that contained all manner of seeds, microbes and various other organisms. Needless to say, it wasn’t long before ragweed was found in Europe in areas where ballast from the New World was dumped.

And then World War I triggered the dispersal of ragweed on a massive scale. Between 1914 and 1918, the United States sent almost a million horses, plus hay to Europe. Another 180,000 were sent with American troops. Ragweed tagged along in hay, on clothing, on the horses; it thrived in all the areas that had been disturbed by the war. During the 1950s, ragweed traveled with troops to Korea. Ragweed is a classic polemochorus plant, meaning one dispersed through armed conflict.

As ragweed escaped its native environment, it began to behave differently. It invaded forests and parks where it behaved like a classic invasive plant with increased competitive ability. Just like Japanese stilt grass behaves here.

Gardening at the end of the season