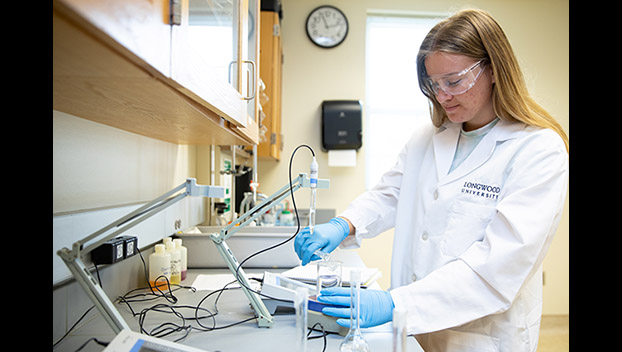 Growing up in Isle of Wight County in Virginia’s tidewater region, Longwood chemistry major Kaleigh Beale ’22 was puzzled about why many of her elementary school friends had brown stains on their teeth. She asked her parents what was causing this problem and why her teeth were not stained.

Most of the county’s residents get their drinking water from a well and naturally occurring high fluoride levels in groundwater can cause mild to severe tooth discoloration during adolescence, when teeth are still forming.

“We’re mostly on well systems in Isle of Wight County,” Beale said. “But the difference was we filtered our water so my teeth didn’t get brown. Not everyone has the resources to filter their water, but my parents did.”

Fast forward to her senior year at Longwood and Beale is now using her senior thesis project to investigate the fluoride content in the county’s water and propose possible solutions that will help residents mitigate high levels in the drinking water. Children and the elderly are most at risk for health complications caused by regularly drinking water with high fluoride levels and the county has issued drinking water advisories.

“I talked with a lot of community members and they were all adamant that there’s a problem with our water and it needs to be solved,” Beale said. “It’s expensive to have a Brita filter to filter your water all of the time. My goal is to give them a cost-effective way to detect and remove the fluoride from their water.”

Working with Dr. Sarah Porter, professor of analytical chemistry who is overseeing the thesis project, Beale spent about five to six hours a week this semester conducting lab research. They purchased a $400 device that enables them to use the standard method used in a professional lab that does water testing.

According to the World Health Organization, 1.5 parts per million (ppm) is an acceptable limit for fluoride levels in drinking water. Long-term consumption of drinking water that has fluoride levels of 4.0 ppm and above can cause skeletal fluorosis, a chronic bone and joint disease that causes bones to become weaker and more brittle.

Beale, a chemistry major with a minor in biology, gathered five water samples from locations in Isle of Wight County, including samples from her own family members’ homes. What she learned was unsettling, although based on her experiences not that surprising.

“People are just drinking it,” Beale said, adding that her grandmother had not been filtering her water but that she will be getting a water filter soon.

Ultimately, she hopes to produce a brochure or informational product to be distributed to members of the community that explains ways they can detect and remove fluoride from their water. She also plans to share a report of her findings regarding the fluoride levels of her samples with county leaders.

Fluoride is a naturally occurring mineral and some communities have larger concentrations than others. Agricultural runoff in rural areas can also contribute to higher levels of fluoride in groundwater.

This fall Beale experimented with using dyes that change the color of fluorinated water based on different concentrations of the mineral. For example, if a dye was added to water with a low concentration of fluoride it would be pink but at higher concentrations, it would turn orange.

“Those are some of the cheaper and easier solutions we are investigating,” she said

Beale also bought a water test kit from Amazon and found that its results weren’t accurate as far as detecting fluoride levels. She noted that this is relevant since this is a method that is easily accessible to the public, although not necessarily useful.

In the spring semester, Beale plans to investigate and study cost-effective fluoride removal methods, such as filtering with charcoal and aluminum powder.

The senior thesis program is voluntary and students are required to develop their project and pitch it to the senior thesis committee. This spring Beale will write her thesis and present it at Longwood, in addition to submitting it for presentation at professional conferences.

“She’s doing a great job and it’s because she is doing something that she is interested in,” Porter said. “When you do chemistry research I think most people think it’s just spending time in the lab but there’s a lot more to it than that for senior thesis students. There’s a significant writing component as well.”

Beale, who will graduate in May 2022 with honors, plans to attend medical school. She is a member of the Cormier Honors College for Citizen Scholars and also part of Longwood’s LIFE STEM program.

She said one of the reasons she decided to do a senior thesis was to get experience doing intensive research as she looks toward medical school and narrowing down what type of job she eventually wants to pursue. She said so far she has learned that she does not want to do medical research or work primarily in a lab setting.

“While I’m passionate about my topic, I decided I want more of a dynamic working environment,” she said. “However, I do like the problem-solving aspect of research and overall my passion for medicine drove me to try to help my community using what I’m learning at Longwood.”